History Does Not Come in Black and White

Oct. 11, 2019—The first issue of the revived Bulletin of Loudoun County History is a “must-read” for those seriously committed to achieving racial harmony in the United States. Three of the articles in the yearly journal focus on the Virginia “Readjuster” movement, a black-white alliance which achieved extraordinary, if temporary, gains for the formerly enslaved in the capitol of the Confederacy. The Readjuster movement has been virtually written out of American history until now, but its relevance to understanding our past should be obvious. 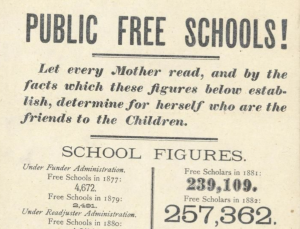 The three articles devoted to this topic are: 1) A Study in Civil Rights: The Delegates of the 1883 Mass Meeting by Donna Bohanon; 2) The Readjusters: The Black-White Alliance That Once Governed Virginia by Edward Spannaus; and 3) The Readjuster Movement in Loudoun, 1877-1885 by Wynne C. Saffer.

The Bulletin is available for $15 on Amazon.com, and I encourage you to get it and read it cover to cover (only 126 pages). It is published by Diversity Fairs of Virginia, and edited by Larry Roeder, CEO of Diversity Fairs. But in this post, I want to focus in on the history of the Readjusters, as reported by (my husband) Ed Spannaus in his article.

An “Interracial Political Alliance” in Virginia

Many will find the story hard to believe, but the facts are there to prove it.  Between 1879 and 1883 (i.e., after the formal period of Reconstruction, when Federal authorities played the role of enforcers of the post-slavery era) an interracial alliance between poor and working-class whites, and recently emancipated Blacks, governed Virginia and several of its major cities. Their collaboration was based on their joint desire to “readjust” the state’s prewar debt, the payment of which was cutting the funding for public schools and other government services.

An image of Virginia Normal and College Institute (later Virginia State University), founded in 1882 in Petersburg.

The most dramatic case of the benefits of Readjuster power was Petersburg, Virginia’s largest black-majority city. The Readjuster majority in the state legislature obtained a black college and mental-health asylum for Petersburg. The Readjuster-controlled city government improved the streets and the water system, brought in streetlights and a streetcar system, appointed a black public health officer, and subsidized prescription drugs (!-ed.), among other things.

One of the most significant achievements of Reconstruction itself had been the adoption of the 1870 Underwood Constitution, which, for the first time, mandated the creation of a public school system, with a dedicated source of funding. However, the first post-Reconstruction legislature also passed a Funding Act, which required the state to pay off its prewar debt. It wasn’t long before funds legally designated to go to education were being diverted to pay the debts (many of which were held by British bondholders). By the end of the 1870s, many schools began to be closed for lack of funds.

It was in this environment that the Readjuster alliance began to emerge as a powerful movement. A Readjuster Party was officially formed in February of 1879, and in the fall election, scored a dramatic victory in the state elections. In what was effectively a referendum on debt payments versus school funding, the Readjusters won 56 seats in the 100 delegate House, and 24 of 40 seats in the Senate.

Help from an Unlikely Source

But, as Spannaus explains, that electoral victory was not sufficient to spur the needed changes. Distrust between whites and blacks ran deep. What changed the situation was the 1880 election of former Confederate General William Mahone to the U.S. Senate. Mahone had associated himself with the Readjusters since 1877, strongly opposing the diversion of school funds to paying the debt. When he was voted by the Readjuster-dominated Virginia Senate to become a U.S. Senator in 1881, he joined the Republican Party. 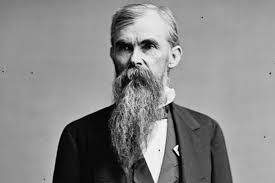 Mahone then used his power as a Senator to appoint supporters of the Readjusters to local office around Virginia and build up a statewide political machine.

As a result of Mahone joining the Republicans, Spannaus reports, an all-black GOP convention, meeting in March 1881 in Petersburg, decided to form an alliance with the Readjusters. In turn, a subsequent Readjuster Party convention endorsed the Petersburg political agenda, which included free schools, and expanding the access of blacks and lower class whites to juries and the ballot.

This new political alliance elected a Readjuster governor, William Cameron, in the election of 1881, as well as maintaining the Readjuster majority in both houses.  A sweeping set of reforms followed. To quote Spannaus:

First was a major infusion of funds into the public schools, allowing both black and white schools to reopen. The poll tax was repealed, and the whipping post was abolished. State asylums and institutions of higher learning received increased funding. Real estate taxes were lowered, and more of the tax burden was assumed by corporations, especially railroads. Even dueling was outlawed.

In cities where a Readjuster-Republican alliance was in control, such as Danville and Petersburg, there were even more dramatic improvements, including provisions for public health, urban infrastructure upgrades, and the employment of black educators for the black schools. The number of black teachers, black principals, and black schools dramatically increased up to 1883.  The General Assembly even mandated equal pay for black and white teachers (a measure subsequently repealed when the Readjusters lost power).

A Note on the Opposition

Of course, these changes did not occur without facing substantial opposition. It was led by what was popularly referred to as the “Bourbons,”[1] the deeply rooted aristocracy which disdained the poor white population almost as much as it did the formerly enslaved blacks. The Bourbons steadfastly opposed free public education as well. Their nightmare was that a black-white alliance would come together to break their power. And their ace-in-the-hole was to play the race card. 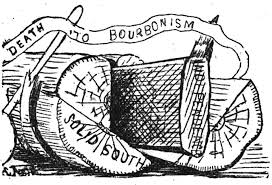 A Readjuster political cartoon shows Independence destroying the power of the Bourbons over the South.

And play it they did. A race riot conveniently broke out in Danville right before the 1883 state election, and was used by the Bourbon-controlled Democratic Party to defeat the Republicans and Readjusters. By 1901-2 the Democrats felt secure enough to ram through, by proclamation, a new state Constitution which re-established the poll tax, and put up blocks to voting like the literacy and “understanding” tests. The new rules disenfranchised blacks—and a huge number of white voters as well. The political combination needed to achieve full-fledged Jim Crow policies was now in place.

There’s plenty to think about in light of these revelations about the Readjuster movement. Why has this history been suppressed?  How could such an alliance be created under the leadership of a former Confederate general? (That general, of course, has been excoriated as a traitor by the Lost Cause movement to this day.)  Could the idea of allying for a program of economic and social progress, against the resistance of the bankers and their allies, be applied to our situation today?

Most critical is to recognize the fact that history does not move in a straight line; nor is it painted in black and white. Opportunities arise at certain historical periods that must be seized in time by political leaders with visions for the future, or they will be lost for decades. And we ignore our history at our peril.

[1] The term comes from the French royal dynasty of that name.