Washington, D.C., April 16, 2018—“Big Is Beautiful,” argue the authors of a new book by that name presented at the National Press Club today. In a panel discussion moderated by Financial Times editor Edward Luce, co-authors Rob Atkinson of the Information Technology and Innovation Foundation (ITIF)   and historian Michael Lind extensively presented their case that the demonization of everything “big” in the United States is harmful to the progress of the economy.

Big Is Beautiful, Debunking the Myth of  Small Business was released by MIT Press in March. 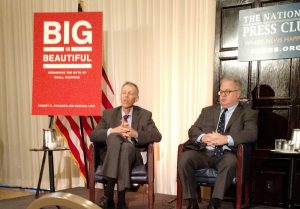 While much of the argumentation was enlightening and apt, I believe the book as a whole misses the mark by failing to put forward the American System tradition which has historically countered Jeffersonian romanticism, reborn in the 1973 with the “Small is Beautiful” movement.

Atkinson summarized the book’s thesis thus: If you want to maximize progress in our nation, large firms are central to that goal. He reviewed, in rapid-fire fashion, statistics to prove the point that larger firms pay much higher wages (54% more than small firms), give better benefits, are more likely to pay their taxes and enforce workers’ rights, and contribute more to innovation through R&D, than small firms (defined as under 500 workers).  While small businesses created more jobs, most of those businesses do not survive. Nor does the data bear out the charge that large firms have higher income inequality, he said.

His conclusion? U.S. public policy must become size-neutral. While new firms should be helped, any special advantages should end after 4-5 years. It is time to overturn what he called “neo-Brandeisism,” the ideology which 20th Century Supreme Court Justice Louis Brandeis enunciated in the phrase: “Size is the mark of Cain.”

Lind then took up the historical evolution of what he called “megalophobia” in the founding myths of the nation, especially the Jefferson ideal of the “yeoman farmer.” This later became the “yeoman retailer,” the “craftsman,” even the “yeoman bank.” This ideology has now taken over both the progressive left and the libertarian right, he said, but it goes against the actual historical development of economic progress in the United States.

Later, he usefully raised the fact that the labor movement, especially in the private sector, used to play a crucial role against such romanticism. Labor knew the importance of economies of scale, and the benefits of working for big companies that could be unionized, and pay workers at decent levels. Labor also worked with the civil rights movement to make advances against racial discrimination, which were much more easily achieved with large corporations than small establishments (cf., the rural South). 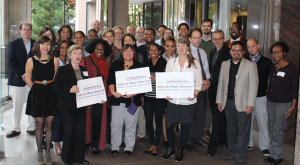 Jobs to Move America, an alliance of labor, civil rights, and other groups.

In the panel dialogue, which lasted over an hour, Luce prodded the authors on the question of competition with China, the power of the state, political corruption, and the abuses by monopolies such as Facebook. Atkinson took the lead in answering, often sharply, about the stupidity of blaming “bigness” for other problems, but he also took on the change in culture in corporate America. There used to be a concept of “corporate statesmen,” business leaders thinking of advancing the country as a whole, he said. Companies must do more in this regard. He also noted that it is the financial sector, which the book does not deal with, which reflects some of the worst abuses.

The short question and answer period permitted this author to raise the question of Alexander Hamilton, whose name and American System are surprisingly not even referenced in the book. Hamilton’s methods were used to build our country, and his thought provides the perfect antidote to the Jeffersonian ideology, so why did you not raise this fact?  Lind responded that he has written three books about Hamilton and his legacy, and considers himself a Hamiltonian; he thinks Atkinson does also.

Unfortunately, he left it at that.

The real obstacles to reviving productivity and progress in the U.S. economy cannot be addressed without taking a Hamiltonian approach on everything from finance, to infrastructure, and productivity growth. Hopefully, this book will play a positive role in getting rid of some of the ideological rubbish that is getting in the way.