May 10, 2021—On May 4, Nevada became the second state in 2021 to pass a resolution urging Congress to establish a National Infrastructure Bank (NIB) based on the time-tested principles used by America’s most successful presidents. As outlined in HR 6422 (116th Congress), Congress would create a bank solely devoted to infrastructure, and capitalized by existing Federal government debt, authorized to lend $4 trillion for vital infrastructure projects around the nation. 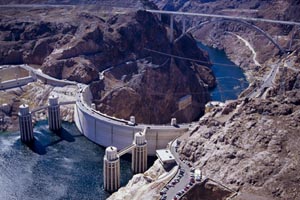 Dams are critical to Nevada’s energy and water supplies, and many are desperate for repair. Here is the famous Hoover Dam.

The Nevada resolution passed both houses of the legislature in early May with overwhelming bipartisan support.  The vote in the Senate, which includes 16 Republicans out of 42 members, was unanimous.

The Nevada legislature joins that of Maine, which passed a similar Memorial to Congress in March. More states are sure to follow.  On May 5, the Illinois House passed HR20, which also calls on Congress to pass legislation establishing an NIB.

AJR7 begins by outlining the extensive infrastructure needs of the state, as graded by the 2017 report card of the American Society of Civil Engineers (ASCE). The scores ranged from a low of D- for dams to B- for bridges and wastewater treatment. In detailing the potential benefits of the NIB, the resolution takes note of the state’s desire for a high-speed rail line linking Las Vegas to Los Angeles. The needs to upgrade and repair Nevada’s drinking water infrastructure alone are estimated to require nearly $10 billion over the next 20 years. Since 28% of Nevada’s land area is desert, water management and treatment is especially critical.

The tallying-up of simply the state’s most immediate repair needs in AJR7 helps explain the national appeal of the NIB, as an urgent and clearly affordable supplement to the infrastructure plan proposed by the Biden administration, which calls for approximately $957 billion in spending on physical infrastructure improvements. 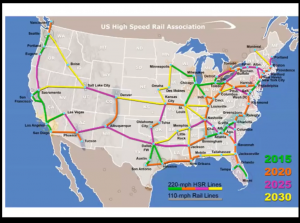 A $4 trillion bank like the proposed NIB is necessary to launch major projects like this high-speed rail plan from the U.S. High-Speed Rail Association.

Nevada’s needs are only a small slice of the country’s physical infrastructure needs. The ASCE’s estimate of the total requirement (on top of funds already expected) amounts to more than $1.1 trillion over the next 10 years.  While this estimate includes some upgrades in terms of resilience against expected environmental changes, it does not anticipate needed leaps in technology, such as building high-speed rail networks, national broadband, investing in next-generation nuclear technology, and the like.

Parsimony in an infrastructure plan will mean that, unlike in FDR’s New Deal, certain sections of the country will have their vital needs unmet. Rather than creating a sense of national unity, where every American citizen feels the benefit of the investment, an inadequate plan will feed the resentments that are already ripping our political life apart. Failure to invest in the next generation of technology will also deprive us of the boost in productivity which we need to provide a better life for all our citizens, and those in need around the world.

Infrastructure spending, historically called internal improvements, has always been seen by advocates for the American System of Economics as a means of not only building prosperity but also of uniting the nation for future progress. President Kennedy was the last president to bring the nation together around a common aspiration, when he set the goal for putting a man on the Moon in May of 1961.  Despite considerable opposition at the start, the Apollo project ultimately became a huge source of national pride, optimism, and progress for all. Its huge costs ultimately paid the nation back with leaps in productivity in virtually all areas of the economy.

The movement promoting the National Infrastructure Bank aims to build a groundswell “from the bottom up” to get the successor to HR 6422 introduced into Congress and passed. Twelve other state legislatures are considering Memorials to Congress on the bank. Labor and civic organizations have endorsed the bill and have been joined by nearly two dozen local government bodies.

In addition, it is circulating an Open Letter to Congress, which calls on Congress to move on a new bill, now capitalized to the level of $5 trillion, since the needs have increased.

More information can be found at https://www.nibcoalition.com/.

Nancy Spannaus is the author of Hamilton Versus Wall Street: The Core Principles of the American System of Economics, available here.