March 3, 2020—The Legislative Conference of the National Association of Counties (NACo) has gone on record in support of establishing a National Infrastructure Bank. NACo represents the more than 3000 counties in the United States. Its legislative conference was held in Washington, D.C. from Feb. 29 to March 4. 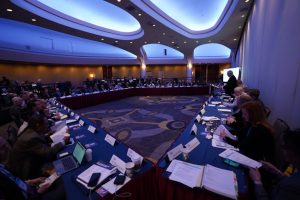 On the recommendation of the Transportation Steering Committee, the Board of Directors endorsed the following resolution on March 2:

Issue: According to the American Society of Civil Engineers and the U.S. Congress, there is a budget shortfall of over $2 trillion needed to finance urgently needed infrastructure programs. Current budget estimates cut discretionary funding. Also, this does not include much needed programs such as broadband, passenger transit systems, high speed rail, clean water supply projects, flood control systems, energy distribution systems, ferries, fish passage barriers and power grid upgrades. Therefore, the real financing need is well over $4 trillion. The National Infrastructure Bank (NIB) would finance projects within all regions of the U.S. In the past, the United States has employed four National Banking systems to build out the infrastructure, and the proposed new legislation follows in that successful model and tradition.