Dec. 12, 2019—While the Federal Reserve, Wall Street, and most politicians brag that the American economy is doing just fine, a study released November 19 by two non-profits provides new information to the contrary: More than two million Americans lack access to clean  water. The report “Closing the Water Access Gap in the United States” was produced by DigDeep and the U.S. Water Alliance, which worked with census data and some  academics to try to quantify the numbers of Americans who today lack running water in their homes.

I came across this study thanks to the American Society of Civil Engineers, which tweeted about a Washington Post article on the subject. The ASCE itself gave U.S. drinking water infrastructure a D grade in its 2017 report card (the latest available). It summarized the situation as follows: 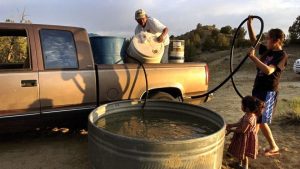 Navajo Indians have to go to great lengths to provide water to their community, as we see here.

Drinking water is delivered via one million miles of pipes across the country. Many of those pipes were laid in the early to mid-20th century with a lifespan of 75 to 100 years. The quality of drinking water in the United States remains high, but legacy and emerging contaminants continue to require close attention. While water consumption is down, there are still an estimated 240,000 water main breaks per year in the United States, wasting over two trillion gallons of treated drinking water. According to the American Water Works Association, an estimated $1 trillion is necessary to maintain and expand service to meet demands over the next 25 years.

The DigDeep report focuses on six “hot spots” where access to potable water and indoor plumbing is still lacking in the United States.  They are California migrant labor communities; Indian reservations such as the Navajo; Texas colonias (Hispanic settlements along the Texas-Mexico border); rural communities in the deep South; Appalachia; and Puerto Rico. In all these places, whole communities lack indoor plumbing and are often forced to resort to contaminated water sources to meet the necessities of life.

This travesty is compounded in urban areas like Chicago, Detroit, Flint, and Newark, where ancient water infrastructure has led to contamination of the water supply, threatening the health and welfare of the population.

Lack of access to clean water is no trivial problem. Globally, the World Health Organization estimates that more than two billion people lack clean drinking water. Exposure to contaminated water is linked to the spread of deadly diseases such as cholera, diarrhea, dysentery, and typhoid fever. Such diseases used to be endemic to the United States before what some have designated as the “first public health revolution” of 1880-1920, when this country built the sanitation infrastructure that was a major component of improving public health and life expectancy. 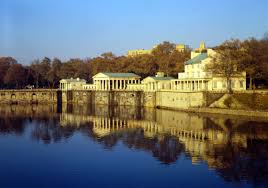 The Philadelphia Waterworks, built in the early 19th century.

Even more shocking is the fact that the United States is actually moving backwards in this area today. The DigDeep study reports that the number of people (and communities) lacking access to clean water actually increased in Delaware, Idaho, Kansas, New Hampshire, Nevada, South Dakota, and Puerto Rico over the period of 2000 to 2014.

This should not be surprising. It is the lawful result of a lack of Federal commitment to investing in and modernizing the nation’s water infrastructure. According to the report, in 1977 the Federal government provided 63% of the capital investment in water infrastructure; today that figure is less than 9%.

The solution lies in reversing this trend on a grand scale, by establishing a Federal credit institution (National Bank for Infrastructure) which will supply the trillions of dollars needed to the states and communities which will build the needed water mains and sewage treatment plants, along with vital transportation and energy infrastructure.

Such would be the tried and true American System approach, which our early statesmen such as Benjamin Franklin and Alexander Hamilton applied to upgrading the water systems of Philadelphia and New York City, respectively. In both cases, their proposals were aimed at dealing with the threat of disease spread by filthy water. In 1801, the City of Philadelphia took up Franklin’s idea and became the first city in the United States to provide free potable water to its citizens. As the history section of the Philadelphia Water Department reads:

While a number of private water companies had been established in other cities by that time, Philadelphia, with its city-owned and financed system, was one of the first in the U.S. to take on water supply as a municipal responsibility. Water was piped throughout the city, with paying customers served by direct lines to businesses and houses, and free water provided through public hydrants to anyone with a bucket to carry it in.

Such is the commitment to the public welfare which we need to see nationwide today.