Memorial Day and the Road to Reconciliation

By Edward and Nancy Spannaus

May 30, 2021—In his Second Inaugural Address, which occurred only 41 days before his assassination, President Abraham Lincoln concluded with an appeal for bringing the nation together:

As we all know, Lincoln’s fervent wish was not fulfilled. The measures needed to heal the nation with unifying and just economic reconstruction were largely sabotaged, foredooming us to suffer the evil racism and rancor whose legacy remains today. 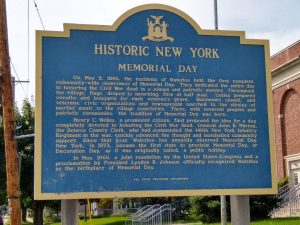 Waterloo, NY is one of many towns claiming early celebration of Memorial Day. (Ed Spannaus)

But, as usual, there is more to the story. For as the nation moved to commemorate its war dead, that spirit of reconciliation did indeed appear, and in the most unlikely places. Let us review the story of Memorial Day, which was originally called Decoration Day.

There are many claims for the origination of Decoration Day – most of them probably accurate – for there were organized efforts in many towns and cities around the country, both North and South, to honor those who gave their lives in that most destructive of wars, in which over 600,000 Americans died, far exceeding the number killed in any war since.

—Warrenton, Va. says that the first Civil War grave ever decorated was there, on July 3, 1861.

—Charleston, S.C. also has a plausible claim. During the war, the Charleston Race Course served as a prison camp; over 250 Union prisoners were buried there in unmarked graves. Black residents of Charleston, along with teachers and missionaries, cleaned up the burial ground and erected an arch with the inscription, “Martyrs of the Race Course.” Nearly 10,000 people attended the commemoration on May 1, 1865, and most brought flowers; the event was reported in the New York Tribune and other national papers.

By 1866, a number of observances took place, including Macon and Columbus, Ga., and Richmond, Va., and Carbondale, Ill. From Columbus, Georgia, the Ladies Memorial Association invited the ladies of every Southern state to join them in honoring the Confederate dead on April 26. One such event, often cited, was in Columbus, Mississippi, where women placed flowers on the graves of the Confederate dead; and seeing the graves of Union soldiers neglected, they placed flowers there also.

–Waterloo, N.Y. claims to be the first town to devote an entire day to honoring the Civil War dead, held in May 1866.

The first large and nationwide observances took place on May 30, 1868: the official birthdate of Decoration Day. 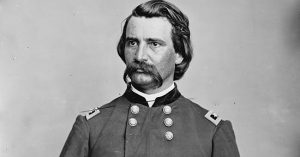 On May 5, 1868, Major General John Logan, the commander in chief of the Union veterans’ association, the Grand Army of the Republic (GAR), issued General Orders No. 11 of the GAR, which directed, in part:

The 30th day of May, 1868, is designated for the purpose of strewing with flowers or otherwise decorating the graves of comrades who died in defense of their country during the late rebellion, and whose bodies now lie in almost every city, village, and hamlet church-yard in the land. In this observance no form of ceremony is prescribed, but posts and comrades will in their own way arrange such fitting services and testimonials of respect as circumstances may permit….

We should guard their graves with sacred vigilance. All that the consecrated wealth and taste of the nation can add to their adornment and security is but a fitting tribute to the memory of her slain defenders. Let no wanton foot tread rudely on such hallowed grounds. Let pleasant paths invite the coming and going of reverent visitors and fond mourners. Let no vandalism of avarice or neglect, no ravages of time testify to the present or to the coming generations that we have forgotten as a people the cost of a free and undivided republic.

If other eyes grow dull, other hands slack, and other hearts cold in the solemn trust, ours shall keep it well as long as the light and warmth of life remain to us.

Let us, then, at the time appointed gather around their sacred remains and garland the passionless mounds above them with the choicest flowers of spring-time; let us raise above them the dear old flag they saved from dishonor; let us in this solemn presence renew our pledges to aid and assist those whom they have left among us a sacred charge upon a nation’s gratitude, the soldier’s and sailor’s widow and orphan….

Gen. Logan was also a U.S. Congressman from Illinois, and he introduced a bill in Congress, proposing to set aside May 30 of each year as Decoration Day.

A Solemn Occasion, But …

That May 30, 1868, saw the first large-scale observance of Decoration Day, with ceremonies held at 183 cemeteries in 27 states. The largest ceremony was held at Arlington National Cemetery, with about 5000 people attending. American flags were placed on all veterans’ graves –the same as today.

Various Washington officials, including General and Mrs. Ulysses Grant, and General James Garfield, presided over the Arlington ceremonies. After the speeches, children from the Soldiers’ and Sailors’ Orphan Home and members of the GAR made their way through the cemetery, spreading flowers on the 20,000 graves, both Union and Confederate, and singing hymns and reciting prayers. 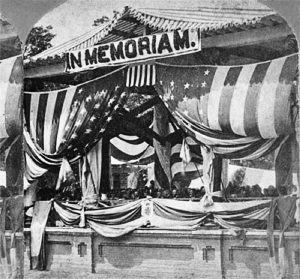 By the end of the 19th century, Decoration Day ceremonies were being held on May 30, throughout the Nation. Many state legislatures passed proclamations designating the day as Memorial Day, as it became known over time.

After World War I, it was broadened to include those who died in all U.S. wars.

In 1971, the date for commemorating Memorial Day was changed to the last Monday in May, in order to create a three-day weekend. This was largely due to the efforts of business and commercial interests who wanted another extended weekend for shopping and entertainment. Efforts of veterans such as the late Senator Daniel Inouye to restore the commemoration to its original date have so far failed to take hold.