July 26, 2017—As the Republicans seek to ram through their slash-and-burn alternative to Obamacare, a mobilization is currently underway, led by a number of groups spun out of the Bernie Sanders presidential campaign, to push through the only alternative on the table—Rep. John Conyers’ H.R. 676 single payer bill, also known as Medicare-for-All. Marches, rallies, and press conferences have been underway across the United States this week, in an attempt to build pressure on Congress to finally take action.

Conyers’ bill, which he has put before the House since 2003, currently has 115 cosponsors, including some among conservative Democrats known as the Blue Dogs. A petition campaign launched by the political action committee Justice Democrats in March, has garnered more than 120,000 signatures for a platform that features the Conyers’ bill, along with demands for raising the minimum wage, instituting a financial transaction tax, and the like.

The weakness in the mobilization lies in its failure to address the core economic issues which underlie the health care emergency in the United States. A universal, humane health care system demands a growing economy, and that can only be achieved by carrying out a u-turn in U.S. economic policy back toward scientific and technological growth, and the launching of a massive infrastructure-building program across the board. The U.S. economy is currently effectively bankrupt, as the collapse of vital infrastructure, growing budget crises, and increased corporate bankruptcies should tell us.

So to carry out such a program, the current bubble economy must be jettisoned with the immediate re-enactment of FDR’s Glass-Steagall banking separation, and the establishment of new institutional arrangements for low-cost Federal credit for rebuilding the transportation, power, water, and health infrastructure of the country. The nation must urgently be protected from the danger of a new financial crash, and a sustainable financial infrastructure set up to achieve economic growth.

As President Franklin Roosevelt understood when he moved on Glass-Steagall in his first 100 days, the nation’s general welfare depends upon establishing a sound financial system, where greedy speculators no longer control the economy, and the Federal government guarantees the flow of credit into areas of urgent need. Social Security was enacted two years later for good reason. 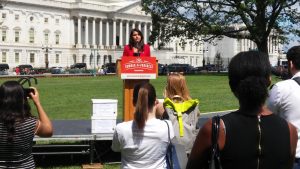 Thus a mobilization for Rep. Marcy Kaptur’s H.R. 790, the Return to Prudent Banking Act, is the crucial companion to the drive for the Conyers’ bill. H.R. 790 has 57 sponsors; the Senate 21st Century Glass-Steagall bill introduced by Sen. Elizabeth Warren has 9. Then the establishment of a new credit institution must follow.