March 17, 2021—On March 11, the Maine Legislature unanimously approved a joint resolution calling on the U.S. Congress to develop and fund a National Infrastructure Bank. SP 297, a “Joint Resolution Memorializing the President of The United States and The United States Congress to Establish A National Infrastructure Bank,” was presented to the full Senate Chamber on May 10.

According to a story in the local paper knox.villagesoup.com, sponsor Sen. David Miramant motivated the memorial as follows: “Here in Maine much of our infrastructure is in disrepair. … A National Infrastructure Bank that invested in our roads, bridges and other infrastructure projects would generate new, good-paying jobs and bring money back into our economy.” 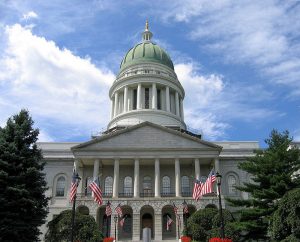 The Maine State House in Augusta.

Maine has become the first state this year to pass a memorial in favor of the National Infrastructure Bank concept contained in HR 6422, a bill initiated by Illinois Rep. Danny Davis in the last Congress. HR 6422 called for establishing a bank specifically dedicated to funding infrastructure with lending power of up to $4 trillion, based on capitalization from existing Treasury debt. Estimates are that such an investment could create upwards of 25 million union-scale jobs.

Memorials urging Congress to act have also been introduced in at least one house of nine other state legislatures: Alabama, Arizona, Illinois, New Mexico, North Carolina, Ohio, Rhode Island, South Carolina, and Virginia. The citizens’ movement promoting the bank has also succeeded in passing resolutions in numerous city councils, labor unions, county governments, and civic organizations around the country. Among the most notable are the Pennsylvania cities of Philadelphia and Pittsburgh; Akron and Toledo, Ohio; and Providence, Rhode Island.

The movement for establishing a National Infrastructure Bank large enough to address the nationwide scope of the infrastructure crisis in the United States has been growing over several years. Over the past months, activity has increased in intensity, with the hope that the new administration can successfully bring the nation together around a gigantic push for not only repairing, but upgrading the country’s obsolete and collapsing transportation, electric, water, and communications networks.

The movement behind the NIB looks specifically to following the Hamiltonian American System model of financing, as carried out by the First and Second National Banks, the Lincoln administration, and Franklin Roosevelt’s Reconstruction Finance Corporation.