In honor of Abraham Lincoln’s birthday

February 11, 2021–“Let us have faith that right makes might, and, in that faith, let us, to the end, dare to do our duty as we understand it.”  Those were the words with which presidential aspirant Abraham Lincoln concluded his speech at Cooper Union in New York City on February 27, 1860. That speech, Lincoln’s first in the East, was widely credited with boosting his stature as the potential Republican candidate. 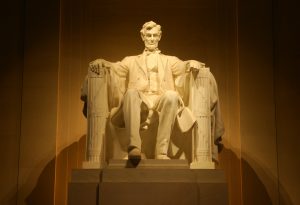 Lincoln’s argument in that speech was in many respects a historical tour de force, as he painstakingly reviewed the record of the Founding Fathers against the expansion of slavery into the territories of the United States. It’s a long speech, more than 7000 words, and for many, will be difficult reading.

But in honor of that great President on his 223rd birthday, I recommend you read it in its entirety. (See link above)

A Statement of Intent

To many today, alas, Lincoln’s speech will only confirm the all-too-popular notion that he was fatally flawed on the issue of slavery. But, looked at in light of his record before[1] and subsequently, I see a clear statement of intent to eliminate that scourge.

For at the core of Lincoln’s message is the uncompromising assertion that “slavery is wrong,” and his statement of faith that that moral principle will eventually gain the power to assert itself.  That is what it means to say that “right makes might.” And through the ordeal of the Civil War, under Lincoln’s leadership and restoration of the American System of economics, the Union finally gained the power to eliminate the wrong of slavery, and move, tragically slowly, toward establishing a society based on principles of “liberty and justice for all.”

I see a clear continuity of Lincoln’s message in the Cooper Union speech from his 1858 Senatorial debates with Stephen Douglas. Back in the 1990s, I read through the entire transcript of those extensive debates, and wrote an article which I unfortunately cannot find.  What I remember distinctly, however, is my conclusion that the common thread woven through those debates was his insistence on one simple moral truth: slavery is wrong and is not upheld in the Constitution of the United States. 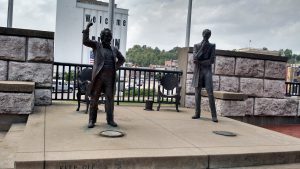 Statues of the Lincoln-Douglas debate in Alton, Illinois. (Nancy Spannaus)

Lincoln countered Douglas’s explicit assertion that the Declaration of Independence only referred to white men, when it asserted that “all men are created equal, endowed by their Creator with certain unalienable rights.” Of course, that equality was denied to most blacks, women, Native Americans, and others, and is still criminally denied to countless numbers today.  But Lincoln insisted that the moral principle was established.  It set the standard, and it only required the adherents of that principle to gain the “might” to ensure that it was enforced.

How do we gain the “might” to enforce what is “right”? First, as Lincoln says, we must cling to principle. Second, we must bring our political economy into coherence with that principle of the equality of man, implementing policies that spur and support constant technological and economic progress, expanding knowledge, improving living standards, and the uplifting of all our citizens.  Such policies, which Lincoln’s administration pursued aggressively, will bring us the power to have “right make might.”

During the last several years, I have been privileged to attend a special celebration at the Lincoln Memorial which is held on his birthday every February 12. Under the aegis of the Military Order of the Loyal Legion of the United States, the National Park Service, and host of patriotic organizations, wreaths are laid in a solemn ceremony.  The highlight is the recitation of the Gettysburg address by an invited dignitary. The event closes with stirring solemnity with Taps echoing through the majestic memorial, in honor of the fallen President.

I sorely miss having that opportunity this year, due to the pandemic. 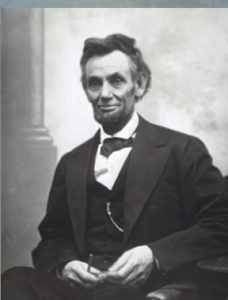 President Lincoln gave his “last full measure of devotion” in striving to create a union based on the principle that “right makes might.” In these current tumultuous times, which many fear are leading us again toward civil war, we desperately need the example of his commitment and his leadership.

It is in our power to make this a “Happy Birthday, Mr. Lincoln.”

Nancy Spannaus is the author of Hamilton Versus Wall Street: The Core Principles of the American System of Economics. The book contains a chapter entitled “Abraham Lincoln, Hamiltonian.”

[1] I recently came across an article documenting that Lincoln acted to free a slave long before he became President. See this article.