Lessons from FDR: The Hopkins Example

May 20, 2020—Almost two months ago, the U.S. Congress passed the CARES Act, which committed to spending half a trillion dollars for relief of states and municipalities. Yesterday, the two Administration officials responsible for allocating that money told the Senate Banking Committee that they were still planning out how to spend that money.

Meanwhile, cities and states around the nation are actually being compelled to lay off workers in essential services because of their extraordinary expenses in fighting the coronavirus. 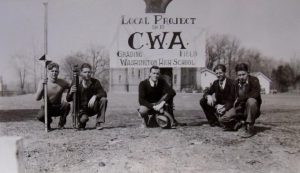 CWA workers take a break to pose for a picture.

When I read about the testimony by Fed Chairman Powell and Treasury Secretary Mnuchin yesterday, I could not help but think of the contrast between their conduct and the events of May 1933.

On May 12, 1933 Congress passed the Federal Emergency Relief Act authorizing the expenditure of half of billion dollars for relief of states and municipalities. On May 19, President Franklin Delano Roosevelt appointed Harry Hopkins to head the new agency, and on May 20, Hopkins went to work. As historian William Leuchtenburg described it in his book Franklin D. Roosevelt and the New Deal,

A half-hour after Hopkins left the White House, he placed a desk in the hallway of the RFC building. Amidst discarded packing cases, gulping down endless rounds of black coffee and chain-smoking cigarettes, he spent over five million dollars in his first two hours in office.

Hopkins, you see, understood that he was charged to take emergency action to deal with the life or death crises of the nation’s people.

Nor was this the last time Hopkins would spring into action to address a looming disaster.  The next time came in the fall of 1933, when, after having been informed of an impending brutal winter, Hopkins went to President Roosevelt to propose an emergency jobs program as a means of keeping the millions of unemployed and their families alive through the coming months.

FDR agreed, and authorized Hopkins to set up the Civil Works Administration. That agency opened its doors on Nov. 9, 1933 and within 10 days, Hopkins had employed 800,000 people. The pace would continue, ultimately resulting in a CWA workforce of more than 4.2 million people by January of 1934.

Don’t believe the lies that the CWA jobs were make-work. Between November 1933 and March 1934 (when the program was terminated), the CWA built or improved approximately 500,000 miles of roads, 40,000 schools, over 3500 playgrounds and athletic fields, and 1000 airports. The program helped keep the schools open by paying teachers, hired artists and writers, and provided the only lifeline to families across the nation.

By citing Hopkins’ bureaucracy-slashing measures, I do not mean to imply that these emergency programs represented a comprehensive solution to the Depression crisis. Neither FDR nor Hopkins thought they were either. A real solution would require bringing Wall Street’s speculators under control, establishing a national credit system, and raising the nation’s productivity through investments in high-technology infrastructure and in raising the living standards of the workforce itself. 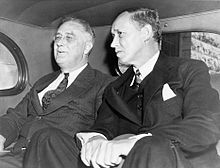 But we could use a lot more of Harry Hopkins’ roll-up-your-sleeves-and-get-to-work attitude today.