Sept. 26, 2021—While Congress continues deadlocked in a battle over inadequate infrastructure spending bills, support is growing for establishing a Hamiltonian Infrastructure Bank. A campaign by local officials determined to meet the full needs of the nation is spreading across the country. The focus of their efforts is H.R. 3339 , The National Infrastructure Bank Act of 2021, which would authorize the creation of a $5 trillion bank capitalized by current Treasury debt and devoted entirely to infrastructure.

H.R. 3339 was introduced by Democratic Rep. Danny Davis of Illinois in mid-May, and has gained two co-sponsors to date, fellow Illinois Congressmen Bobby Rush and Jesus Garcia. The bill applies the model used in past national public banks, from Alexander Hamilton’s Bank of the United States, to Franklin Roosevelt’s Reconstruction Finance Corporation, to raise the necessary funding for both the repair of crumbling infrastructure, and necessary pioneering projects in the areas of housing, high-speed rail, water, energy, and broadband. 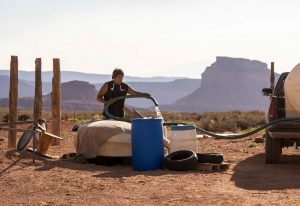 The NIB would have the funds to help deal with the Western water crisis. Indian lands in places like New Mexico are particularly hard hit, as seen here.

The following recent developments reflect the active support and determination of advocates of the NIB from coast to coast.

The first salvo in the national op-ed campaign for H.R. 3339 came way back in April, with an appeal by Rhode Island State Senator Lou DiPalma, a sponsor of a state memorial in favor of the NIB which passed both houses in the state legislature.. His op-ed was printed in the April 8 edition of the Providence Journal.

The next op-ed was published on June 21 in the Albuquerque Democrat; it was written by State Sen. Bill Tallman, the sponsor of the successful New Mexico memorial in favor of Congress passing the NIB. Tallman’s oped reviewed the devastating deficiencies of infrastructure in New Mexico and concluded:

We must make a commitment now. We are losing a race with China, Europe and other developed countries. China is not only investing trillions domestically but also building influence among small countries by providing loans and grants for infrastructure projects. The race to be the global economic leader also includes developing the technologies of the future. The NIB is the best way to restore the U.S. as a leading country by providing a more modern system of transportation, education and communication for future generations.

In September, the campaign expanded, when a group of New York state and local officials and civic leaders sent out an op-ed entitled “The Infrastructure Crisis Meets the Perfect Storm: It’s time for a national infrastructure bank.” More than a dozen leaders signed this document, which detailed some of New York State’s urgent needs, and argued that “only the National Infrastructure Bank can address this staggering need. It will create tens of millions of new jobs, pay Davis-Bacon wages and mandate Buy American policies. The NIB will supercharge the U.S. economy, and reopen American industry.”

So far, this op-ed has been published in The Journal News of the Lower Hudson Valley, and the Rochester Democrat & Chronicle. (both on Sept. 13) 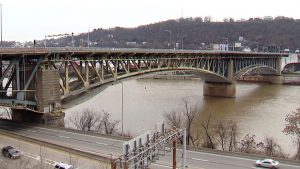 One of Pennsylvania’s many structurally deficient bridges.

Then on Sept. 24, a group of 29 current and former state lawmakers and local political leaders in Pennsylvania published an op-ed calling for a mobilization for H.R. 3339 in the Wilkes-Barre Times Leader. “People are fed up with `the same old same old!’, the op-ed read. “We urge everyone to support HR 3339 and contact your Congressional representative to enlist their sponsorship of this measure.”

The day after the Pennsylvania op-ed was published in Wilkes-Barre, the Scranton Times Tribune editorial board issued an editorial endorsing the NIB.

Meanwhile, in New York State, both the Albany County Legislature and New York State’s Association of Counties have passed resolutions in favor of HR 3339.

A fuller account of the “grass-roots” mobilization for the National Infrastructure Bank can be found at https://nibcoalition.com.