June 7, 2018– “We have a growing awareness and the evaluation, included in the [coalition] contract, that we must distinguish, that it is timely to distinguish between banks issuing credit and above all are community-linked, and the more speculation-prone investment banks,” declared newly confirmed Italian Prime Minister Giuseppe Conte in his remarks to the Chamber of Deputies June 6. The Italian government thus becomes the first in the Transatlantic region to announce the intention to reinstate the kind of bank separation which protected the banking system from disastrous collapse for 70 years.

In the United States, that bank separation was President Franklin Roosevelt’s Glass-Steagall law (a.k.a. the Banking Act ) of June 1933. The undermining of that law’s anti-speculation provisions, and its eventual repeal in 1999, are widely acknowledged by honest analysts to have played a major role in bringing on the 2008 crash. There are still active efforts in the United States (as well as elsewhere) to reinstate Glass-Steagall provisions, in the face of another threatened crash. 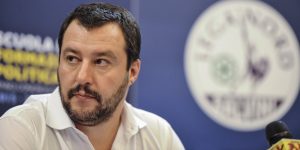 There is good reason to believe that the new Italian government, a coalition between two populist movements, the Lega and the Five-Star Movement, is serious about implementing banking separation. Many members of both parties have sponsored Glass-Steagall legislation in the Parliament in recent years, among whom are four members of the new cabinet. They are: Matteo Salvini, Interior Minister, Deputy Prime Minister, and Federal Secretary of the Lega; Gianmarco Centinaio, Agriculture Minister; Lorenzo Fontana, Family Minister; and Giancarlo Giorgetti, Secretary of the Council of Ministers.

Serious opposition to banking legislation that will eliminate state support for banks’ speculative activity with depositors’ funds can be expected, especially as the supranational European Union (EU) has imposed rules which would forbid the break-up of “universal banks.” Clashes between the EU and the new government are expected on many fronts, including the Italians’ demands for spending on infrastructure and social support beyond the crippling budget strictures demanded by the EU.

The best aid the Italian government could get in its endeavor would be for leaders in the United States to press forward the legislation now before the Senate and the House to reinstate Glass-Steagall. Rep. Marcy Kaptur’s H.R. 790 , with 58 cosponsors, and Sen. Elizabeth Warren’s S. 881 (with 8 cosponsors), would both take the necessary steps. In the face of the widely forecast coming blowout of the U.S. debt bubble, Glass-Steagall protections are more than urgent.