Is Taxing the Rich Really “un-American?”

Feb. 3, 2019–In the current climate of attacks on any proposal to raise taxes on the wealthy – labelling such proposals as “radical,” “socialist” if not communistic, a slippery slope leading inevitably to Venezuela, and so forth – it would be difficult to overstate the appalling ignorance of our history that such statements represent.

Ironically, many of these same commentators would regard the 1950s as the “golden age” of Twentieth Century America (remember “Ozzie & Harriet”), and it is probably the most likely point of reference for those who profess to want to make America great again – while conveniently forgetting that we had among the highest marginal tax rates[1] in our history during that time.  And we were better off for it.

Rep. Alexandria Ocasio-Cortez (D.-NY) recently advocated a 70 percent marginal tax rate on incomes of over $10 million.  For this she was wildly castigated as a radical who would utterly destroy the U.S. economy and civilization as we know it.

Was Adam Smith a tax-cutter?

I am reminded of a book that I had occasion to read a couple of years ago, on the “Chicago School” of economics, entitled Chicagonomics, by Lanny Ebenstein.[2]

Ebenstein is not a liberal in today’s terms – nor is he an “American System” proponent.  He is an admirer of the classical liberalism of Adam Smith, Bentham, Mill, and the like – which he sharply contrasts with the Friedmanite, anti-government “radical libertarians” that populate the Republican Party today. For precisely this reason, his view of today’s radical tax cutters is of interest.

The classical libertarians, Ebenstein argues, were egalitarians, who supported government policies and actions which would benefit the population as a whole, rather than one group or class.  He argues that even Adam Smith – portrayed today as an advocate of laissez-faire – supported many areas of government intervention, including progressive taxation, to promote the common welfare and equality.

Ebenstein contrasts Smith and Bentham’s reform agenda and their advocacy of greater equality, with today’s “conservative” praise of inequality as a social virtue:

The classical liberal economic ideal was not and is not a society divided into a very few, ultra-wealthy makers and creators and a great mass of impoverished workers and indigents, though this may rapidly be approaching the American reality for tens of millions—and, indeed, this reality is rapidly attaining the status of an ideal for many contemporary libertarian writers and thinkers. A radically unequal economic order is becoming, for perhaps the first time in American history, the implicit or even explicit goal of one of the two major political parties. To the extent that a society practices or experiences extreme inequality, however, it is ipso facto not a classical liberal one, though it may be a contemporary libertarian or contemporary conservative society—that is, contemporary libertarians and many conservatives seek inequality as among their highest practical goals.

Indeed, Ebenstein argues that “The greatest problem facing the United States today is the substantial inequality, especially on the basis of age and family structure, that increasingly characterizes American society and the economy.”  He points out that the country is increasing unequal, particularly with regard to the share of income and wealth that families with children have—or don’t have. Perhaps half of the children in the U.S. experience poverty during some part, if not much or most, of their childhood. Nearly one-fourth of children under age 18 currently live in poverty. 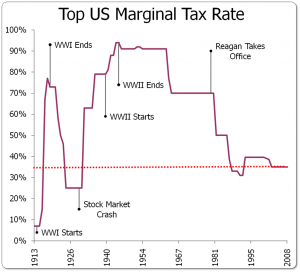 This general inequality, Ebenstein notes, is inadvertently well-portrayed by former Wall Street Journal editor Stephen Moore (now a Trump advisor) in a 2012 study for the Manhattan Institute. Moore’s data shows that in 2007, the top 1% of earners in the U.S. received 22% of income; the top 5% received 37%, and the top 10% received 48% of national income.  The top 0.1% took 10% of national income, while the bottom half of earners received about 12% of national income—very similar portions.  Accumulated wealth is even more disproportionally concentrated than is income.  Today, of course, the discrepancy is still greater.

“Amazingly,” Ebenstein points out, “Moore and other contemporary libertarians and conservatives have attempted to use the data here to demonstrate that the rich pay too much in taxes and that their taxes should be reduced!”

Free market capitalism requires substantial progressive income and estate taxation. The notion that the great classical liberals—Locke, Smith, Bentham, Mill, and the others—were fighting for a greatly unequal society is completely false. Their recommended public policies were intended to lead in exactly the opposite direction.

Ebenstein points out the obvious but generally-neglected truth, that during the 1950s, 1960s, and 1970s – when marginal personal income tax rates, and estate tax rates, were far higher than today–the United States grew faster, debt was lower, national income and wealth were more equally distributed, and families were stronger.

Of course the perennial argument for tax cuts, both corporate and individual, is that they will spur economic growth – a proposition for which no evidence exists.  But ideology is hard to kill, especially well-financed ideology, and so the “tax cuts = growth” myth keeps arising from the dead.

And there is a more insidious aspect to tax cuts.  Although the highly-touted tax cuts of recent decades haven’t spurred economic growth, they have ballooned the deficit.  This in turn – at least when Republicans aren’t in power – gives rise to calls for slashing government spending and especially so-called entitlements.  Hardly a way to generate growth!

The more fundamental problem is that we have today a bubble economy, perhaps more accurately called a casino economy.  The proceeds from tax cuts didn’t go into productive investment and job creation, as promised, but merely fed speculation. Combined with a decade of Federal Reserve “quantitative easing” – which essentially means free money for bankers and speculators – there is more money to be made in financial gambling than productive investment.  Increasing marginal tax rates, inheritance taxes, and the like, combined with the restoration of Glass-Steagall, would begin to soak up some of this non-productive liquidity.

But it’s important to remember that the 1950s and ‘60s weren’t just an era of higher taxation; this was a period when the federal government still built infrastructure and launched the science-driver space program. And the actual productivity rate dwarfed that of today.

Reducing economic inequality is a laudable goal in itself, but to be successful in the long run, it must be combined with infrastructure development and science-driver programs which put the population back to work at a higher level of technology and productivity.  Like we used to do.