Nov. 22, 2018—The coincidence of this year’s Thanksgiving holiday with the 55th anniversary of the assassination of President John F. Kennedy has provoked me to write this post.  Kennedy’s assassination was a horrific turning point in our nation’s history, the opening shot in a series of assassinations in the 1960s that all-too-successfully turned our republic away from its noble American System tradition. Yet, even in his very short tenure, Kennedy made an immeasurably positive contribution to the United States, one that can even give us hope for the future. 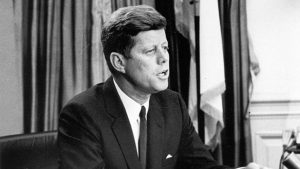 I was just about 20 years old when Kennedy was shot, and my memories of the country’s condition in the immediate period before that shock are vivid. There was no cover-up of the horrendous conditions of the ghetto, of the poverty and decay of our cities. But the young President had begun to inspire a wave of optimism, appealing to youth to dedicate themselves to public service, offering “Food for Peace” to Third World countries, and setting forth the goal of landing a man on the Moon as a step toward exploration of the vast world of space. I remember heartily agreeing with him about America’s obligation to help the underprivileged at home and abroad.

There was a lot I didn’t know about Kennedy’s American System policies at the time. As a conscious follower of the Franklin D. Roosevelt tradition, Kennedy aspired to use the power of the Federal government to put us on the path of technological progress. As my friend, historian Anton Chaitkin, reported in his 2013 article on “Kennedy vs. the Empire:”

Kennedy announced on Sept. 26, 1963, at the Hanford Nuclear station, that “by the end of this century … half of all electric energy generated in the United States will come from nuclear sources.” After 2000, virtually all new electric power installations would be nuclear.

As the use of nuclear power was being accelerated, Kennedy said at Hanford, “We must maintain an aggressive program to use our hydro resources to the fullest. Every drop of water which goes to the ocean without being used for power or used to grow, or being made available on the widest possible basis is a waste. . . .” He supported the North American Water and Power Alliance (NAWAPA) program to divert rivers from Arctic and North Pacific flow for the use of all North America.

Yet today, we are losing our precious nuclear plants, one by one, choosing instead to go backward by relying on low energy-flux-density sources of fuel like the sun and the wind.

Kennedy’s foreign policy aspirations were also in the FDR tradition. Despite intense conflicts with the Soviet Union over Cuba and Berlin, he had sought to work with that nation. Just two months before his death, on Sept. 20, he had addressed the United Nations calling for such collaboration:

I include among these possibilities [for great-power cooperation] a joint expedition to the Moon. … Why … should man’s first flight to the Moon be a matter of national competition? Why should the United States and the Soviet Union … become involved in immense duplications of research, construction, and expenditure? Surely we should explore whether the scientists and astronauts of our two countries—indeed of all the world— cannot work together in the conquest of space, sending someday in this decade to the Moon not the representatives of a single nation, but the representatives of all of our countries.

Yet today, our cooperation with Russia in space hangs like a thread, in the midst of a rev-up of confrontation which once again threatens to bring the world to the brink.

One could weep over the “path not taken,” but I would propose a different direction.  Why not revive the optimistic aspirations of Kennedy and FDR? Draw on their courage in the face of adversity to finally win the war against the enemies of scientific progress, whose headquarters are lodged in the City of London and Wall Street? Why not teach the real history of how our nation was built into an industrial powerhouse, and how that can be done again?

I have dedicated this blog to providing just such a history. The Chaitkin article I referenced above can be found in the profile of JFK, and it is well worth your study. The real history of how FDR revived the economy from the Depression is presented in depth in the series on the economic mobilization of World War II, and other pieces as well.

On this Thanksgiving Day, as we give thanks for the life and contributions of John F. Kennedy, we should rededicate ourselves to the American System mission which this nation so desperately needs.