In Memoriam for Congressman Walter B. Jones

Feb. 13, 2019–The U.S. Congress lost one of its most honorable members on February 10, when Congressman Walter B. Jones, who represented Eastern North Carolina in Congress for 34 years, died in Greenville. While elected as a Republican, Jones was well-known as an independent voice, who was not hesitant to challenge his party leadership on matters of principle. He was 76.

I had the privilege of watching Rep. Jones in action on a number of critical issues for the nation, ranging from the policy of “endless wars” to the need for reining in Wall Street with the reinstatement of Glass-Steagall banking regulations. Jones persistently tried to bring his colleagues along on these issues. 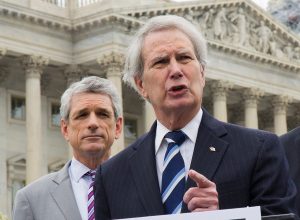 Congressman Jones at a press event in 2015

One of his more pithy, humorous efforts which has stuck in my mind was one “dear Colleague letter” he issued in hopes of getting support for Rep. Marcy Kaptur’s Return to Prudent Banking Act (which would reinstate Glass-Steagall). Rather than hit his fellow-Congressmen with a list of facts, he issued a postcard which featured pictures of the policy alternatives: on one side, a scene of the gambling center of Las Vegas, and on the other, a scene from “It’s a Wonderful Life.” Simple, but profoundly true.

The following reminiscence from my friend Stuart Rosenblatt gives a more close-up appreciation of Rep. Jones.

“Walter Jones was a friend, and collaborator …  He represented the best of what Congress should be, a man of integrity and passion. He did not suffer fools lightly, and he put his support and vote where his mouth was. After being hornswoggled by the likes of Dick Cheney and George W. Bush around the Iraq and Afghanistan wars, he became a fierce and tireless opponent of those conflicts. He also was a leader of the effort to restore the right to declare war to the Congress, as the Founding Fathers intended.

“In 2017, Representative Jones, in collaboration with other members, orchestrated the effort to bring the anti-war movie War Machine to Congress. This powerful event was merely one of the “outside the box” operations run by Rep. Jones to move the Congress to end the unnecessary and bloody conflicts in which the United States is illegally engaged.

“One of his greatest accomplishments was the successful effort, against all odds, to force the Obama Administration to release the long-classified chapter of the Joint Senate/House Select Committee on Intelligence Report on 9/11. This 28-page segment was the first concrete link to the nefarious role played by the government of Saudi Arabia in orchestrating and executing the heinous attacks of 9/11. Walter Jones spearheaded that effort in Congress, working with former Senator Bob Graham, who had overseen the original investigation into 9/11, and with the families of the victims of 9/11.

“Jones also played a leading role in the campaign to implement the Glass-Steagall Act. Never one to do things in a half…….way, Rep. Jones testified in committees, sponsored press conferences with Rep. Marcy Kaptur, and participated in countless seminars and other events. Congress rewarded his efforts to restore Glass-Steagall by removing him from the House Financial Services Committee (!), where he regularly spoke out against Wall Street…..for the record.

“He said that the two votes he sorely regretted were the votes to authorize the Iraq War and the repeal of Glass-Steagall. Much of his time in Congress was spent laboring to reverse those actions.

“There are more stories, anecdotes, and shared glasses of Chardonnay. Walter was a one of a kind. The best way to honor him is to emulate him in words and deeds.”