How to Celebrate Labor Today

Sept. 6, 2020—In many respects there is little to celebrate on this Labor Day 2020. Tens of millions of American workers are unemployed; millions more have dropped out of the labor force; organized labor’s role is in steep decline; manufacturing employment has dropped to dangerously low levels; and there would appear to be little relief on the horizon.

Yet, celebrate we must. For it must be the commitment of all Americans to restore to the laboring men and women of this country, the honor and dignity which they deserve, and which has always been the hallmark of the American System of Economics. But we must go beyond mere words. 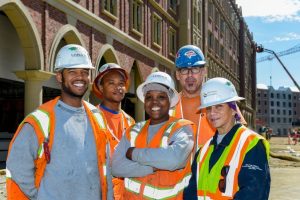 A group of workers in Southern California.

The prime concern for labor today should be clear: Jobs. And not just any jobs. What we need are jobs that contribute directly to rebuilding and upgrading our nation’s productivity and infrastructure; jobs that pay a living wage on which one can raise a family; jobs that create a real future for our country.

While most of Congress, the Fed, and the Administration have chosen to abdicate on this matter, preferring to throw money at our problems instead (the lion’s share of which has gone to the fat cats on Wall Street), there fortunately is legislation in Congress which would jump-start us toward a solution. I refer to H.R. 6422, the bill for a National Infrastructure Bank.

To get a good idea of exactly what H.R. 6422 would do for the working man and woman, and the country, you can watch the webinar sponsored by the Coalition for a National Infrastructure Bank, which aired initially at the Democratic National Convention, but, as a non-partisan effort, is now available for the widest possible audience. You can hear the impassioned statements of labor representatives who are fighting tooth and nail for this legislation across the country.  You can learn how this Bank can create 25 million union-level jobs in a crash campaign to rebuild our infrastructure.

H.R. 6422 reflects the concepts of American System advocates Alexander Hamilton, John Quincy Adams, Abraham Lincoln, and Franklin Delano Roosevelt, all of whom used the power of Federal credit to launch our nation’s most productive periods. You can find a great deal about what they did on this blog. And there is no question but that we desperately need to follow their lead today.

So, celebrate Labor Day by becoming acquainted with the ideas and legislation which can bring productive labor – manufacturing, construction, agriculture, and more – back to the center of life in our nation. Give labor and our nation the prosperous future they deserve.