How Can the Housing Crisis Be Solved?

April 6, 2022—A Zoom Town Hall meeting sponsored by the National Infrastructure Bank (NIB) Coalition on March 31 made it clear: From coast to coast, Americans are suffering from an intolerable lack of affordable housing. The meeting heard presentations from legislators and activists from 10 states, all of whom detailed the crises in their areas and their determination to solve it through implementing H.R. 3339, the National Infrastructure Bank bill advocated by the Coalition.[1]

Addressing the group on behalf of the Coalition were moderator Julie Olsen of Alaska, chair of the Alaska Democratic Party Progressive Caucus, and Alphecca Muttardy, the chief economist for the Coalition. Olsen reported that the group’s organizing efforts have succeeded in bringing the number of cosponsors of H.R. 3339 up to five. Lead sponsor Rep. Danny Davis (D-IL) has now been joined by Reps. Bobby Rush (D-IL), Jesus Garcia (D-IL), Mondaire Jones (D-NY), Thomas Suozzi (D-NY), and Dwight Evans (D-PA).

The Outlines of a Solution

The responsibility of the Federal government for ensuring habitable accommodations for all American citizens has long been a tenet of the American System of economics. Alexander Hamilton, who pioneered that system, wrote in his Report on Manufactures:

“Not only the wealth; but the independence and security of a Country, appear to be materially connected with the prosperity of manufactures. Every nation, with a view to those great objects, ought to endeavour to possess within itself all the essentials of national supply. These comprise the means of Subsistence, habitation, clothing, and defence.” (emphasis in original; boldface added)

Thus, when the housing crisis became acute in the 1930s, due to mass evictions, the Franklin Roosevelt administration stepped in with Federal programs to keep people in their homes, as well as various programs to construct affordable housing for the poor. The leading source of funds for those programs was FDR’s version of a national bank, the Reconstruction Finance Corporation (RFC). The NIB Coalition emphasizes that its National Infrastructure Bank follows in the tradition of successful banks such as the First and Second National Banks of the United States and the RFC.

To emphasize the FDR precedent, the Town Hall meeting began with a clip from FDR’s 1941 State of the Union, in which he outlined the Four Freedoms, including “freedom from want.” 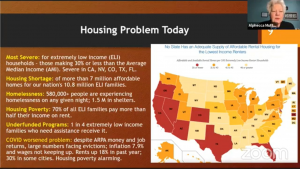 In her opening presentation, Alphecca Muttardy showed how the NIB could play a role like that of the RFC today, both by providing low-interest loans for constructing more than 7 million affordable housing units, and by creating on the order of 25 million well-paying jobs through its infrastructure projects. Such a huge construction program will in itself tend to drive down prices in the current housing market, where supplies of livable homes and apartments are totally inadequate and becoming smaller in many areas due to speculative buyers taking homes off the market.

The additional measures required to tamp down the rampant speculation driving up land prices were not addressed in this discussion.

Among the more striking reports from the various localities represented were two from Florida, specifically the cities of Tampa and Gainesville. State Representative Dianne Hart of Florida said that her area is seeing the homeless population increasing by 1000 people per month, due to the huge leaps in rents. In many areas rents are increasing at a rate of 35% to 40% per year.  People are desperate, and yet the Governor refuses to declare a state of emergency. The solution has to come from the Federal level, she concluded.

County Commissioner Mary Alford from Gainesville later seconded her evaluation. In that college town, 100 families are losing their homes every week, she said, as many rents are being doubled. Her locality is having to resort to putting people in hotels in order to put a roof over their heads.

South Carolina Representative Pat Henegan chimed in to report that her state faces a similar crisis.

What About Public Housing?

The first speaker after Muttardy’s overview on the NIB plans for addressing the crisis was Senator Robert Hasegawa of Washington State, who has successfully shepherded a Memorial resolution in favor of the NIB through the state Senate. The homeless crisis in Seattle and Spokane has been national news and continues to be severe. Sen. Hasegawa raised the issue of the need for public housing, but added that this term has such a strong stigma against it that he chooses to call it social housing.

Other participants agreed that a push for public housing evoked negative reactions. Numerous ideas for how such units could be sited and integrated into various communities were discussed as alternatives to the huge high rises that turned into slum-like ghettos for the poor, and gave public housing such a bad name.

In fact, FDR himself did not prioritize building public housing units, but, under pressure from Congressmen such as New York’s Senator Robert Wagner, the Housing Act of 1937 was passed. That bill allowed Federal subsidies to local housing authorities to establish low-income housing, primarily in the cities. The Public Works Administration was involved in building some of these projects, which were lifesavers for hundreds of thousands.

No Area Is Immune

As each representative spoke, it became clear that no area of the United States is immune from the housing crisis. Rep. Catherine Ingram of Cincinnati, Ohio noted that there is in fact a shortage of housing at all income levels.

Alderman Michael Rodriguez of Chicago gave an upbeat report on the attempt to mitigate the crisis there with a pilot project on accessory dwelling unit construction.  Accessary dwelling units are small homes located on the lot of a primary dwelling, and often recommended for the elderly.

Rep. Eddie Pashinski of Pennsylvania noted that it is not only the big cities like Philadelphia who are experiencing a lack of affordable housing. Cities like Scranton and Wilkes-Barre are setting up major distribution facilities which are bringing population to the area, where people face a severe shortage of places to live. 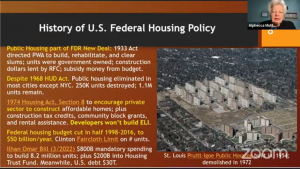 Rayellen Smith, head of the Democratic Party in New Mexico, reported on the results of a recent study that concluded that a $16/hour wage was needed for a family to afford a two-bedroom apartment in her state. Yet the average wage in New Mexico is less than $13/hour. She looks forward to the higher wages offered in the NIB legislation.

The view from Alaska, presented near the end by Harriet Drummond of Anchorage, gave the group a graphic picture of the unique housing problems in that state. There are 150 communities in Alaska that can only be accessed by air or water, she reported.  Where can one get building materials, or supplies for maintenance? How can livable homes be provided for the large families of Pacific Islanders and Southeast Asians who live in these isolated areas?

Amidst the sharing of news on the crisis, however, what came through is the fervent commitment of these state representatives to press forward with the NIB legislation. Many had sponsored successful Memorials to Congress in their states (Washington, New Jersey, and Delaware), while others were still in the process (Pennsylvania, New Mexico, and Ohio). The Democratic Party representatives had passed resolutions in their groups, and were moving on to aggressively lobby their elected representatives.

The spirit of fight was expressed most enthusiastically by Rep. Pashinski of Pennsylvania.  The NIB is the only sure way to solve this crisis, he said. We have been unable to get the bipartisan support we need here in Pennsylvania, but we are going to keep at it because the mission must be accomplished.

[1]     The Coalition for the National Infrastructure Bank (NIB) consists of like-minded political leaders dedicated to enacting HR 3339 to create a $5 Trillion Bank to fund US infrastructure. More information and a recording of the event can be found at nibcoalition.com.