July 11, 2020—The traditional ceremonies in New York City honoring Alexander Hamilton on the date of his murder by Aaron Burr on July 11, 1804 have necessarily been cancelled this year. We must honor him instead in other ways, including this post. 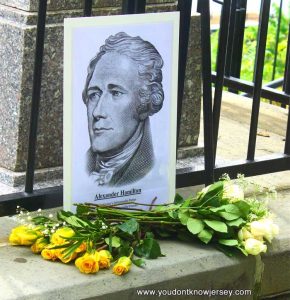 Hamilton grave site at Trinity Church, in the Wall Street area of Manhattan.

The moving portrayal of Hamilton’s death in Lin-Manuel Miranda’s play Hamilton, now broadly available on the Disney TV channel, may well cause many more Americans than usual to take note of this momentous event. I hope that is the case. It is long past time that Hamilton’s assassination be understood as the national tragedy it was.

Alexander Hamilton was shot to death in a duel at Weehawken, New Jersey by the sitting vice-president of the United States, Aaron Burr. Burr had challenged Hamilton to retract attacks on his character that had been reported by a third party. Hamilton had declined unless Burr were more specific in the statement at issue. When mediation failed, Hamilton, despite his professions of opposition to dueling, agreed to go ahead with the encounter.

Most scholars credit Hamilton’s written statements that he intended to, and did, throw away his shot, rather than aim to kill Burr. (Chernow reports Burr himself later admitted it.) Burr clearly had no such compunction. 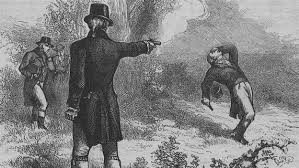 Which brings us to the question of Aaron Burr. Just who was this man, and why would he have pursued Hamilton in this way?

While this question could be answered at length, I think that Miranda’s brilliant portrayal of Burr’s character in his play is a very productive place to start. Having just watched the Disney production a couple nights ago, for the first time, I have Miranda’s presentation fresh in my mind.

Miranda takes dramatic license in framing his play around the personal conflict between Hamilton and Burr, going so far as to introduce Burr complaining about his future adversary before the play’s namesake even appears on the continent or on stage. The playwright punctuates his presentation of Hamilton’s life with real or imagined interchanges between Hamilton and Burr, drawing a vivid contrast between the two men’s approaches to politics and life. I took issue with the idea of framing their conflict in such personal terms in my review of the play’s libretto back in 2017, but I have to admit that Miranda’s portrayal of Burr is a powerful one with a lot of truth.

Like most of the characters in Miranda’s play, Burr has a mantra which he repeats over and over again to Hamilton: Don’t talk too much; hide what you think and feel; wait for the opportunity to get ahead. This attitude by Burr goes so far as to having him decline to get involved too early in the Revolution, or to commit himself to promoting the Constitution. Burr is presented as the totally unprincipled character that Hamilton accused him of being, simply angling to get ahead in whatever way he can. 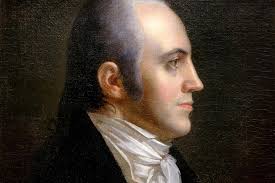 Burr is presented as extremely jealous of Hamilton, who has Washington’s ear, and has the power to make decisions (“the room where it happened”). His role in the character assassination of Hamilton (by publicizing the slurs that led to Hamilton admitting his affair with Maria Reynolds) is strongly implied in Miranda’s play. Hamilton’s role in keeping Burr out of the presidency is also emphasized, giving the viewer the strong idea of a motive for Burr’s rage against his implicit nemesis.

The contrast is clear: the passionate Hamilton, fighting to preserve the Constitution, his financial system, and the nation, versus the ambitious playboy Burr, who won’t fight for anything but himself.

But why should we honor Alexander Hamilton today? Having written extensively on this subject, including the book Hamilton Versus Wall Street: The Core Principles of the American System of Economics, I will simply encapsulate the reasons in two broad statements here.

First, he provided the ideas in political economy which brought us together as a Union that would go on to achieve unprecedented progress, and bring those ideas to the world. As Miranda so brilliantly encapsulates through the soliloquys of King George III in the play, there was good reason to believe that the colonies’ victory in the Revolutionary War would soon dissipate. The 13 mini-states were far from unified, and under the post-war pressure of British economic warfare, British instigation of the Native American attacks, and the devastation caused by the war itself, they were soon at each others’ throats. There was no guarantee that a powerful republic could be forged.

Forging such a nation required the economic-financial genius of Hamilton, the framework of the Constitution he devoted himself to bringing into being, and the vision set forth in Hamilton’s most seminal work, the Report on the Subject of Manufactures. Surely the man had his flaws, and his vision was not fully carried out. But Hamilton played an indispensable role in literally creating our nation. 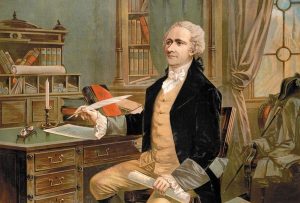 A painting of Hamilton at his desk.

It bears mentioning that Hamilton’s vision included the elimination of slavery. Miranda has received a considerable amount of flak for repeatedly citing Hamilton’s abolitionist intentions in his play. Whatever compromises Hamilton made on the slavery issue politically and personally, Miranda is absolutely truthful on this issue.

The second reason to honor Hamilton today is that the principles behind Hamilton’s political-economic policies, as developed in the American System, are crucial to bringing our nation out of the existential crisis which it currently faces.  Just as Abraham Lincoln and Franklin D. Roosevelt turned to Hamilton when forced to confront the danger that the nation would disintegrate, a national leadership committed to that same vision must emerge today.  We have no choice if we want to survive, and progress.

I’ll have more to say on Miranda’s play in the future.  For this weekend, the focus should be on honoring that brilliant, immigrant, visionary nation-builder, Alexander Hamilton.