July 25, 2018–Zack Carter’s attack on the doctrine of free trade as colonialism (HuffPost, July 22) might strike many contemporary readers as radical and over-the-top.  But if it does, this is only due to Americans’ ignorance of their own history, as pointed out in a posting on this site yesterday.

In addition to those cited yesterday as opponents of the British free trade system – Alexander Hamilton, Mathew Carey, Henry Carey, and Friedrich List – we should add Henry Clay, the “Great Compromiser” who is often regarded as one of the greatest, if not the greatest, United States Senator of all time. 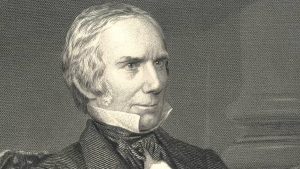 Clay was known as the foremost proponent of the “American System”  in the pre-Civil War period, for his promotion of the Hamiltonian program of national banking, internal improvements, and protective tariffs. His fight for the Union was a fight for the general welfare, as opposed to sectionalism of any kind — whether that emanating from northern radical abolitionists or southern states-rights secessionists, both of whom wanted to split the Union.

In his famous “American System” speech, delivered in the United States Senate over three days – February 2, 3 and 6, 1832, Clay systematically dismantled the arguments for “free trade” being put forward by Sen. Robert Y. Hayne of South Carolina, and others.

No Such Thing as Free Trade

In that speech, Clay contends that the seven years since the adoption of the Tariff of 1824 had been the period of greatest prosperity which the country had enjoyed since the establishment of the Constitution, freeing the economy from foreign domination.  He demolishes the myth – still peddled today – that the tariff only benefited northern manufacturers at the expense of the South, and shows that the North, South, and West all enjoyed the beneficial effects of protection.  But yet there were those who wanted to destroy this system.

When gentlemen have succeeded in their design of an immediate or gradual destruction of the American System, what is their substitute?  Free Trade! Free Trade!  The call for free trade, is as unavailing as the cry of a spoiled child, in its nurse’s arms, for the moon or the stars that glitter in the firmament of heaven.  It never has existed; it never will exist.

Trade implies at least two parties. To be free, it should be fair, equal, and reciprocal. But if we throw our ports wide open to the admission of foreign productions, free of all duty, what ports, of any other foreign nation, shall we find open to the admission of our surplus produce?  We may break down all barriers to free trade on our part, but the work will not be complete until foreign powers have removed theirs.  There would be freedom on one side, and restrictions, prohibitions, and exclusions, on the other….

Gentlemen deceive themselves. It is not free trade that they are recommending to our aceptance.  It is, in effect, the British colonial system that we are invited to adopt; and,  if their policy prevail, it will lead substantially to the recolonization of these states, under the commercial domination of Great Britain.

Clay then asks:  “And whom do we find some of the principal supporters, out of Congress, of this foreign system?”  He points out that “there are some foreigners who always remain exotics, and never become naturalized in our country; while happily, there are many others who readily attach themselves to our principles and our institutions.” 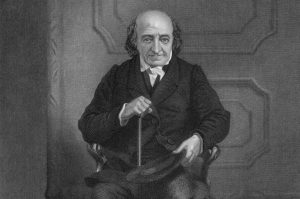 Clay points to the Germans, the French, and the Irish, who have adapted to the United States, and contributed immensely to its prosperity and well-being.

“But, sir, the gentleman to whom I have about to allude, although long a resident of this country, has no feelings, no attachments, no sympathies, no principles, in common with our people.”  (Clay is here referring to Albert Gallatin, a former U.S. Senator and Treasury Secretary who in 1832 drafted the Memorial to Congress from the September 1831 Free Trade Convention in Philadelphia.)  “He has filled, at home and abroad, some of the highest offices under this government, and he is still at heart an alien.”

“The authority of his name has been invoked, and the labors of his pen, in the form of a memorial to Congress, to overthrow the American System, and to substitute the foreign.

“Go home to your native Europe,” he challenges Gallatin, “and there inculcate upon her sovereigns your Utopian doctrines of free trade, and when you have prevailed upon them to unseal their ports, and freely admit the produce of Pennsylvania, and other states, come back, and we shall be prepared to become converts, and to adopt your faith.”

An Attack on Manufactures

Later, after discussing a British parliamentarian who frankly acknowledged that the purpose of the British free-trade system was to prevent its trading partners from becoming manufacturing nations, Clay comes back to this theme:

But I have said that the system nominally called “free trade,” so earnestly and eloquently recommended for our adoption, is a mere revival of the British colonial system, forced upon us by Great Britain during the existence of our colonial vassalage.

To illustrate his point, Clay then quotes from a 1750 British pamphlet, from which it can be seen “that the South Carolina policy now, is identical with the long-cherished policy of Great Britain, which remains the same as when the thirteen colonies were part of the British empire.”  In that work, the British author contends:

But we ought always to keep a watchful eye over our colonies, to restrain them from setting up any of the manufactures which are carried on in Britain; and any such attempts should be crushed in the beginning: for if they are suffered to grow up to maturity, it will be difficult to suppress them.

Clay then shows, in some detail, how the British policy was to prevent the rise of manufactures in the colonies, and to keep the colonies dependent on Britain for essential supplies and manufactured goods. But Clay soon finds himself revolted by the description of these practices.

Sir, I cannot go on with this disgusting detail. Their refuse goods; their old shopkeepers; their cast-off clothes, good enough for us!  Was there ever a scheme more artfully devised, by which the energies and faculties of one people should be kept down and rendered subservient to the pride, and the pomp, and the power of another! 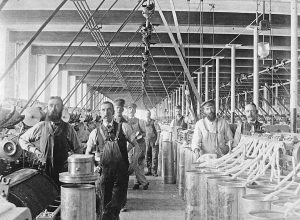 A mill in Manchester, New Hampshire in the 1830s–a target of British “free trade.”

The system that existed during the colonial period, differed in only one particular, from that being advocated by the free-traders of the 1830s, says Clay:  in the colonial period the British system was enforced by power; now it is to be carried out by the force of circumstances.

We should note that, in recent decades, the shoe has been on the other foot: the United States has joined Great Britain in using the International Monetary Fund and other institutions, to enforce the “Washington Consensus:” that developing countries must tighten their belts, and enforce austerity, while foregoing investments in infrastructure, and promotion of agro-industrial development, which could bring them beyond being mere exporters of raw materials and importers of manufactured goods.

The alternative is the adoption of American System principles by all sovereign nations—leading to an international system of cooperation between nations who control their own currencies and credit (national banking), have a commitment to building a modern infrastructure, and protect their populations’ welfare (including by tariffs). As American System Now  has stressed before, none of these policy planks functions without the others.

The writings and speeches of Henry Clay and other the  proponents of the American System should be studied and mastered by anyone who regards himself or herself as an American patriot today.