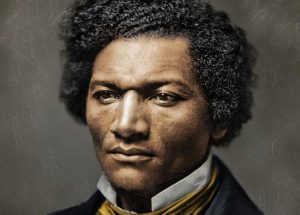 Frederick Douglass as a young man

Celebrations of Douglass’s birth and the history of African-American contributions to human progress were initially confined to the Black community, as one would expect. But due to the efforts of noted historian Carter Woodson, and many others, a movement grew to commemorate African-American history in the United States more broadly.  Thus in 1976, the 200th anniversary of the Declaration of Independence. President Gerald Ford designated February “Black History Month” and called on all Americans to “seize the opportunity to honor the too-often neglected accomplishments of Black Americans in every area of endeavor throughout our history.”

Did you ever wonder why February? Because February is the birth-month of both President Abraham Lincoln and Frederick Douglass.

It was that fact that led Carter Woodson’s Association for the Study of Negro Life and History (ASNLH) to choose the second week of February as national Negro History week. The establishment of a month dedicated to Black history simply followed that example.

Many have legitimately complained that Black history, like any other historical study, should not be confined to one month of the year.  Yet one can only applaud if the designation of this month leads to deeper appreciations of the contributions of African-Americans to our history and culture.  Of particular importance is the story of Frederick Douglass.

Douglass, Lincoln, and the Constitution

Since I am committed to releasing this post today, on Douglass’s birthday, there is no time or space here for me to review Douglass’s life and accomplishments.  I can only refer you to his autobiographies and to my previous, widely read post on the great man’s thoughts on education. (See Frederick Douglass: “Knowledge Unfits a Man to be a Slave.” )

Yet, in today’s political climate, it is appropriate to point to one significant aspect of Douglass’s thought, the one which convinced him to collaborate with Abraham Lincoln in fighting a Civil War that would abolish slavery. What brought them together was a firm belief in, and dedication to, the mission put forward in the Constitution of the United States. 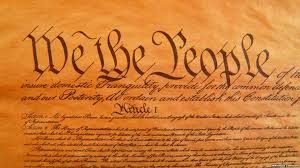 Douglass’s early abolitionist career, undertaken after he escaped from bondage at the age of 20, was closely intertwined with the campaign of William Lloyd Garrison. Garrison began his anti-slavery crusade with the establishment of the newspaper The Liberator in 1831, followed by the establishment of the American Anti-Slavery Society in 1833.  Garrison’s outlook became more and more radical, ultimately labelling the Constitution a pact with evil, and calling on slavery opponents to eschew politics and even secede from the Union.

Garrison took Douglass under his wing, and sponsored his career as a public speaker, both in the United States and later in the British Isles. Douglass’s trip to Britain and Ireland in the 1840s was a life-changing trip for him, capped by his receiving the funds to buy his freedom and to start up an enterprise of his own.

Upon returning to the United States in 1847, Douglass decided to establish his own newspaper in Rochester, New York. Called The North Star in order to evoke the enslaveds’ flight north to freedom, Douglass’s paper took up political and cultural issues, as well as the plight of the slave, under the motto “Right is of no Sex—Truth is of no Color—God is the Father of us all, and all we are Brethren.”

On May 23,1851, Douglass announced a break with Garrison’s movement in a North Star item entitled “Change of Opinion Announced.” In that article he asserted

the firm conviction that the Constitution; construed in the light of well established rules of legal interpretation, might be made consistent with its details with the noble purposes avowed in its preamble; and that hereafter we should insist upon the application of such rules to that instrument, and demand that it be wielded in behalf of emancipation.

From that statement on, Douglass began to work politically toward emancipation. Needless to say, he continued to be acerbically critical of temporizing on the cause, including by the Republican Party and President Lincoln himself.  However, as his speeches elaborate, Douglass understood that Lincoln’s need to bring the white population along with him in his movement toward emancipation, represented an understandable constraint.  Douglass pushed Lincoln, while he organized tirelessly to recruit black soldiers into the Union Army and win the war (and the peace).

For Douglass knew that Lincoln venerated the Constitution as a safeguard of the nation’s liberties, and the basis for maintaining the Union.

Did Douglass maintain his commitment to the Constitution, even after the horrors of the repeal of Reconstruction? The following quote from his speech at the Chicago World’s Fair in 1893 gives a resounding yes:

Great civil rights leaders who followed the Civil War, most notably Dr. Martin Luther King, have taken up the Douglass-Lincoln approach, insisting that the founding documents of the United States represent a “promissory note” to be delivered to all those citizens who have been denied their human and civil rights in the centuries that followed. I believe they are right to do so.

The memory of Frederick Douglass’ fight serves as an inspiration in that battle.