May 16, 2018—The Treasury Historical Association, a 45-year old private institution dedicated to education and restoration, featured a presentation by Hamilton scholar Michael E. Newton at the Treasury Building today. Newton lectured on “Alexander Hamilton: Merchant in the West Indies,” presenting a wealth of detail about the young Hamilton’s approximately six years of experience working for the merchant firm of Beekman and Cruger on the island of St. Croix.

According to one of his sons, the future founder of the American System of Economics considered his experience at the company the “most useful part of his education.” 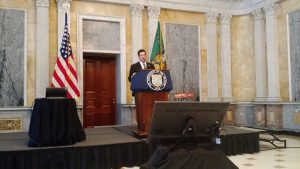 Michael E. Newton speaking in the Cash Room of the U.S. Treasury Department.

Newton began with his own recent discovery of the earliest known document to include Alexander Hamilton’s signature, a letter of appraisal dated April 22, 1767. The document indicates that the 10 year old Hamilton was already a highly trusted employee of the merchant firm.

After a summary of the nature of the Beekman & Cruger business, which involved primarily sugar and cotton, but also slaves, Newton then honed in on the five-month period during which Cruger left St. Croix for New York, and entrusted the young Hamilton with running the show. This occurred between October 1771 and March 1772, when Hamilton was 14-15 years old.

During this period, Newton documented, Hamilton had to carry out the following array of tasks: 1) inventory management; 2) people management; 3) accounting; 4) debt collection; 5) international trade; 6) maritime defense; 7) consultation with experts; and 8) tax evasion (!). When Cruger returned to the island to manage his own business, he explicitly approved of the way Hamilton had conducted company affairs. And clearly, the young Hamilton was able to utilize lessons learned from this experience in his later work on the finances of the United States.

Hamilton left for New Jersey in the fall of 1772, where he undertook formal education. Connections he had made through his work at Beekman & Cruger, including with prominent individuals in New York City, Philadelphia, and Connecticut, definitely were of use to him in his later career.

The lecture, attended by approximately 40 people, was followed by an extensive tour of the Treasury Building, which contains many historical treasures.