Hamiltonian Economics Could Have Prevented the Civil War

Part 2 of a series

March 25, 2019—The most compelling historical argument for the need to restore the Hamiltonian American System is the fact that Hamilton’s economic system could have prevented the U.S. Civil War. I develop this argument in Chapter 10 of my book Hamilton Versus Wall Street, citing numerous writings by Abraham Lincoln’s chief economic adviser Henry C. Carey.

Because I want you to read my book, I will not repeat my full argument here.  Rather, I will quote from one of Carey’s discussions of this issue, that contained in his  November 1868 Open Letter to General Ulysses S. Grant. This letter was written immediately after Grant was elected President the first time, and entitled “Shall We Have Peace?” The title referred to Grant’s expressed desire to achieve peace in all the land. 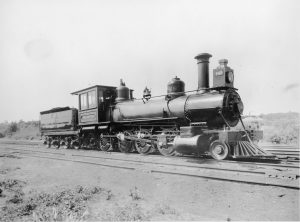 An engine from the B&O Railroad, launched during the John Quincy Adams Administration.

In this lengthy letter, Carey outlines the economic policy which Grant must follow if he wishes to achieve his goal. That policy is the one which President Lincoln had intended to carry out, to bind the nation’s wounds, had he not been assassinated. Carey develops his argument by contrasting the course of events in Germany and the United States, pointing out that, by adopting the American System, the German nation is achieving peace and prosperity, whereas the United States, by abandoning it in the 1830s, and giving free rein to sectionalism, drove itself into bloody conflict.

Had our policy been different—had we strengthened the center—there would have been such a growth of domestic commerce that roads would have been made running north and south, northeast and southwest, southeast and northwest, thereby so tying together the various parts of the Union as to render it wholly impossible that the idea of secession should continue to have existence.

What Were the Policies?

Carey concentrates on two aspects of the Hamiltonian policy which hold the nation together, a policy he explicitly calls the American System: the revenue tariff and the construction of a road/railroad system to link the regions.

When Germany began to emulate the American System, he notes, it established a customs union, which improved internal commerce and brought prosperity with the “opening of mines, building of houses and mills, and the construction of roads,” improving the productive powers of all its people. It then proceeded to build a railroad system which unified the nation even more closely. The origins of this policy was no mystery: the intellectual leadership for this German policy came from Friedrich List , who had studied Hamiltonian economics in the United States with the Careys in the late 1820s.

Yet at approximately the same time, 1833-35, the United States took just the opposite course, choosing free trade and concentrating on producing for export at the expense of the domestic market and developing productive powers. Infrastructure projects were abandoned and slavery got a new lease on life. The result, Carey writes, exhibited itself “in a great rebellion that has cost the country, North and South, half a million lives, the crippling of hundreds of thousands of men, and an expenditure of more thousands of millions that, properly  applied, would have doubled the incomes of its whole people, while making such a demand for human force, mental, moral, and physical, as would, in a brief time, have secured the establishment of universal freedom, with benefit to all, white and black, landowners and laborer.”

The turning point for the United States, you may recall, came with the Jackson Administration’s war on the Second Bank of the United States, and the abandonment of the Whig policy of a national bank, internal improvements and a protective tariff by the administrations after that of President John Quincy Adams.

“The road toward perfect peace, perfect union, perfect freedom of trade, and perfect political independence, lies through the establishment of perfect industrial independence,” Carey tells Grant. “It is the one on which we must travel if we would have peace.”

At the beginning of the war, Carey writes, Lincoln tried to get Congress to build a road from Kentucky through to the South Atlantic ports. “Had that suggestion been adopted, Kentucky would this day be a loyal State, and Tennessee would be now engaged in works of development causing such an emigration from the North as would be giving to her loyal people a power of control such as would insure the maintenance of peace,” he states. “Had it been adopted, another road would probably have been suggested, leading from the Northeast to the Southwest, the two tending to bring about between the North and the South the same intimate relations which now exist between the East and the West.”

That would have cost about $20 million, Carey says. And think of what it would have saved in money and lives. 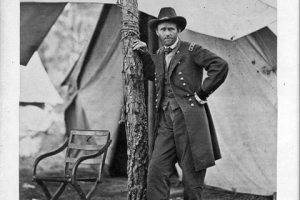 General Grant, upon election as President, wanted to secure the peace.

Carey goes on to emphasize that Grant’s priorities should be to correct this error, and spend Federal monies on “roads tending to enable the cotton of the South to reach mills and factories in the West.” Such an expenditure would “add five times that amount to the annual public revenue, while giving to the domestic commerce a development that would add countless millions to the money value of labor and land, and by promoting emigration from abroad would do more for elevation of the downtrodden people of the eastern continent than has been done by all its sovereigns from the days of Charlemagne.”

In sum, Carey argues, in order to have “permanent peace,” we need to bring the nation together through economic interdependence, and break the dependence on foreign trade. In other articles, he makes it clear that what’s needed to do that is the revenue tariff to fund infrastructure, and upgrade the productive powers of the entire nation. This would include industrializing the South, as well as providing it with domestic markets.

Lincoln’s Administration had instituted a great many policies which did tend to improve national unity after the war. These ranged from the Transcontinental Railroad, to the Land Grant College Act, and the establishment of the Agriculture Department.  All three of these policies reached into areas of the country which had lacked the investment and infrastructure needed for economic progress, and improved people’s lives. 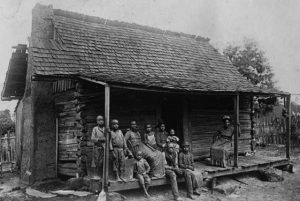 But with the increasing abandonment of American System policies in the Federal government, these policies were not sufficient to create political unity. Large swaths of the Southeast, in particular, remained mired in poverty, immiserating former slaves and keeping the majority of white farmers in penury. Those who wished for a better life all too often migrated to the cities of the North, and the economic divide between North and South, and coast and interior, was maintained, if not worsened. All too often, economic gains were accompanied by a degradation of labor, rather than an improvement in wages and living standards—and that too was a recipe for disaster.

Key to the growing disunity was the fact that Grant was convinced to abandon Lincoln’s credit policy, the greenback policy, with the Specie Resumption Act. He thus undermined his own intent to improve the conditions of the liberated slaves, by permitting the major financial houses of Wall Street (and Britain) to de facto control the nation’s financial system. A government committed to Hamiltonian policies of ever-improving powers of labor and technological growth was essential to creating the “harmony of interests” which Carey and Lincoln sought to put into effect.  With that government role curtailed, increasing conflict and periodic devastating financial crises ensued.

Today, we must not continue to make the same mistake. Hamilton’s American System policies must be restored.