Jan. 19, 2020—The online Journal of the American Revolution (JAR) prizes a reputation for challenging “myth and legend” in its daily postings of history articles. On Jan. 15, it lived up to that standard by publishing a review of Hamilton Versus Wall Street: The Core Principles of the American System of Economics, a book dedicated to combating the myths about Alexander Hamilton’s economic policies. The review by Geoff Smock, a high school teacher who has studied Hamilton over his lifetime and is a regular writer for the JAR, raises some of the crucial issues to be debated on Hamilton’s economic thought.

In sum, Smock applauds my presentation of Hamilton’s Report on Manufactures and his overall outlook toward promoting industrialization. He writes that “her third and fourth chapters outlining the Report are required reading for anyone with the desire to understand those [Hamilton’s] views, but disinclined to read nearly ninety pages of an eighteenth century economic tract.” But he takes issue with my assertions that Hamilton rejected the core principles of the British economic system and Wall Street. Thus he concludes:

The first U.S. Treasury Secretary, Alexander Hamilton, may not be the father of Wall Street, but what Wall Street is—and what the United States of America is—is a natural product of the Hamiltonian economic system. Spannaus excels in explaining that system, but, in her attempt to dispel radical misimpressions of Hamilton, errs in avowing ones of her own.

In the rest of this post, I offer a brief rebuttal of Smock’s two major areas of critique: Hamilton’s view of the British, and how Wall Street fits into his economic system. For the deeper principles behind the clash between Hamilton’s American System, and the British System that dominates Wall Street, I refer you to the book itself.[1]

While he concedes that Hamilton was not seeking to establish a “clone” of the Bank of England, and enthusiastically joined the Revolution against the British, Smock believes that Hamilton’s real views made him “an admirer of the British economic system.” He attempts to buttress this view by citing Hamilton’s approval of using the “self-interest” of the monied class to fuel his financial system. 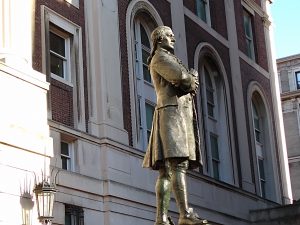 The Hamilton statue at Columbia University

That Hamilton made it clear that it was in the self-interest of the wealthy to support his system, especially investment in the Bank of the United States, is undeniable.  However, in Hamilton’s mind, there was an overarching goal to that system: the public good of the nation.  That public good was not to come about automatically by all these private money men pursuing their own interests; it was to be shaped by an energetic government with very concrete goals in mind, as reflected in the final section of the Report on Manufactures.

One of the strongest proofs of my assertion is Hamilton’s confrontation with Adam Smith, which we also find in the Report.  Smith insisted that the United States hew to its “self-interest” by letting England do the manufacturing, and simply continue to make its profits by supplying the mother country with raw materials. In the short term, that may have appeared to be the right course, and it seemed so even to many Federalists in New England, who were making plenty of money with the carry trade.  But Hamilton saw that the result of such a policy would be to “expose them to a state of impoverishment.” [Report on Manufactures]

Of course, in his early writings (i.e., the Farmer Refuted) Hamilton was even stronger, comparing the fate of the colonies if they stayed under the British System, to that of slaves.

Smock also seeks to bolster his argument by citing one of the reports by unofficial British envoy George Beckwith about his early 1790s conversations with Hamilton, while Hamilton was Treasury Secretary.  Beckwith, who at the same time was doing his best to stir up mayhem on the U.S. frontier, claimed that Hamilton said, “I have always preferred a Connexion with you, to that of any other country. We think in English, and a similarity of prejudices, and of predilections.” 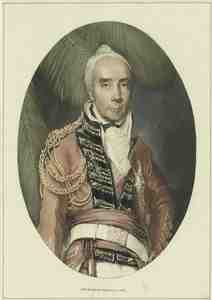 Why do I find that dubious?  Number one, it’s Beckwith’s report. Number two, whatever Hamilton said was uttered in the course of simmering tension between the two nations, since the British were refusing to make a commercial treaty with the U.S., were still occupying frontier forts, etc. Hamilton was playing the diplomat (and intelligence agent) and reporting to President Washington. Hamilton was, of course, dead set on avoiding a new war with Great Britain, which he believed would be suicidal for the young United States; he was playing a strategic card for the benefit of our nation. (Much more could be said about other economic influences on Hamilton, as I indicate in the book.)

My final comment on this aspect of my disagreement with Smock concerns his statement that “America’s economic crisis following the war was because those with wealth had no interest in upholding the republic’s credit or currency.” In fact, the desperate, and even fratricidal condition, of the nation was due to the devastation from the war, British economic warfare, and the lack of a competent central government with the powers and purpose to unite the nation.  It took men with vision like Hamilton’s (among others) to realize such a government, not on the basis of self-interest, but the greater good of the nation.

When it comes to the question of Hamilton’s relationship to Wall Street, Smock includes many qualifiers to his criticism of my argument that “Alexander Hamilton would have been the foremost opponent of Wall Street today.” Rather than defend Wall Street’s fleecing practices, he argues that its role hasn’t been all bad, and that “it has facilitated the dynamic that Hamilton described above: people of wealth depositing or investing their wealth to create more wealth for themselves, for others, and for the country at large.” He concludes by saying it “is a natural product of the Hamiltonian economic system.”

I cannot disagree with the assertion that investors in the stock market have provided capital for worthwhile investments during our nation’s history. But this is not the dynamic today; nor was it under the administrations of Hamiltonians Lincoln and FDR, for example. Wall Street bankers, led at that point by James Gallatin (son of Albert), sought to blackmail Lincoln by suspending specie payments to the federal government until a set of conditions were met.  Lincoln refused to buckle, and moved to implement his own sovereign financial policy with the greenbacks, and ultimately a national banking system.  Financial warfare against his American System policies continued throughout his administration.[2]

Hamilton on a $2 greenback

The FDR case is equally cut and dry. Wall Street had already been boycotting investment in the dying economy before FDR took office, and they continued to do so. In addition, they tried to blackmail the President through their control of credit, especially using continuation of the gold standard. FDR saw clearly that he was up against Wall Street power, and his actions to take the United States off the gold standard were explicitly intended to fight back. There has been much investigative reporting on this battle, including the 1934 attempted coup against FDR financed by Wall Street.[3] Wall Street was the enemy of the very survival of the United States.

There are other historians who argue that Hamilton was a friend of regulation of the markets in the interests of the common good. Just last week, at the Hamilton birthday celebrations in New York City sponsored by the Alexander Hamilton Awareness Society, historian Richard T. Green made that same point.[4] Indeed, as I argue in Hamilton Versus Wall Street, Wall Street bankers have most frequently followed what could be called the Aaron Burr model (the Manhattan Company), which Hamilton called “a monster of a bank.”

One of my friends with sensitivity to my blast at Wall Street has pointed out that many Wall Street bankers were exceedingly happy that FDR, that “traitor to his class,” had established regulations on the system – once things were in place, and the economy began to improve. Perhaps indeed many of the investors would want to do good under a regulated system. But the current system rewards non-productive financial speculation, which Hamilton (and Washington and others) abhorred as a crime against the nation. The results are an abomination.

In conclusion, I would like to thank the Journal of the American Revolution and Mr. Smock for this thoughtful review. I have been seeking an in-depth, broad debate on Hamilton’s economics since the book’s publication, now almost a year ago. Smock and the JAR have given prospects for that debate a very useful boost.

And so, let the debate continue.

[1] If you have the time, it is always useful to reread Henry Carey’s description of the American versus the British System in his book The Harmony of Interests: Agricultural, Manufacturing & Commercial. Excerpts can be found at www.let.rug.nl/USA/

[3] For one example, see https://www.alternet.org/2019/03/what-the-gop-learned-when-the-wealthy-tried-to-overthrow-fdr-and-install-a-fascist-dictator/  There is also a substantial account in Arthur M.. Schlesinger’s The Coming of the New Deal.