Nov. 11, 2020—In the face of a flood of media coverage of a historical interpreter claiming Alexander Hamilton was an “enslaver,”  a detailed refutation of many of the claims has been written and made public.  Philo Hamilton and Hamilton expert Michael E. Newton declare from the outset:

The claims made in that essay, entitled “`As Odious and Immoral A Thing’: Alexander Hamilton’s Hidden History as an Enslaver” and authored by Jesse Serfilippi, should be read with skepticism and examined objectively prior to drawing conclusions. Serfilippi’s essay is riddled with errors, omissions, assumptions, speculations, and misrepresentations concerning the history of Alexander Hamilton on the subject of slavery.

The authors entitle their piece “Opening a Door to Their Emancipation, Alexander Hamilton and Slavery.” The essay proceeds to document, over 28 pages, the tendentious presumptions, and even outright misstatements in Serfilippi’s research paper. These include confusing Hamilton with another man of the same name in the 1790 census records and wrongly claiming Hamilton’s support for the demand that the British return slaves emancipated in the Revolutionary War to their masters.  Indeed, Hamilton consistently called this “an odious and immoral thing,” as Serfilippi quotes in her headline. 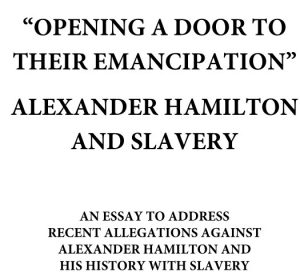 There is, of course, a considerable danger that readers will swallow the charge, now being publicized by prominent journals such as the New York Times and the London Guardian, without question.  For that reason, I insist that it is irresponsible to come to any conclusion without reading the full Philo Hamilton document.  It can be found here, and should be spread far and wide.

I enthusiastically endorse the brilliant effort of Philo Hamilton to refute what I consider to be a politically-motivated character assassination of Alexander Hamilton. Hamilton was used to such attacks, of course, and his reputation has endured scurrilous, baseless attacks before. But I think it’s important to add a broader point, directly related to Hamilton’s major contribution as a political economist.

As I argued in my spring 2019 post, “Hamilton’s Economics Aimed to End Slavery,” Hamilton’s devoted his life to creating a thriving, unified agro-industrial republic, strong enough to resist the imperialisms of his day, and vibrant enough to bring prosperity to all. He understood, and wrote, that slavery was not only immoral, but a drag on creating that prosperity.  His vision, as put forward in the Report on Manufactures, provided no room for slavery, and he fought relentlessly against the apologists for the slave system, such as Thomas Jefferson, who acted to sabotage his economic policies of a National Bank and internal improvements, in particular. 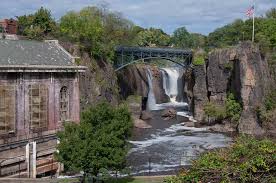 The site of Hamilton’s Society for Useful Manufactures at Passaic Falls, New Jersey

Those Hamiltonian policies, if implemented consistently, would have provided the basis for eliminating slavery early in the 19th century.  Instead, the South, enmeshed in the slave system, remained an economic backwater, relying on credit for land expansion and imports from British banks and certain Wall Street bankers allied with them. I elaborate somewhat on this point in the chapter “Hamilton’s political economy is key to saving our Constitutional Republic” in my book Hamilton Versus Wall Street: The Core Principles of the American System of Economics.

From this standpoint, the title of Philo Hamilton’s document – “Opening a Door for Their Emancipation” – is true in the broadest sense. That the realization of Hamilton’s vision was so long delayed, and required a civil war, was tragic, as would be our failure to re-adopt the principles of the American System he initiated, today.