A Government Worth Fighting For

Feb. 2, 2018–It’s headline news these days that dozens of incumbent Congressmen are retiring for what they say are the rewards of “private life.” What are we to make of this rush to the exits?
There is no question but that things are insane and dysfunctional in Washington, D.C. these days. Senators, Congressmen, and the Administration find themselves embroiled with scandals a large portion of the time, instead of the nation’s business. And when they are not, they are largely consumed either with “getting government off our backs” (Republicans) or with fighting defensive battles on wedge issues (Democrats), while ignoring the crucial policy changes that would put the United States on the path to prosperity and peace again. The environment has driven many to say that it’s too crazy for them to remain in public office, and others to seek state or local positions.

But is the current environment really unprecedented in the extent of partisan rancor, and dysfunction? Not at all. 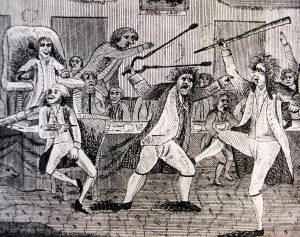 Cartoon of Congress in 1798

Take the U.S. Congress in 1798, for instance. That year saw a virtual duel on the House floor between Federalist Roger Griswold from Connecticut and Democratic-Republican Matthew Lyon from Vermont, over the issue of building up the military. Similar violence erupted during the debates on slavery in the 1840s and ‘50s, including the caning of Senator Charles Sumner of Massachusetts by Rep. Preston Brook of South Carolina in 1856, and an all-out brawl during the debate on the Kansas-Nebraska Act in 1858. And these are only symbolic of periods where Congress failed to act on the most pressing economic and social issues before the country.

What was a serious Congressman, Senator, or member of the Administration to do under these circumstances? Put his tail between his legs, and go home to be with his grandchildren? Not if he was worth his salt. Rather, with his oath of office to uphold the Constitution of the United States firmly in mind, he would insist on continuing the fight for those principles upon which the future of the nation depended.

Today, that commitment demands that Congressmen and Senators directly take on the most corrosive influence in our body politic, the dominance of Wall Street finance. It is Wall Street’s control within the branches of the legislature and the executive which has turned our government upside down: Rather than the government “of the people, by the people, for the people” acting to ensure the growth and prosperity of the nation, the financiers are calling the shots. In the name of protecting people from government overreach, Wall Street finance is reaping massive profits at national expense—putting their demands for “freedom from regulation” above the needs of the general welfare. This is why our infrastructure is collapsing, our drug problem exploding, and life expectancy declining. Congress and the Administration are refusing to honor their Constitutional commitments, and Wall Street is running the show.

If Congress were doing its job, the top items on its agenda would be: 1)the reinstatement of Glass-Steagall standards of separation between commercial and speculative banking; 2) the establishment of a national credit institution to rebuild and modernize the nation’s infrastructure; 3) the funding of major science-driver projects in science and space; and 4) a foreign policy devoted to economic collaboration with other nations, most especially including the Chinese-led New Silk Road.

But do our Congressmen, Senators, and Administration officials today even understand the role that the Federal government should be playing in our nation? And if they don’t, how can they lead the citizenry to support the policies essential to improving their welfare, and their future?

The Case of John Quincy Adams

I consider John Quincy Adams (JQA) , who served as a Senator and Congressman, as well as President and a diplomat, a prime example of what should be done in times such as these. JQA was always a thorn in the sides of his party’s leadership. While a “Federalist” Senator in the first decade of the 1800s, he broke with his party and supported the Louisiana Purchase. While a Whig in Congress in the 1830s and ‘40s, he waged a virtually one-man fight to force a debate on issues of slavery. When the Congress imposed a gag rule against any such discussion, JQA challenged that rule again and again by bringing petitions to be heard by the House. Ultimately, he succeeded in overturning the gag rule, although the Congress continued to abdicate its duty on the question of slavery, until that “issue” was resolved in the Civil War.

JQA’s often-lone fight against his party’s consensus led John F. Kennedy to make him the first example of his Profiles in Courage book. Kennedy wrote that book in 1955 because he saw the same disease of moral cowardice taking over in the institutions of the Federal government at that time. Indeed, it has only gotten worse over the ensuing decades.

Why was JQA able to stand alone, to fight for what he believed was right, when so many of his colleagues would not?

The answer lies in his understanding of the essential role of the Federal government in American society. Like Alexander Hamilton and George Washington, JQA insisted that the United States was one people, not a confederation of sovereign states. That unity existed from the time of the Declaration of Independence, he asserted, and while there were areas in which the states had appropriate exclusive sovereignty, even that depended upon the Federal government doing its job in carrying out the commitments in the Preamble, as a framework for national prosperity.

And what was the role of the Federal government? President John Quincy Adams provided a cogent description in his first Address to Congress, on Dec. 6, 1825:

… The great object of the institution of civil government is the improvement of the condition of those who are parties to the social compact, and no government, in whatever form constituted, can accomplish the lawful ends of its institution but in proportion as it improves the condition of those over whom it is established. Roads and canals, by multiplying and facilitating the communications and intercourse between distant regions and multitudes of men, are among the most important means of improvement. But moral, political, intellectual improvement are duties assigned by the Author of Our Existence to social no less than to individual man.

For the fulfillment of those duties governments are invested with power, and to the attainment of the end — the progressive improvement of the condition of the governed — the exercise of delegated powers is a duty as sacred and indispensable as the usurpation of powers not granted is criminal and odious.

Among the first, perhaps the very first, instrument for the improvement of the condition of men is knowledge, and to the acquisition of much of the knowledge adapted to the wants, the comforts, and enjoyments of human life public institutions and seminaries of learning are essential. So convinced of this was the first of my predecessors in this office, now first in the memory, as, living, he was first in the hearts, of our country- men, that once and again in his addresses to the Congresses with whom he cooperated in the public service he earnestly recommended the establishment of seminaries of learning, to prepare for all the emergencies of peace and war — a national university and a military academy. With respect to the latter, had he lived to the present day, in turning his eyes to the institution at West Point he would have enjoyed the gratification of his most earnest wishes; but in surveying the city which has been honored with his name he would have seen the spot of earth which he had destined and bequeathed to the use and benefit of his country as the site for a university still bare and barren….

One frequently hears Congressmen today talking about their obligation to their constituents and to their states. Much less frequently do we hear them address their oath to fulfill their Constitutional duty to the nation as a whole. Yet it is only in the Federal government that the parameters of economic and financial policy are set, the means for creating and funding necessary infrastructure exist, and the physical defense of the country can be secured.

Again and again it’s been shown that “devolving” the solution to the nation’s problems to the states, and the private sector alone, is a recipe for disaster. Our Constitution gives Congress not only the power, but the obligation to oversee a financial system that will serve the general welfare. From the days of George Washington himself, that meant taking action against speculation, and establishing a credit system that would facilitate investment in infrastructure, industry, commerce, and agriculture for the benefit of the entire country.

Today Congress’s obligation is to return to Glass-Steagall and establish a National Infrastructure bank utilizing public credit for the crucial projects that will dramatically upgrade our way of life. Those steps are prerequisites for dealing with the glaring problems of health care, opioid addiction, disaster relief, education, violence, and much more. It’s the Congressmen who fight for these measures now, who will save our nation from disaster—or it won’t be saved at all.