Aug. 23—Today marked the opening of the Lindau Nobel Laureates meeting on economics, a yearly event, where 18 former Nobel Laureates in economics (a rather compromised bunch, to be sure) are scheduled to meet with hundreds of young economists from around the world to discuss the current state of the world financial system and economy. Mr. Euro—ECB head Mario Draghi—keynoted the opening session, but the headlines are being grabbed by some of the Nobel Laureates who see a new global crisis looming. 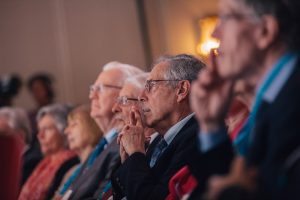 On August 21, the German daily Die Welt published a preview of the meeting, which led as follows:”The brightest minds of economics warn of the next financial crisis. Despite the reforms of the past years, there are still gaps in the supervision. It is a mistake to weigh security in the face of well-running exchanges and stable economic activity. This is the result of a WELT survey among the 18 economics Nobel Prize winners, who are discussing drastic economic problems this week in Lindau on Lake Constance .” (translated from the German)

Welt interviewed Daniel McFadden of the University of Minnesota, Eric Maskin at Harvard, and Edward Prescott of the Minneapolis Federal Reserve Bank, all of whom anticipate a crash. McFadden sees such crises as “inevitable” as a result of the systemic “financial risk,” and also pointed to the crucial factor of collapsing total factor productivity as a causal element in the crisis. Maskin sees a crisis becoming “more probable” with the tightening of interest rates. Prescott, the 2004 Nobel Prize laureate, sees a crisis coming “with great certainty […] in the not too distant future.”

The conference runs until Aug. 26, and the speeches of the participants will be posted on the website cited above. Will any of the participants address the necessary measures to avert the crisis (Glass-Steagall banking separation) and to restart the economy (Hamiltonian national banking)? That’s highly unlikely. The initiative will instead have to come from concerned citizens and government officials determined to prevent such a disaster.