April 19, 2021–In honor of the birthday, April 27, 1822, of the renowned American Civil War hero and two-term President Ulysses S. Grant, we recall the courageous actions he took as Commander-in-Chief to defend the Constitutional rights of the formerly enslaved Americans, by enforcing the newly established laws protecting their civil rights. 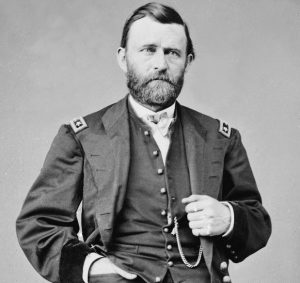 Grant is, of course, best known as the pre-eminent military commander of the Union forces in the Civil War (1861-1865). While he is justly celebrated as the savior of the Union, his status as a champion of the freedmen’s civil rights during his Presidency (1869-1877), thereby carrying forward the legacy of the murdered President Abraham Lincoln, is less known and appreciated.

The Rights of Freedmen

Both Grant and Lincoln came to hold the view that a Union victory would be dependent in significant part on the recruitment of black soldiers into the Army. Following Grant’s historic victory at Vicksburg, July 4, 1863 (one day after the Union victory at Gettysburg), Lincoln wrote to the general, urging him to expand the recruitment of freed slaves into the Union Army. Writing to Grant that the freedmen were “a resource which, if vigorously applied now, will soon close the contest. It works doubly, weakening the enemy and strengthening us.” Grant agreed. He conveyed his “hearty support” for “arming the negro” to Lincoln.[1] Under Grant’s leadership, black women too were recruited to aid in the war effort, serving as nurses, launderers, and cooks for the soldiers. Among those serving was the indomitable Harriet Tubman, leader of the Underground Railroad, Union spy, unpaid soldier, volunteer nurse, and freedom fighter.

In the immediate aftermath of the war, in which more than 600,000 Americans died, including an estimated 40,000 black soldiers (about 200,000 African American former slaves fought for the Union, out of 4 million then living in the U.S.), Congress succeeded in enacting three Constitutional amendments, the 13th, 14th, and 15th, known collectively as the Reconstruction Amendments, which established full citizenship and voting rights for Blacks.

While Grant’s campaign theme, “Let Us Have Peace,” signified his (and Lincoln’s) determination to promote sectional and racial harmony throughout the country, he was instead confronted with a resurgence of Confederate treason and armed rebellion against the very idea that the freed men and women had the same rights and liberties as all other Americans. While emancipation had freed 4 million black Southerners, the war left them landless and economically destitute. White Southerners, refusing to accept the free status of blacks, which they viewed as a threat to their own economic condition, devised oppressive state laws, known as the “Black Codes” (1865-1866) which, in all but name, were intended to revive the slave system. 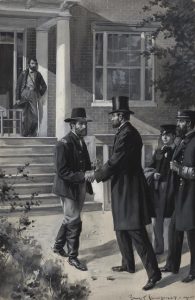 Radical Reconstruction vs. the Klan

Grant had hoped the generous terms that he and Lincoln had granted General Lee and the Confederate troops would guarantee peace in the aftermath of the war. This hope was quickly dashed when, following the passage of the Reconstruction Amendments, members of the Ku Klux Klan and other less-well-known vigilante groups began carrying out raids, terrorizing blacks and their allies who attempted to exercise their right to vote, to run for office, and to serve on juries.

In 1867, a faction of the Republican Party in Congress known as the Radical Republicans acted to prevent the leaders of the former Confederacy from returning to power after the war; they aimed to expand the influence of the Republican Party into the South, and to protect the voting rights of African Americans. The result was what came to be known as the Reconstruction Acts, or Military Reconstruction Acts (1867-1868).

These laws established the requirements for readmission of the former slave states to the Union, and their release from wartime and postwar military/federal control. Five military districts were established, each commanded by a former Union general, who would act as the governor of the region; each former state of the Confederacy was required to draft a new state constitution, to be approved by Congress, and to ratify the 14th Amendment to the Constitution. 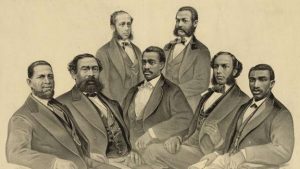 During the decade of Radical Reconstruction (1867-77), a total of 265 African American state delegates were elected, more than 100 of whom had been born into slavery. Almost half of the elected black delegates served in South Carolina and Louisiana. In all, 16 African Americans served in the U.S. Congress during Reconstruction; more than 600 more were elected to the state legislatures, and hundreds more held local offices across the South.

According to historian and Grant biographer H.W. Brands,[2] the President began to receive letters from Republicans in the South soon after he took office. One said, “I write you to know if there is a law in this free land of ours that will protect and guarantee safety against the Rebel prowlers that infest every nook and corner, better known as K.K.K.s, who are armed and ready to take the life of any one if they do not endorse treason and rebellion.”

The Republican governor of South Carolina described a terrifying situation that was beyond control: “The outrages in Spartanburg and Union Counties in this state have become so numerous, and such a reign of terror exists, that but few Republicans dare sleep in their houses at night. A number of people have been whipped and murdered.” A woman in South Carolina wrote: “Sir, we are in terror from Ku-Klux threats and outrages. There is neither law or justice in our midst. Our nearest neighbor, a prominent Republican, now lies dead, murdered by a disguised Ruffian Band, which attacked his house at midnight a few nights since. His wife also was murdered. She was buried yesterday, and a daughter is lying dangerously ill from a shot wound.”

And these were letters from prominent white citizens!

The Klan, which was founded in Tennessee in 1865 by former Confederate Army officers, began as a social club, but by 1867, it had begun to spread across the South, and, in reaction to Reconstruction, to use terrorism and murder to impose white supremacy, targeting freedmen and their allies. The Ku-Kluxers, as they were called, were virulently opposed to the idea of equal rights for blacks. Its robed and hooded members began terroristic “night rides,” murdering entire families, burning homes, black churches, and schools, etc., aimed at crushing those, black or white, who attempted to fulfill the mandates of Reconstruction. 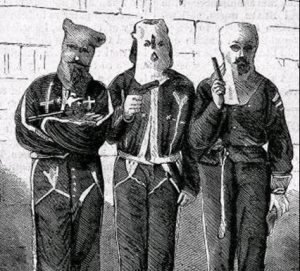 As described by the noted black historian W.E.B. DuBois in 1935,[3] “Armed guerrilla warfare killed thousands of Negroes; political riots were staged; their causes or occasions were always obscure, their results always certain: ten to one hundred times as many Negroes were killed as whites.” Masked men shot into houses and burned them, sometimes with the occupants still inside. They drove successful black farmers off their land. “Generally, it can be reported that in North and South Carolina, in 18 months ending in June 1867, there were 197 murders and 548 cases of aggravated assault.”

Historian Eric Foner wrote this about the Klan: “In effect, [it] was a military force serving the interests of the Democratic party, the planter class, and all those who desired restoration of white supremacy. It aimed to reverse the interlocking changes sweeping over the South during Reconstruction: to destroy the Republican party’s infrastructure, undermine the Reconstruction state, reestablish control of the black labor force, and restore racial subordination in every aspect of Southern life…. The Klan soon spread into nearly every Southern state, launching a reign of terror against Republican leaders both black and white.”[4]

Grant determined to act against what was clearly the threat of a new civil war. He asked Congress, in 1871, for extraordinary powers to deal with the insurgency. As historian H.W. Brands puts it: “A condition of affairs now exists in some of the States of the Union rendering life and property insecure and the carrying of the mails and the collection of the revenue dangerous,” [Grant] told Congress, adding that only the Federal government, not the states, has the power to deal with the crisis.”

As expected, the Democrats, predictably, charged that Grant was becoming a dictator; one said, “In no free government anywhere in the world has any such power been delegated by the people. Nor is there any despot for the past century who would attempt to exercise it.” The president was defended by some, but not all Republicans. Sen. John Hawley (Ill.) called the charges against Grant “ludicrous”: “Sir, why shall we say this great chieftain, who marched at the head of more than a million men, will seek for a pretext to call out the militia in one or two or more states in order to subvert the liberties of the American people, when we know there was a day when he stood at the head of an army composed of a million veteran soldiers, and yet at the behest of the civil power this great army melted away like the dew before the morning sun?”[5]

The future Republican president, James Garfield, was less sanguine: “It seems to me that this will virtually empower the President to abolish state governments.” Garfield also thought the move would ruin the Republican Party.

Yet Grant succeeded in getting what he needed: “An Act to Enforce the Provisions of the Fourteenth Amendment,” which was informally dubbed the “Ku Klux Klan Act.” The measure allowed persons deprived of their rights under the Constitution to bring suit in federal courts (rather than state courts). It outlawed conspiracy to deprive citizens of the equal protection of the laws or prevent citizens from voting, and permitted the prosecution of such conspiracies in federal courts. It also declared that when the denial of rights was so organized and egregious that it overawed state authorities, or when state authorities connived in the denial, such combinations “shall be deemed a rebellion against the government of the United States.” The president was then authorized “to suspend the privileges of the writ of habeas corpus, to the end that such rebellion may be overthrown.”[6]

Grant homed in on South Carolina—the first state to secede from the Union—and ground zero for Klan activity in the early 1870s, sending Attorney General Amos Akerman there to report on Klan atrocities. When the president issued an ultimatum, demanding that the Ku-Kluxers submit within five days, and was ignored, he escalated. In October 1871, he sent in federal marshals and troops; he suspended habeas corpus in nine counties in the state. Several hundred terrorists were rounded up; others fled the state. Klan networks were broken up. As a result, the insurrection was crushed. Racial violence declined dramatically throughout the South; the KKK virtually disappeared from Southern life, yet most whites in the former Confederacy (and it must be admitted, in the North as well) remained opposed—as many still do—to equality for African Americans. 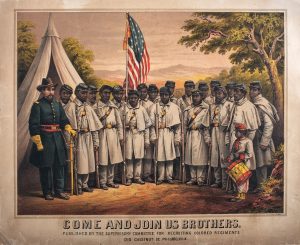 Grant’s forceful actions, imposing martial law and suspending habeas corpus against the Klan, were roundly condemned by many in both political parties, yet he never backed down. Among his defenders was the eminent abolitionist and former slave Frederick Douglass who remarked: “The law on the side of freedom is of great advantage only where there is power to make that law respected.”

When Grant died, a group of black Union veterans remembered him this way: “In General Grant’s death, the colored people of this and all other countries, and the oppressed everywhere, irrespective of complexion, have lost a preeminently true and faithful defender.”[7]

The eradication of the Klan in the 1870s, unfortunately, did not last long. Jim Crow laws, which imposed segregation of the races and severely restricted civil liberties of blacks, had begun as a reaction to the 13th Amendment, and continued well into the 20th Century, until the 1960s Civil Rights movement succeeded in overthrowing them—at least in law, if not always in practice. Even now, the poison of racism and the remnants of Jim Crow continue to deny African Americans their basic rights, as can be seen in efforts, for example in Georgia and Texas, to suppress voting rights of black and brown Americans.