March 30, 2018—Nuclear energy is a vital component of the U.S.’s  power supply–but it is now under mortal threat due to the “free market” fraud. On March 28, the electric utility company FirstEnergy took two dramatic steps. First, it sent a 44-page letter to Secretary of Energy Rick Perry calling on him to declare an emergency because “the nation’s security is jeopardized if DOE does not act now” to keep financially failing nuclear and coal plants open. Second, FirstEnergy’s nuclear subsidiary informed the Nuclear Regulatory Commission in Washington that it will close its Davis-Besse plant near Toledo, Ohio, in 2020, and its Beaver Valley plant, which has two reactors, near Pittsburgh, in 2021. 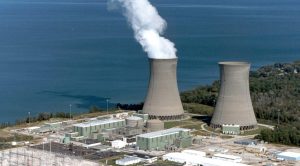 FirstEnergy, which runs ten public utilities serving 6 million customers in the Mid-Atlantic region, is seeking permission to set prices above “market value” for its nuclear plants to make them financially viable. It is not alone in facing serious financial problems.  Dozens of operating plants around the country are threatened with closure due to a “free market,” which involves heavily-subsidized, supposedly-cheap “renewables,” and temporarily cheap fracked natural gas. In Pennsylvania, Exelon’s Three Mile Island nuclear plant is also under threat. Recent closures of nuclear plants due to “financial distress” have already brought the number of plants down to 99 (from 104), and at least a dozen more plants are already slated to be shut down in the coming years for the financial reasons.

The Trump Administration is unlikely to act on the power industry’s request, despite the accuracy of FirstEnergy’s argument. The reality is that closure of the three additional reactors now slated for shutdown threatens the stability and reliability of the regional electric grid, as well as the economic well-being of local communities that depend upon the utilities’ taxes for schools and services, and the thousands of highly skilled workers who run the plants. Pennsylvania’s nine nuclear plants produce 38% of the state’s power.

Overall, nuclear energy provides almost 20% of the nation’s electric power, the second highest source after fossil fuels. This inherently most efficient energy source has proven to be the most reliable of all power sources, including in emergencies such as hurricanes, and even meets the popular clamor for “low carbon emissions.” Yet, between the anti-nuclear lobby and the coal and gas industry, this industry—not to mention its necessary successor, nuclear fusion—is being crushed.

For the past year, state legislatures in Pennsylvania and Ohio have been unwilling to take the action needed to ensure the continued operation of their nuclear power plants. State legislatures in New York and Illinois, on the other hand, have passed laws to allow utilities to charge customers a fee, to be able to keep plants operating. Minnesota just joined them to save its three nuclear plants. The possibility that states would implement changes in law to allow utilities to at least recoup their cost, has met a well-funded public campaign by its opponents.

While stop-gap state action may be necessary, there is no way around a return to a sane Federal policy on the power industry, as initiated by Franklin Roosevelt in the 1930s: regulation for affordable rates and a modest profit, and investment in the most technologically advanced sources of power production for the future, through a new national infrastructure bank.