July 30, 2018—In dealing with the issue of tariffs which the Trump Administration has put on the front burner, I have consistently argued that an American System approach to reviving American manufacturing demands a comprehensive policy of which tariffs may only be a small part. Specifically, the advocates of the American System, from Alexander Hamilton on, crafted a policy that involved national banking (credit) and investment in internal improvements (infrastructure), as well as protection for vital industries (through tariffs or, in Hamilton’s view, preferably other government support). None of these three aspects of the policy works without the others. 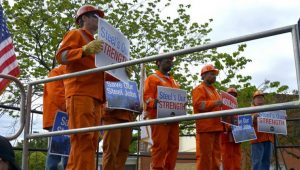 Not surprisingly, the results of the Trump Administration tariff policy so far has underscored this point.  Although there has been an increase in manufacturing jobs and some openings of steel plants, the costs inflicted on other areas of the economy, especially by the purely punitive tariffs on China, have left even the proponents of Trump’s tariffs quite unsettled, and looking for broader solutions.

The Alliance for American Manufacturing

Indicative of this dissatisfaction is a campaign which began in the Alliance for American Manufacturing (AAM) blog on July 24. The AAM’s first salvo was a blast at the Administration (and Congress) for failing to move on the previously vaunted infrastructure program—a gaping hole in the nation’s productive capability.

Then on July 25, AAM published a short video entitled “Lessons for American Manufacturing, Found in Europe.” The film began by contrasting the U.S. state of manufacturing with some “unknown” European country: the U.S. has 3% of its population in manufacturing, as opposed to 9% in that country; manufacturing makes up 12% of U.S. GDP, while it contributed 25% in that country; etc. It then reveals that this country is none other than Germany!  Further review of what Germany does leads AAM to conclude that the United States needs to follow Germany’s example in developing a national manufacturing strategy, upgrading its infrastructure, and putting public money into support for R&D and apprenticeship programs (as contrasted which major cuts proposed by the Trump Administration in such programs.)

On July 26, in its comment on Trump’s “victory lap” in Granite City, Illinois on the steel industry, the AAM kept up the barrage. Tariffs are only a small step, they argued—the erosion of the industry has not stopped. As could be expected, they call for more targeting of China—but add the correct point that an aggressive infrastructure program would go a long way to aiding steel’s revival.

On July 28, author Zachary Karabell, writing in the Washington Post’s posteverything blog, made the correct point even stronger. Karabell argued that the only way in which a tariff policy could work to rebuild the manufacturing sector in the United States is for the United States to take up the model of Franklin Delano Roosevelt, (or China!) by launching a massive infrastructure-building program.

What the U.S. needs is a “state-driven industrial policy,” Karabell argues, such as was done in the New Deal and in the World War II economic mobilization.  This is a breath of fresh air, sanity, coming from an unusual source, because he’s right! As an ongoing series on this blog has argued, the World War II mobilization, in particular, provides lessons for how to create revolutionary increases in productivity and major advances in manufacturing. The additional crucial point, of course, is that that mobilization built off the extensive infrastructure-building program of the New Deal, also funded by the Federal government. 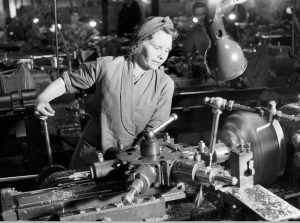 A lathe operator during the economic mobilization for World War II.

To give a flavor of Karabell’s argument:

“Turning the United States into a state-run economic powerhouse would make for debatable policy, to put it mildly, but it would at least be a coherent and compelling vision that has a chance of success, though at great economic and systemic cost. Out would be any pretense of free markets and small government — staples, until now, of GOP ideology. In would be long-term planning, trillions in domestic investment fueled by deficit spending and economic walls of high tariffs keeping the world at bay far more effectively than the physical wall that Trump so craves on the southern border.”

Karabell errs in his concept of financing.  What’s needed is not “deficit spending,” but something like the Reconstruction Finance Corporation, which functioned as a kind of national bank during the FDR era. Thus he fails to propose the kind of financing required today, and the necessary scale of the investment, which runs into the several trillions, rather than $1.5 trillion. Contrary to his assertion, such a financial mechanism, carried out along the lines of Hamilton’s Bank of the United States, would be a massive gain for the economy, not a “great economic and systemic cost.”

The good news, however, is that serious people are putting national industrial policy on the policy agenda.  Thus, they are approaching the right mindset to look at the American System solutions which this blog has explicated—including re-imposing Glass-Steagall on a rotten, bloated banking system, and establishing a National Bank for Infrastructure and Manufacturing .