Federalist No. 11: The American System

Nov. 22, 2019–“Let Americans disdain to be the instruments of European greatness! Let the thirteen States, bound together in a strict and indissoluble Union, concur in erecting one great American system superior to the control of all transatlantic force or influence and able to dictate the terms of the connection between the old and the new world!”

Those words at the conclusion of Federalist No. 11, written by Alexander Hamilton and published on Nov. 23, 1787 may come as a surprise to many. The concept of an “American System” has long been asserted to have been formulated by the Kentucky statesman Henry Clay several decades later. But here, in an essay under the title “The Utility of the Union in Respect to Commercial Relations and a Navy,” it is Hamilton who raises the standard of a unique “American System.” 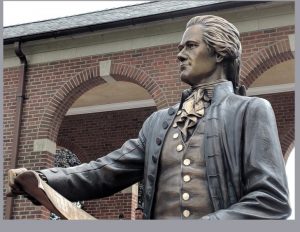 That is not to say that Hamilton elaborated on the scope and depth of the American System of Economics in that document. As I argued in my book Hamilton Versus Wall Street: The Core Principles of the American System, Hamilton’s Report on Manufactures (written four years later) represents the fullest exposition of his thinking on economic development. But in Federalist 11, when we were in the midst of a broad debate over the formation of our sovereign republic, Hamilton raised the vision of our nation becoming a powerful commercial republic, and that deserves our attention.

Let’s review what he argued.

Hamilton’s key argument was that the creation of the Constitution was essential for national prosperity, because only under a national government could the country preserve its hard-won independence in the face of the governments of Europe, all of whom had footholds on the American continent. As he summarized it, “a unity of commercial, as well as political, interests can only result from a unity of government.” 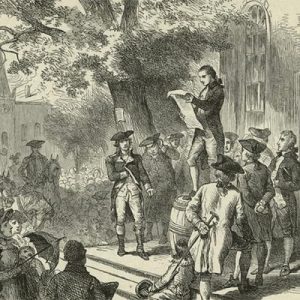 A depiction of the Constitution being read outside the NY State ratifying convention.

The “adventurous spirit, which distinguishes the commercial character of America,” Hamilton argued, has already caused apprehension among the European powers. They will therefore attempt to clip our wings, preventing us from an “ACTIVE COMMERCE” in our own ships, and seek to encourage conflict between the states. It will be in their interest to keep us weak, without a Navy to defend our trade, and at the mercy of their terms.

The alternative is available under the new Constitution, Hamilton went on to insist:

Under a vigorous national government, the natural strength and resources of the country, directed to a common interest, would baffle all the combinations of European jealousy to restrain our growth. This situation would even take away the motive to such combinations, by inducing an impracticability of success. An active commerce, an extensive navigation, and a flourishing marine would then be the offspring of moral and physical necessity. We might defy the little arts of the little politicians to control or vary the irresistible and unchangeable course of nature.

But in a state of disunion, these combinations might exist and might operate with success. It would be in the power of the maritime nations, availing themselves of our universal impotence, to prescribe the conditions of our political existence; and as they have a common interest in being our carriers, and still more in preventing our becoming theirs, they would in all probability combine to embarrass our navigation in such a manner as would in effect destroy it, and confine us to a PASSIVE COMMERCE. We should then be compelled to content ourselves with the first price of our commodities, and to see the profits of our trade snatched from us to enrich our enemies and persecutors. That unequaled spirit of enterprise, which signalizes the genius of the American merchants and navigators, and which is in itself an inexhaustible mine of national wealth, would be stifled and lost, and poverty and disgrace would overspread a country which, with wisdom, might make herself the admiration and envy of the world.

Hamilton was also at pains to argue that the commercial success he envisaged would benefit the entire nation, not just some of its geographic sections, as its opponents often charged. He concretely laid out this interdependence in the case of the Navy, outlining what the South, Middle States, and Northeast would all contribute, to their mutual benefit.

Immediately before concluding, Hamilton brings up what some may find a surprising argument for the cause of the Constitution—the need to counter European imperialism.  The section is worth quoting at some length:

The world may politically, as well as geographically, be divided into four parts, each having a distinct set of interests. Unhappily for the other three, Europe, by her arms and by her negotiations, by force and by fraud, has, in different degrees, extended her dominion over them all. Africa, Asia, and America, have successively felt her domination. The superiority she has long maintained has tempted her to plume herself as the Mistress of the World, and to consider the rest of mankind as created for her benefit. Men admired as profound philosophers have, in direct terms, attributed to her inhabitants a physical superiority, and have gravely asserted that all animals, and with them the human species, degenerate in America–that even dogs cease to bark after having breathed awhile in our atmosphere. Facts have too long supported these arrogant pretensions of the Europeans. It belongs to us to vindicate the honor of the human race, and to teach that assuming brother, moderation. Union will enable us to do it. Disunion will add another victim to his triumphs. 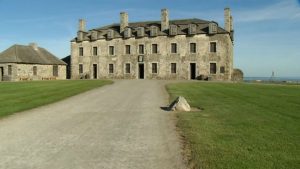 Old Fort Niagara, shown here, was one of the forts the British still occupied in 1787, when Hamilton spoke of the ongoing threat.

Hamilton declines to bring up his perspective for the United States to develop manufactures in the Federalist papers. Indeed, he declares that the country is “extremely addicted to agriculture,” and is likely to remain that way for a long time to come. Clearly he knew even then that creating a manufacturing nation would require a concerted effort to win popular support. The first step was the creation of that sovereign “vigorous national government.”

That he did, along with building the first institutions that put us on the way to becoming the industrial envy of the world.