January 6, 2021–Eighty years ago, on January 6, 1941, President Franklin D. Roosevelt summarized America’s mission in the world in his Four Freedoms speech. In subsequent declarations and world agreements, the principles of the Four Freedoms came to be recognized as international law, which civilized nations are bound to obey.

Roosevelt’s words that day are particularly haunting to us now, because the United States has abandoned those lawful principles. Yet the Four Freedoms are also inspiring. What Roosevelt said then represents the essence of America’s founding mission and purpose, which ought to guide us to safety out of the present moral and economic collapse. 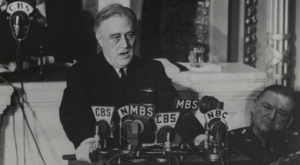 Who We Are, and Should Be

Let us contrast our recent shameful national behavior with these old principles, and then review the historical context of the Four Freedoms, with the hope that we can resume the point of view of a country that once brought great blessings to mankind.

As to Freedom of Speech: Edward Snowden is in exile, and Julian Assange remains imprisoned, for revealing the truth about aggressive war, war crimes, and mass government surveillance of the population. Citizens today do not address vital issues with reason and calmness, for fear of attack and censorship. National leaders avoid speaking about the most fundamental problems of peace and progress. 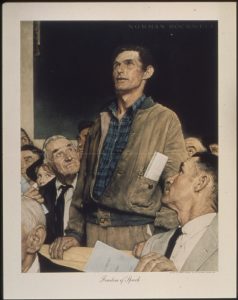 Real Freedom of Worship is based on respect and protection for the faith of others. Yet we now condone and promote unending revenge-wars between differing faith communities, forgetting the historical lessons of Europe’s evil religious wars. We lack respect for others’ faith — perhaps because we are encouraged to look with contempt upon faith in God.

Freedom from Want, a decent standard of living as the most basic human right, has two absolute requirements for its fulfillment:

Freedom from Fear, today, means cancelling the present Anglo-American policy of constant war and the threat of war. This would imply a great national inquiry into how the present insane and unlawful policy came about.

On the pretext of the 2001 terror attacks, the U.S. and Britain launched a series of overt and covert wars. One cringes at the pious chatter about the fate of refugees, without reference to the Anglo-American deployment of military forces including terror groups for regime-change, which has murdered and exiled millions of Syrians.

The Four Freedoms Are the Law

Seven months after his Four Freedoms speech, President Roosevelt obtained the reluctant signature of British Prime Minister Winston Churchill on the Atlantic Charter (August 14, 1941), proclaiming the right of all peoples to self-government – and to Freedom from Want, and from Fear.

Churchill later declared that this should only apply to nations conquered by the enemy fascists, and not to those conquered by the British Empire. Yet the Atlantic Charter moved nationalists such as Nelson Mandela in South Africa and Mohandas Gandhi in India to demand freedom from imperial enslavement.

The Charter of the United Nations, adopted June 26, 1945, was based directly on the American principles enunciated by Roosevelt – the principles on which the signing nations had fought against fascism. The preamble states its purpose:

FDR’s widow, Eleanor Roosevelt, successfully fought for the adoption (December 10, 1948) of the UN Universal Declaration of Human Rights, to which the U.S. and the world subscribed, including the right of a worker and his family to

an existence worthy of human dignity,” and that everyone “has the right to a standard of living adequate for the health and well-being of himself and of his family, including food, clothing, housing and medical care and necessary social services, and the right to security in the event of unemployment, sickness, disability, widowhood, old age, or other lack of livelihood in circumstances beyond his control.

Is this what we and the 9/11 terrorists are fighting for in Syria? 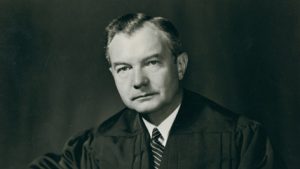 Judge Robert H. Jackson, shown here in his Supreme Court robes, was the chief prosecutor at the Nuremberg trials.

The standards of the Four Freedoms were solemnly forged into law, binding on all nations, by the 1946 decisions of the Nuremberg Trials of the Nazi war criminals.

The chief Nuremberg prosecutor for the U.S., Robert H. Jackson, had been FDR’s Attorney General and had previously worked out with Roosevelt the international legal principle that starting a war was illegal, except in case of self-defense.

This was applied to the Nazis, and it was decided that starting World War II was their chief crime, within which all the mayhem and genocide was encompassed: “To initiate a war of aggression … is the supreme international crime differing only from other war crimes in that it contains within itself the accumulated evil of the whole.”

This is the framework of American and human law, and decency.

Let us now remember and celebrate who we are as a people, as we were when FDR spoke 80 years ago.