Sept. 2, 2020—My reaction to watching most of the Democratic and Republican conventions can be summed up in one phrase: Wall Street is the winner. Neither party has taken on the reality of the economic and social collapse which the predatory Wall Street financial system has wrought, nor has it proposed a solution in line with the best American System traditions of this nation.[1] The leading Wall Street financiers don’t object to the increasing polarization which is fracturing our country. As the stock market figures show, they are reaping the benefits while unemployment, the collapse of vital infrastructure, and diseases of despair ravage us. And they have so far been given a pass.

As a partial antidote, I have chosen to republish Franklin Delano Roosevelt’s acceptance speech at the 1936 Democratic Party Convention. I believe it holds lessons for Democrats and Republicans alike.

The speech was given on June 27, 1936 in Philadelphia. The transcript came courtesy of the Presidency Project. Subheads have been added.–Nancy Spannaus 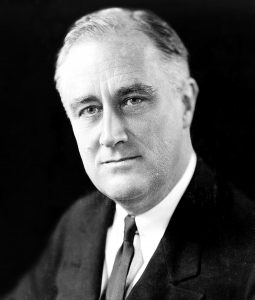 Senator Robinson, Members of the Democratic Convention, my friends:

Here, and in every community throughout the land, we are met at a time of great moment to the future of the Nation. It is an occasion to be dedicated to the simple and sincere expression of an attitude toward problems, the determination of which will profoundly affect America.

I come not only as a leader of a party, not only as a candidate for high office, but as one upon whom many critical hours have imposed and still impose a grave responsibility.

For the sympathy, help and confidence with which Americans have sustained me in my task I am grateful. For their loyalty I salute the members of our great party, in and out of political life in every part of the Union. I salute those of other parties, especially those in the Congress of the United States who on so many occasions have put partisanship aside. I thank the Governors of the several States, their Legislatures, their State and local officials who participated unselfishly and regardless of party in our efforts to achieve recovery and destroy abuses. Above all I thank the millions of Americans who have borne disaster bravely and have dared to smile through the storm.

America will not forget these recent years, will not forget that the rescue was not a mere party task. It was the concern of all of us. In our strength we rose together, rallied our energies together, applied the old rules of common sense, and together survived.

In those days we feared fear. That was why we fought fear. And today, my friends, we have won against the most dangerous of our foes. We have conquered fear.

All Is Not Well

But I cannot, with candor, tell you that all is well with the world. Clouds of suspicion, tides of ill-will and intolerance gather darkly in many places. In our own land we enjoy indeed a fullness of life greater than that of most Nations. But the rush of modern civilization itself has raised for us new difficulties, new problems which must be solved if we are to preserve to the United States the political and economic freedom for which Washington and Jefferson planned and fought.

Philadelphia is a good city in which to write American history. This is fitting ground on which to reaffirm the faith of our fathers; to pledge ourselves to restore to the people a wider freedom; to give to 1936 as the founders gave to 1776—an American way of life. 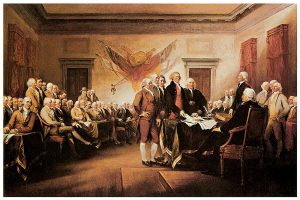 That very word freedom, in itself and of necessity, suggests freedom from some restraining power. In 1776 we sought freedom from the tyranny of a political autocracy—from the eighteenth-century royalists who held special privileges from the crown. It was to perpetuate their privilege that they governed without the consent of the governed; that they denied the right of free assembly and free speech; that they restricted the worship of God; that they put the average man’s property and the average man’s life in pawn to the mercenaries of dynastic power; that they regimented the people.

And so it was to win freedom from the tyranny of political autocracy that the American Revolution was fought. That victory gave the business of governing into the hands of the average man, who won the right with his neighbors to make and order his own destiny through his own Government. Political tyranny was wiped out at Philadelphia on July 4, 1776.

Since that struggle, however, man’s inventive genius released new forces in our land which reordered the lives of our people. The age of machinery, of railroads; of steam and electricity; the telegraph and the radio; mass production, mass distribution—all of these combined to bring forward a new civilization and with it a new problem for those who sought to remain free.

For out of this modern civilization economic royalists carved new dynasties. New kingdoms were built upon concentration of control over material things. Through new uses of corporations, banks and securities, new machinery of industry and agriculture, of labor and capital—all undreamed of by the fathers—the whole structure of modern life was impressed into this royal service.

There was no place among this royalty for our many thousands of small businessmen and merchants who sought to make a worthy use of the American system of initiative and profit. They were no more free than the worker or the farmer. Even honest and progressive-minded men of wealth, aware of their obligation to their generation, could never know just where they fitted into this dynastic scheme of things.

It was natural and perhaps human that the privileged princes of these new economic dynasties, thirsting for power, reached out for control over Government itself. They created a new despotism and wrapped it in the robes of legal sanction. In its service new mercenaries sought to regiment the people, their labor, and their property. And as a result, the average man once more confronts the problem that faced the Minute Man. 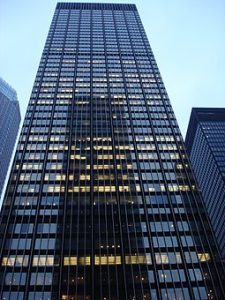 JPMorgan Chase (wikipedia), home of the “privileged princes” of finance

The hours men and women worked, the wages they received, the conditions of their labor—these had passed beyond the control of the people, and were imposed by this new industrial dictatorship. The savings of the average family, the capital of the small businessman, the investments set aside for old age—other people’s money—these were tools which the new economic royalty used to dig itself in.

Those who tilled the soil no longer reaped the rewards which were their right. The small measure of their gains was decreed by men in distant cities.

Throughout the Nation, opportunity was limited by monopoly. Individual initiative was crushed in the cogs of a great machine. The field open for free business was more and more restricted. Private enterprise, indeed, became too private. It became privileged enterprise, not free enterprise.

No Democracy with Economic Slavery

An old English judge once said: “Necessitous men are not free men.” Liberty requires opportunity to make a living—a living decent according to the standard of the time, a living which gives man not only enough to live by, but something to live for.

Against economic tyranny such as this, the American citizen could appeal only to the organized power of Government. The collapse of 1929 showed up the despotism for what it was. The election of 1932 was the people’s mandate to end it. Under that mandate it is being ended.

These economic royalists complain that we seek to overthrow the institutions of America. What they really complain of is that we seek to take away their power. Our allegiance to American institutions requires the overthrow of this kind of power. In vain they seek to hide behind the Flag and the Constitution. In their blindness they forget what the Flag and the Constitution stand for. Now, as always, they stand for democracy, not tyranny; for freedom, not subjection; and against a dictatorship by mob rule and the over-privileged alike. 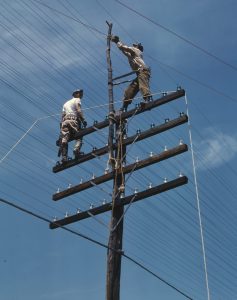 The brave and clear platform adopted by this Convention, to which I heartily subscribe, sets forth that Government in a modern civilization has certain inescapable obligations to its citizens, among which are protection of the family and the home, the establishment of a democracy of opportunity, and aid to those overtaken by disaster.

But the resolute enemy within our gates is ever ready to beat down our words unless in greater courage we will fight for them.

For more than three years we have fought for them. This Convention, in every word and deed, has pledged that that fight will go on.

A New Understanding of Government

The defeats and victories of these years have given to us as a people a new understanding of our Government and of ourselves. Never since the early days of the New England town meeting have the affairs of Government been so widely discussed and so clearly appreciated. It has been brought home to us that the only effective guide for the safety of this most worldly of worlds, the greatest guide of all, is moral principle.

We do not see faith, hope, and charity as unattainable ideals, but we use them as stout supports of a Nation fighting the fight for freedom in a modern civilization.

Faith— in the soundness of democracy in the midst of dictatorships.

Hope—renewed because we know so well the progress we have made.

Charity— in the true spirit of that grand old word. For charity literally translated from the original means love, the love that understands, that does not merely share the wealth of the giver, but in true sympathy and wisdom helps men to help themselves.

We seek not merely to make Government a mechanical implement, but to give it the vibrant personal character that is the very embodiment of human charity.

We are poor indeed if this Nation cannot afford to lift from every recess of American life the dread fear of the unemployed that they are not needed in the world. We cannot afford to accumulate a deficit in the books of human fortitude.

In the place of the palace of privilege we seek to build a temple out of faith and hope and charity.

It is a sobering thing, my friends, to be a servant of this great cause. We try in our daily work to remember that the cause belongs not to us, but to the people. The standard is not in the hands of you and me alone. It is carried by America. We seek daily to profit from experience, to learn to do better as our task proceeds. 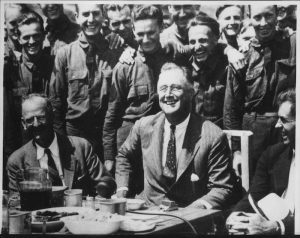 Governments can err, Presidents do make mistakes, but the immortal Dante tells us that divine justice weighs the sins of the cold-blooded and the sins of the warm-hearted in different scales.

In this world of ours in other lands, there are some people,[2] who, in times past, have lived and fought for freedom, and seem to have grown too weary to carry on the fight. They have sold their heritage of freedom for the illusion of a living. They have yielded their democracy.

I believe in my heart that only our success can stir their ancient hope. They begin to know that here in America we are waging a great and successful war. It is not alone a war against want and destitution and economic demoralization. It is more than that; it is a war for the survival of democracy. We are fighting to save a great and precious form of government for ourselves and for the world.

I accept the commission you have tendered me. I join with you. I am enlisted for the duration of the war.

[1] The most appropriate intervention came in the webinar sponsored by the Coalition for a National Infrastructure Bank.

[2] FDR is referring to the advance of Nazism in Europe. Remember, Hitler took power in 1933, and the threat he posed to the world was well-known to U.S. political circles, including FDR.