Oct. 18, 2018—To the chagrin of the international financial institutions, the FDR tradition is showing itself to be alive and well in Italy.

Most upsetting to the powers-that-be has been the Italian government’s determination to break the EU’s budget austerity rules, in the interest of fulfilling some of its promises for public spending. It has decided to approve a budget with a 2.4% deficit. This decision was defended in the Italian Chamber of Deputies on Oct. 11 by European Relations Minister Paolo Savona, who said, in part: 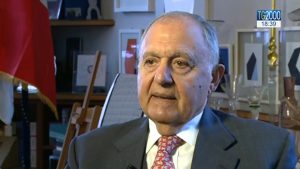 “I very much insist on the need to replicate, a hundred years later, what Roosevelt did with the New Deal and his reforms. He put together the industrialized north of the United States with the agricultural part of the country– which included serious flaws of racism — and he succeeded. Therefore, it is my belief that the experiment we are conducting at this moment is really a great step toward national unity, of coincidence between the interests of the advanced and the backward parts of the country — economically speaking.

“… it is an ambitious program, we are aware of that; but the New Deal program was ambitious too, although in a different context … it aims to respond to the increase of poverty since the crisis, especially among youth and large families, and in the southern regions of the country.

“We all agree that the country needs greater investment. Therefore, let us start to build a New Deal. … But the government program is very prudent, because we are aware that we must implement those reforms that Roosevelt started. Roosevelt enacted a substantial reform in the financial sector, on competition, and on industrial relations [He is referring to Glass-Steagall, the establishment of the Securities and Exchange Commission, etc.-ed.]. Those who know history … know that he took very important initiatives.”

Many of FDR’s initiatives  have now been rolled back, and are desperately needed again. Where are the U.S. statesmen who will fight to restore them?