FDR Knew How To Respond To a Monster Storm

The following was written in the aftermath of Hurricane Sandy in 2012, but the lessons apply today with the mega-disaster of Hurricane Harvey.

Among the more brilliant accomplishments of President Franklin Roosevelt’s Works Progress Administration (WPA) was the creation of a mobile workforce that could be deployed on a moment’s notice to battle hurricanes, floods, and fires. Where Barack Obama, like his predecessor during Hurricane Katrina, told Hurricane-devastated New Yorkers and New Jersians, effectively, “Don’t count on your government; you’re on your own,” FDR’s right-hand man, Harry Hopkins, was immediately on the scene, deploying his WPA army of formerly unemployed and desperate men and women, as a strike force capable of heroic action.

In January 1937, a series of torrential rains pelted the Ohio River Valley and left a trail of disaster. Fifteen percent of Cincinnati was underwater; 70% of Louisville, and 100% of Paducah, Ky were inundated. Cities up and down the Ohio River were in panic and chaos. Five hundred were dead and a million were left homeless. Hopkins, who was FDR’s flood relief commissioner, immediately arrived at the scene and oversaw relief, construction, flood control, and cleanup. He deployed more than 200,000 WPA workers to build sanitary privies, nail wooden catwalks to carry foot traffic over the swamps of mud, deliver relief supplies to the stricken population, clear refuse, remove garbage, and cook hot meals for the hungry.

Hopkins even deployed the Federal Theater Project to perform over 40 plays and shows in the flood ravaged states.

In his 2008 book, The Enduring Legacy of the WPA: American-Made, Nick Taylor recounts the heroic response of WPA to the catastrophic Great New England Hurricane which struck on Sept. 21, 1938. The fast-moving monster storm killed at least 682 people, and injured more than 1,700. Nine thousand homes were destroyed and 15,000 damaged. The toll to infrastructure was massive. 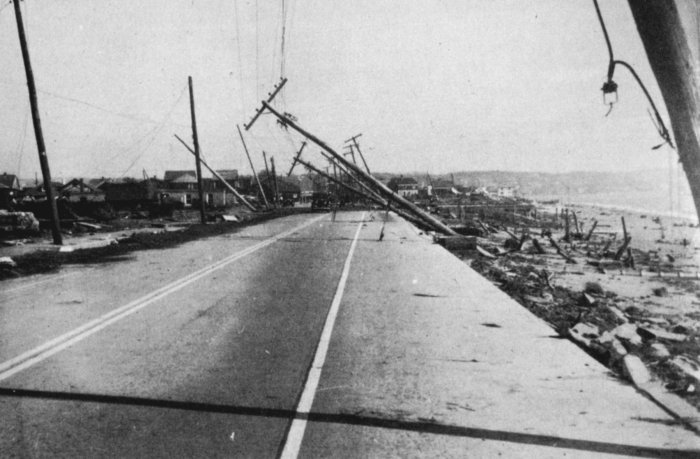 Island Park, Rhode Island, destroyed by a 40 foot breaker in the Hurricane of 1938 (wiki)

According to Taylor, President Roosevelt learned at 6:30 the next morning about the extent of the destruction. By 9:00 a.m., “the WPA, along with the Coast Guard, the army, the navy, the CCC [Civilian Conservation Corps], and the Red Cross, had field agents headed to Long Island and New England. Hopkins, in California, telephoned to say he was cutting his trip short, and would take the first available plane headed east.”

The response of Hopkins and Roosevelt was impressive: Within 18 hours they had deployed 100,000 WPA workers on the scene to engage in everything from dam repairs (to prevent even more flooding), to sandbagging, evacuation of stranded victims, and cleanup. WPA workers produced new clothing for victims, staffed refugee centers, and orchestrated the cleanup efforts.

“[S]o swift and efficient was that recovery work that by late November, the storm debris had largely disappeared and much of New England was looking forward to a normal winter,” Taylor wrote. The chairman of the Red Cross credited the WPA and the other agencies for “one of the most amazing disaster recoveries this organization has ever known.” —

Watch the video of the 1938 Hurricane here, “The Shock-troops of Disaster“, produced by the WPA.