Feb. 8, 2021—It is not only necessary, but urgent that the new Administration and U.S. Congress act immediately to expand investment in nuclear power. Such an investment conforms perfectly with Alexander Hamilton’s principles for the American System in two crucial ways. First, it puts the “mechanical genius” of the American people to work in the most advanced, efficient, and safe means of producing energy yet invented.  Second, it fulfills the responsibility of the Federal government to stimulate technological progress and prosperity for our nation today, and its posterity.

My arguments, you may notice, are not quite the same as those of the current crusaders for supporting and expanding our nuclear fission fleet. Those advocates are focusing primarily on the incontestable fact that nuclear power produces “carbon-free” electricity, and thus makes it conceivable to reach the Biden administration’s goal of zero carbon emissions from electricity production in the United States by 2035. At present, our nation’s 94 nuclear power plants produce 20% of the nation’s electricity[1], and more than 50% of its “carbon-free” electricity production.

The Vogtle nuclear plant, under construction in Georgia, is the only plant being built in the U.S.

So, it is true that if we want “carbon-free” energy, we must expand nuclear fast.

Such a political argument for nuclear seems to be making some headway. For the first time since the early 1970s, the Democratic Party platform explicitly endorsed an energy program that included support for “existing and advanced nuclear” power. The Federal budget appropriation passed in December 2020 substantially, although not sufficiently, increased funding for nuclear research and development, including demonstration projects for advanced designs. And there is a bipartisan push in Congress for reforming licensing procedures, expanding funding, and preserving the current nuclear fleet, which is crippled by the favoritism being given to unreliable renewables like wind and solar.

But incremental progress is not enough. At the dawn of 2021, according to Maria Korsnick of the Nuclear Energy Institute, eight more current nuclear fission reactors are threatened with shutdowns; that’s a massive threatened decrease in our electricity production. Tens of thousands of high-paying jobs are at stake, which often represent the lifeline to small communities. And what would such a cutback mean for the plans to dramatically expand electricity use?  Experts project that the world already faces the need to double its electricity production over the next 20 years.

And, does that requirement include providing life-saving electricity to the 940 million people globally who lack access?  By the way, 60,000 of those people are in the United States – and that’s probably an undercount.

Nor should we only be setting our sights on redressing that inequity. Plans for a more prosperous, environmentally friendly future demand an even more massive expansion of electricity production, in areas ranging from high-speed rail to universal broadband to quality health care. 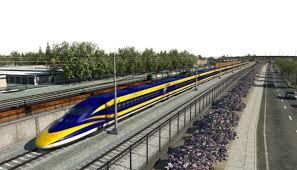 A drawing of the highspeed rail line under construction in California.

The immediate need, then, is to not only save our current plants, but go full-steam ahead with building and licensing nuclear power stations, especially utilizing the new, cheaper, safer, and more flexible designs currently underway. Rather than be an “add-on,” nuclear should be at the center of the upgrading of our electric grid. That’s going to take a much more high-profile campaign to win public support and push through the legislation to get it done.

The Decisive Advantages of Nuclear Energy

New Jersey Senator Cory Booker played a very positive role during the Democratic primary campaign when he came out swinging in favor of a major drive to invest in nuclear energy, including the new designs. (See “The Necessity for Nuclear Energy”) Booker stressed the reliability, safety, and cleanliness of nuclear power, and its unique ability to meet the need for a huge expansion of electricity in the future.

Let me briefly recapitulate some essentials.

Nuclear fission is the most efficient form of electricity production currently available, and it is consistently improving its performance. The industry’s latest figures show the nation’s plants producing at 93.5% of their capacity – which means they are generating electricity almost all the time. This compares to the next highest source (natural gas) with 56.8% and the lowest source (solar) with 24.5). [figures from the U.S. Office of Nuclear Energy] What this shows is that other sources of electricity require backup sources in order to provide the reliable energy we need.

Second, nuclear fission plants, even in their present large reactors, are the most dense source of power, allowing a huge amount of energy to be produced in a compact area.  This compares to the acres and acres required to install solar parks or wind farms with the equivalent capacity. (And in the case of solar, that means eliminating a lot of trees!) Nuclear expert Jonathan Tennenbaum has noted in addition that it would take 50 to 100 times more steel and cement to build a wind farm with the capacity of a nuclear plant than it would take to build the plant. (see footnote 1) In sum, going nuclear is actually the key to reviving our economy’s productivity, which remains dangerously low. 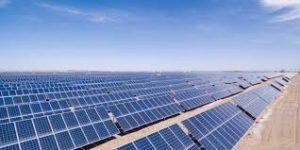 Is this what you want our landscape to look like? A solar park in Egypt.

As for safety, there have been zero deaths from commercial nuclear power plants recorded in the United States. This has not prevented anti-nuclear activists from hypothesizing long-term negative effects of low-level radiation, of course, but the absence of deaths is a fact even reluctantly admitted by nuclear skeptics. Not that the current plants couldn’t be safer; in fact, the new advanced designs incorporate many features that would do just that.  But, compared to the record to deaths from fossil fuels (mining accidents, air pollution) and even accidents while building wind and solar, the record is pretty stellar.

Then there’s the question of what would replace the electricity currently being provided by nuclear, should these plants be shuttered.  According to the Energy Information Agency, there are nuclear plants in 30 states. Twelve of those states rely on them for more than 30% of their electricity needs; New Hampshire (61%), South Carolina (56%), and Illinois (54%) depend for more than 50%.

Of course, nuclear fission is not the end-all-and-be-all of power production.  Nuclear science is currently also making major strides toward commercial development of nuclear fusion energy, which is both more efficient and safe, and obviates problems like the scarcity of uranium and nuclear waste. But nuclear fission is what is now available, and we don’t have time to waste.

A Tale of Two Countries

A five-part series[2] by Dr. Tennenbaum in Asia Times last winter argued vigorously, and with much documentation, that “if you want the system to be carbon-free, then the only available option is nuclear energy.” He adds: “The irony of the situation is that the environmentalist movement is to a significant extent responsible for the continued dependence on coal and gas power plants.”

Tennenbaum compared the cases of France and Germany. 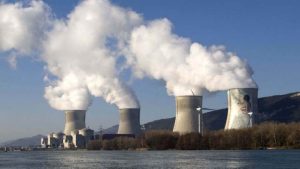 In 1974, faced with the oil shock of the previous year, the French government of Pierre Messmer made a command decision: To avoid being held hostage to the price of oil, France should go nuclear.  Other countries have raw materials, Messmer said; we have ideas. And France put those ideas to work building four nuclear plants a year, until, by 1990, 75% of the nation’s electricity came from nuclear power plants.

While critical of France’s decision to build only large Light Water Reactors, Tennenbaum shows that a dramatic shift can be successful. Today France generates sufficient electricity to sell to its neighbors, like Germany, which has decided to shut down its nuclear industry entirely. France’s CO2 emissions from electricity production are among the lowest in the world. 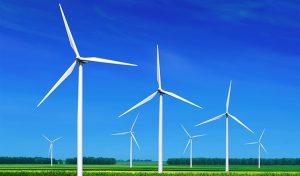 A windpark near Stuttgart in Germany

Germany, on the other hand, prides itself on being a model for reliance on non-nuclear renewables, primarily wind turbines. In terms of sheer amount of electricity, they account for  35% of that nation’s electricity consumption; however, their output is erratic, fluctuating from minute to minute depending on wind conditions. As a result, the  average output of the turbines is only 17% of installed capacity. When the wind drops off and the Sun is not shining,  Germany has to rely on its backup power (including coal), plus imported electricity from France and Sweden (40% nuclear) to avoid a blackout.  There has been a huge rise in prices, and much resistance to long transmission lines, living next to noisy windmills, and the destruction of the environment. Without nuclear power, the goal of zero-carbon is hardly in sight.

If France could do it, why not the United States?  Given the financial commitment of the Federal government (including through a National Infrastructure Bank like H.R. 6422), rational changes in licensing procedures, and inclusion of nuclear in the non-carbon-emitting category (the official term is going “technology-neutral”), we could save our existing plants, and begin a nuclear renaissance.

That’s not saying it wouldn’t be tough.  We have taken down our industrial capacity to a huge extent, so that producing 500 to 1000 megawatt plants would be virtually impossible. However, the small modular reactors, some of which are going through the licensing procedure, are on the verge of being producible, and the prospect of assembly-line production is not far distant.  We would still have to gear up production of materials.

(This is not to obviate cooperation with other nations, such as China and Russia, who are making major strides in advanced models and floating nuclear plants, as well as the international tokamak project on fusion (ITER) ongoing in France.) 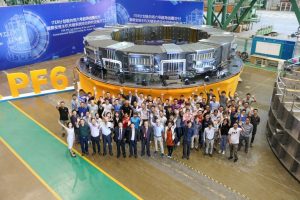 Tennenbaum reviews four of the promising new reactor models in his series: molten salt, traveling-wave, pebble-bed, and small modular reactors. They all should be pursued, along with nuclear fusion. The science is on our side.

To say it can’t be done, is to consign the world to an increasing inability to sustain its population with the growing standard of living, and likely to devastating depopulation itself. Other than a relative few zero-growth fanatics, who would want to do that?

[1] One amazing fact is that this percentage has basically stayed the same while the number of operating plants has been reduced from more than 100 to the 94 today. Efficiency has constantly increased.

[2] You can access all five articles of Tennenbaum’s articles by clicking on the final one in the series.