Feb. 3, 2021—The AmericanSystemNow YouTube channel now features the recent video documentary by Alexander Hamilton researcher Marianne Als, “The Evidence for Hamilton Against Slavery.” I hope you will review it and also subscribe, for there will be much more educational material on Hamilton and the American System coming in the weeks ahead.

Als has also now made available a companion document which provides the urls for her sources, thus allowing viewers to explore the evidence for themselves. The PDF is available at https://documentcloud.adobe.com/link/review?uri=urn:aaid:scds:US:b0aaa760-a92a-48be-9143-c2e955b2ed99. 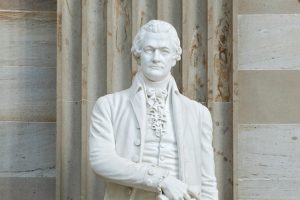 So far, unfortunately, there has been no visible backing-off by the author, or the major media purveyors, of the slanders that Alexander Hamilton was an enslaver.  Thus, as I have encountered in some of my discussions, many naïve people are being duped by the patina of “real evidence” (notations in his cashbook) presented by accuser Jesse Serfilippi.

Yet, as Als documents, there is no hard evidence that Alexander Hamilton owned slaves, and there is concrete evidence, including census records, that he did not.  And that’s not counting Hamilton’s documented history of actions against slavery, in the New York Manumission Society, the Army, and economic policy.

A fuller refutation of the Serfilippi “evidence” has been published in the form of a 50-page research paper by the pseudonymous Philo Hamilton and Hamilton biographer Michael E. Newton. The paper has been made available to all those purveying the accusations against Hamilton, but, with the exception of a letter to the editor which I had published in the Albany Times-Union, only one publication has so far had the nerve to give print space to the refutation.

On January 16, the New York Daily News published an op-ed by Philo Hamilton, under the title “The Alexander Hamilton Slavery Smear.” The essay took on a number of Serfilippi’s misrepresentations in detail, showing that she has twisted the facts to make it appear as if Hamilton owned slaves. After adding a summary of Hamilton’s work with the New York Manumission Society, Philo Hamilton concluded: “Hamilton was no friend of slavery. Since Hamilton himself cannot write his way out of this accusation, others who respect his legacy must.”

The Daily News has an estimated circulation of 200,000 daily, making it the 11th most read newspaper in the United States (according to Wikipedia).

Why is it important to set the record straight on this issue?  Because Americans need to become acquainted once again with the American System principles of economy which Hamilton established, and which we need to revive today. There was never unanimity on these principles, and there were many fights and compromises over the centuries. But knowing these principles, which could have led to a peaceful abolition of slavery, can bolster us in the task of setting our nation aright.

AmericanSystemNow has set the task of unearthing and educating Americans on these long-buried principles. Subscriptions to our various media channels (twitter, blog, and YouTube) will set you on that path.

Nancy Spannaus is the author of Hamilton Versus Wall Street : The Core Principles of the American System of Economics.