Economic Experts: Put Wall Street Back in Its Box

Sept. 27, 2018—A blockbuster forum at the National Press Club last night brought together five economic experts to discuss the 2008 financial crash and what can be done to prevent a new one. Addressing the audience of approximately 100 people were: 1) Nomi Prins, former Wall Street executive author and speaker; 2) Robert Kuttner, co-founder and co-editor of The American Prospect; 3) Marcus Stanley, policy director for the Americans for Financial Reform; 4) Professor Arthur Wilmarth, George Washington University Law School; and, 5) Bart Naylor, financial policy advocate for the Public Citizen. 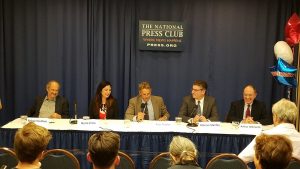 Naylor set the stage by noting the need to “bridle” Wall Street to prevent the 2008  “tragedy” from being repeated. Each of the other experts then presented  his or her evaluation of the causes of the crisis, and the direction for a solution. Their opening statements were followed by a short dialogue among the panelists and abundant audience questions—until the event had to be cut short for time.

I summarize the leading conclusion of each speaker here. A video of the event has been posted.