Demand for Major Infrastructure Program Grows, But How Will It Be Funded?

Jan. 12, 2018—As the 2018 Federal legislative session opens, demands for a major Federal infrastructure program are getting louder, and encompassing more sections of the population. From all sides of the political spectrum, organizations are calling for immediate action to repair and upgrade the nation’s transportation grid, water systems, airports, energy grid, and ports.

On January 8 the President of the National Association of Manufacturers (NAM) sent a letter to President Trump, reiterating that organization’s demand that he deliver on his pledge of a $1 trillion infrastructure plan. “The infrastructure investments of the 1950s and 1960s brought tremendous economic benefits, built strong communities, improved productivity and competitiveness and allowed manufacturing to grow and put people to work in solid middle-class jobs,” wrote Jay Timmons, NAM’s president and CEO. “Today, however, as more and more of our infrastructure crumbles, it is not keeping up with modern demands for safety and innovation, nor is it giving American workers the tools they need to compete with the rest of the world.”

The NAM letter follows the issuance of a letter to the leadership of the House and Senate last week by an alliance of more than 120 trade groups, who also demanded immediate action, especially on the collapsing transportation infrastructure. On Jan. 10 the Transportation Construction Coalition, which combines unions with industry spokesmen, issued a statement supporting immediate action to pour funds into upgrading the nation’s infrastructure, including by replenishing the Highway Trust Fund.

January 10 also saw the issuance of a report from the 48 member Problem Solvers Caucus of the Congress, entitled Rebuilding America’s infrastructure. The 16-page report floats a number of ideas for more Federal support for meeting what it estimate as a likely $2 trillion deficit in the nation’s infrastructure, most of which are vectored toward providing incentives to private industry. Spokesmen for the group have denied that they support increasing the Federal gasoline tax, which would be a logical and relatively painless means of increasing the revenue stream for public transport investment.

Both NAM, which represents 12 million members, and the Transportation coalition address the issue of replenishing the Highway Trust Fund, although they don’t come right out and demand an increase in the Federal tax, which has not been raised since 1993. By contrast, the Building America’s Future Group, led by former New York City Mayor Michael Bloomberg, former U.S. Transportation Secretary Ray LaHood, and former Pennsylvania Governor Ed Rendell, is calling for an increase in the tax, as one step in providing revenue for a broad program of upgrading of U.S. infrastructure.

President Trump himself has indicated his interest in raising the gas tax, and simultaneously consistently thrown cold water on the idea that Public-Private Partnerships, which turn over critical infrastructure to private companies which demand high user fees and other government perks, could fill the sinkhole left by decades of lack of investment in transport of all kinds—bridges, rails, highways, airports, and mass transit. However, the President’s chief Economic Adviser Gary Cohn and the Republican Congressional leadership have been adamant in opposing the raising of the gas tax.

This upsurge of demand for infrastructure from industry leaders is echoed on what is typically the other end of the political spectrum, the Progressive movement. The Progressive Caucus of the Congress has issued a $2 trillion dollar program  which addresses most of the major areas of need. 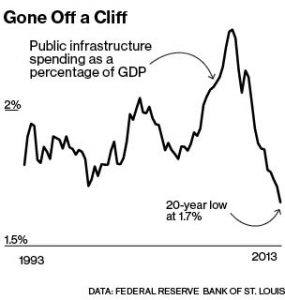 In the face of disagreements within the Republican Party itself over funding issues, it is now reported that President Trump will likely put off his push for the major infrastructure program he promised until February, at least. Even worse, his allies in Congress are poised to implement more cuts which will worsen the infrastructure situation, or, as in the Gateway Project in New York-New Jersey, sabotage essential upgrades. The Trump Administration reneged on its promised backing for the Gateway project at the beginning of the year, under the ruse that it was a “local” issue, not a nationally significant one.

Congress could, however, provide a solution to the funding crisis, if it followed the model of FDR’s Reconstruction Finance Corporation, or established a National Infrastructure Bank  along the lines of Hamilton’s Bank of the United States. Putting public credit behind a lending institution that would issue long-term, low-interest loans for major capital projects, either through a Capital Budget, or such a banking institution, would permit the necessary major investment without costly giveaways to private capital, or major tax increases.

Such a multi-trillion dollar investment—including in the areas still acutely suffering from the aftermath of 2017’s hurricane, floods, and fires–is required not for the sake of “competitiveness” (as NAM insists), but to advance the health and welfare of a nation standing on the edge of physical collapse.