Nov. 30, 2019—On November 26, the American Medical Association issued a dramatic new wake-up call to Americans about the rising death rates which have made the United States the only industrialized country in the world with a declining life expectancy.

The AMA’s “Special Communication” was an article entitled Life Expectancy and Mortality Rates in the United States, 1959-2017, written by Doctor Steven H. Woolf of the Virginia Commonwealth University School of Medicine, Richmond, and Heidi Schoomaker of The Eastern Virginia Medical School, Norfolk, Virginia. 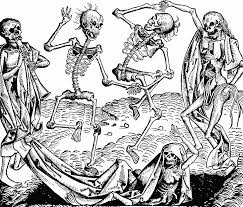 Dance of Death, a depiction of the plague-ridden 14th century

What Woolf and Schoomaker document from government statistics is not exactly new.  They describe the process of increasing death rates, concentrated within the U.S. working-age population (24 to 64 years of age), which has been measurable since 2010. While the work of Princeton scholars Angus and Deaton back in 2015 had documented this trend within non-Hispanic whites in the United States, Woolf and Schoomaker show that it has now spread to all ethnic groups. This is the third year of a decline.

While the increase in the death rate is substantial (6 percent from 2010 to 2017 among working age people), it is much higher among the cohort between 25 and 34. But perhaps the most revealing statistic concerns the geographical concentration of the jump. The official Abstract for the article describes it:

The common characteristic of these regions is obvious: deindustrialization.

Woolf and Schoomaker decline to attribute a cause to this trend, although Dr. Woolf specifically rebuffs the idea that it’s due primarily to lack of access to medical care, although the disparity in health services is one of the major differences between the United States and the industrialized nations which have significantly higher life expectancies. In fact, while U.S. life expectancies were increasing up to 2014, the rate of increase was slowing. The Abstract summarizes the process as follows:

The recent decrease in US life expectancy culminated a period of increasing cause-specific mortality among adults aged 25 to 64 years that began in the 1990s, ultimately producing an increase in all-cause mortality that began in 2010. During 2010-2017, midlife all-cause mortality rates increased from 328.5 deaths/100 000 to 348.2 deaths/100 000. By 2014, midlife mortality was increasing across all racial groups, caused by drug overdoses, alcohol abuse, suicides, and a diverse list of organ system diseases. 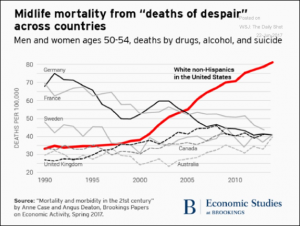 Again, there is another significant discrepancy between these economies and those of the United States, which may help point us to the cause: they have among the highest percentages of their workforce in manufacturing (production).  To be specific:  Japan = 16.7%; Germany = 19.3%; and Italy = 18.3%.  The level of the manufacturing workforce in the United States has declined to 10% (according to United Nations figures).

The idea that the increasing death rate (especially the “deaths of despair) has been related to the take-down of jobs in the U.S. industrial heartland has been raised before, of course. One particularly strong study was done in Ohio in November 2017, where the C. William SWANK Program in Rural-Urban Policy presented a devastating picture of the correlation between pockets of unemployment and high rates of opioid addiction and death. But so far, neither the Congress nor the Administration has drawn the obvious conclusions about the need to change U.S. economic policy.

Steps Toward a Solution

I addressed this situation in some depth on this blog back in December of 2017, and concluded with an emphasis on President Franklin Roosevelt’s approach to our nation’s existential crisis in the 1930s. This blog’s coverage of the opioid crisis, one of the significant components of the rising death rate, has also underscored the point that a dramatic change in economic policy – away from financialization and the service economy, and back to industrial growth – is essential to solving the problem. 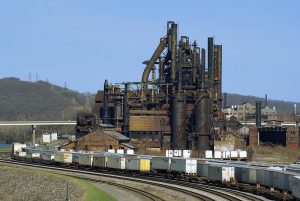 Now, two years later, the crisis is worse. Not even baby-steps have been taken in the direction of restoring a vibrant manufacturing base, which emphatically depends upon dramatically upgrading our basic infrastructure, employing millions of people in productive work, and providing the country with a vision (a future) of real technological accomplishment for the whole nation, and the world.

This will be a long process. The fundamental principles required to sustain and prosper an economy – the principles which form the core of the American System of Economics ­– have been violated more and more savagely over recent decades, especially since the assassination of President Kennedy.  This has not been just a matter of failures in economic policy per se. Among the most significant violations has been the degradation of the very idea of the productive powers of labor, and the value of the human individual. Why, even the idea of progress has come under attack.

While most people do not look at the processes in society as a whole which are determining the nation’s direction, they do react. Faced with the horrors of drug addiction or suicide in their own community and family, the state of their bank account, and job insecurity, they get enraged and grasp for whatever shadow of a solution is waved before them. And unlike in the times of leaders such as John F. Kennedy and Franklin Roosevelt, there appear to be no leaders willing and able to address the reality on the level required. 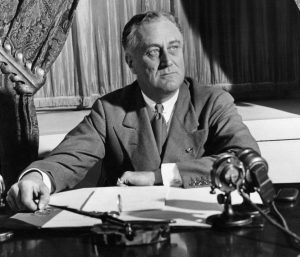 Franklin Roosevelt Addresses the Nation on Banking Crisis in March, 1933

There comes a time when a nation has to face the fundamental questions which will determine whether it will live or die.  The obvious circumstance for such a confrontation is often the outbreak of a major war or pandemic disease, neither of which, fortunately, is currently afflicting the United States. But the collapse of morale and productivity, and the increase in death rates which this latest report highlights, are equally deadly threats – and all too easy for citizens to ignore, until it is too late.