Nov. 14, 2018—A group of approximately 25 citizen-leaders gathered in a Washington, D.C. library last night to discuss how to address the question of the nation’s collapsing infrastructure. The lively, almost-unstoppable discussion centered around a slide show presentation on a National Infrastructure Bank (NIB)  proposal, given by macro-economist and citizen-activist Alphecca Muttardy. 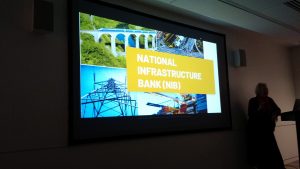 Angela Vullo opened the meeting by stating the intention of the meeting’s convenors, an informal group which has dubbed itself the Economic Policy Interest Group. Our only focus is to rein in Wall Street with Glass-Steagall, and create a real recovery by establishing a National Infrastructure Bank which will create jobs and rebuild the country, she said. Getting a Federal Bill to establish the NIB, along Hamiltonian principles, is a life and death issue for the country.

Ms. Muttardy’s thorough presentation encompassed everything from the dire condition of current U.S. infrastructure, to the problems with the current proposals, the American precedents for successful infrastructure funding, and then the specifics of how an NIB built on Hamiltonian principles would function. In this article, I can only hit some of the highlights, but the slide show is immediately available upon request.

This NIB proposal will solve two of the big problems we face as a nation, Muttardy began: income inequality and our fraying infrastructure. Forty percent of our bridges are in danger of collapse, dams are collapsing, and there’s no money to address even the $4.7 trillion estimated to be necessary simply for repair by the ASCE. While China is spending 8.8% of the GDP on infrastructure, and India is spending 5.2%, the U.S. is currently only coming up with 2.5%, and the needs are glaring.

The ideas presented by President Trump and the Democrats to address the issue fail to deal with the funding crisis.  The Democrats want to reverse the Trump tax cuts—which is highly unlikely. Otherwise they call for spending about a trillion from the Federal budget, but the current indebtedness of the economy, already over 100% of GDP, won’t allow it.  President Trump wants to have the states and localities fund the new infrastructure, heavily through the use of Public Private Partnerships (PPPs), which have mostly been disastrous.

The banks actually have plenty of money, she said, but they don’t want to invest it. So, we have to go with public infrastructure, funding through a National Infrastructure Bank.

Ms. Muttardy then identified four precedents for the NIB in American history: Alexander Hamilton’s Bank of the United States; John Quincy Adams’ Second Bank of the United States; Abraham Lincoln’s national banking system; and the Reconstruction Finance Corporation.  It was under these funding mechanisms, and only such mechanisms as these, that the U.S. economy became “super-charged” with highly productive growth.

The NIB would be based on the principles used by these banks, and have the crucial characteristics required to solve the problem:  1) the necessary scale—very large—to deal with our national crisis; 2) being in line with the American tradition; 3) not requiring yearly budget allocations by the Congress—which has been a major roadblock; and 4) being comprehensive in its scope.

How the Bank Would Work

The NIB will be a privately run bank chartered by Congress and capitalized by Federal government public debt. The proposal calls for “enticing” holders of the current $17 trillion in U.S. public debt to invest $4 trillion of that in the bank, forming its initial stock. In other words: No new Federal debt will be needed.

This preferred stock would receive a dividend from the Federal budget from a designated revenue stream, most likely an increase in the Federal gas tax, or a financial transaction tax. The idea would be to set this dividend at 2% over the current rate on Treasuries; Muttardy estimated the cost at $80 billion a year.

The NIB would then be able to make loans to local and state governments for needed infrastructure projects. Once approved for the loan, they would get the money and start spending it to get building—putting people to work. The result would be an immediate increase in economic growth, and corresponding improvements in living standards. Those improvements, in turn, would result in an increase in tax revenue for the Federal government, thus improving public finances as well as productivity and economic growth.

Muttardy also noted that this NIB plan calls for the Board of Directors to include engineers and others with competence in building projects, but not Wall Street bankers. Provision is also made for public evaluation and transparency.

The last section of Ms. Muttardy’s presentation dealt with the array of projects which could and should be funded under  such an NIB. This included high speed rail, ports and waterways, and broadband to the 23 million Americans who still have no access to the internet. She made an impassioned plea for the funding of nuclear fusion energy, to deal with power problems.

The preliminary work has been done on many worthy projects, she noted, putting upon the screen a study by the U.S. Treasury of 40 mega-projects urgently needed in the country. That study included estimates of how much each project would “pay for itself” through increases in productivity, elimination of inefficiencies (like traffic jams), and the like.  Some of those estimates go as high as 7 to 1!

Ms. Muttardy also emphasized the subjective shift that implementing the NIB would create in the American population, one desperately needed as is obvious in the opioid epidemic. FDR put it this way in September 1934:

To those who say that our expenditures for Public Works and other means for recovery are a waste that we cannot afford, I answer that no country, however rich, can afford the waste of its human resources. Demoralization caused by vast unemployment is our greatest extravagance. Morally, it is the greatest menace to our social order.

Despite the fact that no Congressional sponsor has yet been found, there is already considerable popular momentum behind the NIB concept. The idea of a Hamiltonian infrastructure bank has been endorsed by the Democratic Municipal Officials (DMO, 40,000 elected Democratic council persons and mayors); the Democratic National Committee (a modified version of the DMO resolution); Our Revolution Northern Virginia; Loudoun County Progressive Democrats; National Federation of Federal Employees (110,000 members); and the National Latino Farmers and Ranchers Trade Association.  Also: sixteen State Legislatures introduced resolutions in support of the proposed NIB (including Rasoul-Guzman Virginia HR 1) in 2018; while dozens of regional labor unions, mayors, state legislators, and city councils across America have written to their Congressmen in support of the proposed legislation.