Sept. 8, 2018—The National Association of Federally-Insured Credit Unions (NAFCU) makes a strong case for reinstating the Glass-Steagall Act, as a means of protecting their institutions and the U.S. economy in a policy paper released earlier this week. “Modernizing Financial Services: The Glass-Steagall Act Revisited” reviews the way in which the post-2008 financial architecture has led to the ballooning of the “too-big-to-fail” banks, and a hostile environment for their community-based, non-profit credit institutions. It states:

“One solution worth consideration is the reaction of a modern Glass-Steagall Act (GSA), which would alleviate competitive inequalities and improve overall financial stability in times of stress by separating commercial and investment banking activities. NAFCU supports a bipartisan effort to create a modern FSA because, as many on both sides of the aisle, including former Speaker of the House of Representatives, Newt Gingrich (R-GA), have recognized: `Repealing the Glass-Steagall Act was probably a mistake. We should reestablish dividing up the big banks into a banking function and an investment function and separating them out again.’|” 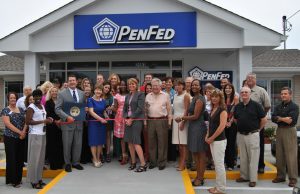 The PenFed Credit Union was established in 1935.

NAFCU CEO Dan Berger, in an interview with the American Banker, made clear that his organization not only wants a policy discussion, but plans to fight back against the Wall Street-centered banks. He specifically called for hearings in the House Financial Services Committee on Glass-Steagall legislation already before Congress “right away.”

The NAFCU is a product of the Federal Credit Union Act, which was passed in 1934 in the course of the Roosevelt Administration’s overhaul of the U.S. banking system.  Its mission has been to extend credit to communities for projects that the large, profit-seeking banks eschewed then, and now. In the face of the “massive concentration and consolidation in the financial industry” which took off after the 1999 repeal of Glass-Steagall, credit unions are now finding it hard to survive. More than two thousand have closed between 2008 and 2017 alone.

The NAFCU’s 18 page report appears to rely heavily on the analysis of the 2008 crash put together by the 2010 Angelides Report on the crisis, which emphasized the role of the growth of the unregulated shadow banking system in triggering the blowout. One of the consultants for that report is an outspoken advocate for returning to Glass-Steagall, Professor Arthur Wilmarth, Jr.

A Sept. 7 column in the American Banker took note of the NAFCU policy paper in an analysis piece that raised the possibility that Glass-Steagall could come back on the political agenda over the next months. Author Victoria Finkle notes the qualified support for restoring Glass-Steagall by the Independent Community Bankers of America, and the legislation before Congress to reinstitute the law.

Restoring Glass-Steagall is an essential step toward re-establishing an American System approach to rebuilding the U.S. economy. It is also an essential protection in the face of what an increasing number of financial analysts see as a looming new financial blowout worse than 2008, thanks to the deregulatory, speculative environment fostered by the elimination of Glass-Steagall.