Aug. 1, 2017—In the wake of the failure of the slash-and-burn Republican healthcare bill in the Senate, Congressmen John Conyers (D-Mich) and Ro Khanna (D-Calif) signed a public pledge on July 28 at a Washington, D.C. press conference , to press for H.R. 676, Conyers’ Medicare-for-All legislation. The two appeared at an event sponsored by the PAC Justice Democrats, which has been circulating the pledge since March. 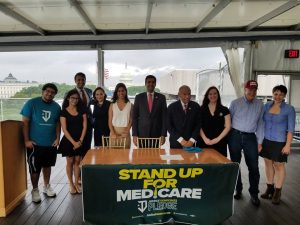 Before the assemblage of Justice Democrats, Conyers and Khanna solemnly intoned: “I pledge to the people of my district, my state, and all of America that I will stand up for Medicare-for-All in any public appearance or statement addressing our country’s healthcare crisis.”

In a short speech following his pledge, Rep. Conyers emphasized the moral argument for the bill, which will provide universal medical care. “The sooner we get the bill, the sooner we will save lives,” he said. We have to follow the example of Martin Luther King: Do the right thing, and stick to it. In his remarks, Rep. Khanna emphasized a series of economic arguments in favor of H.R. 676. Opponents complain that Single Payer will cost $32 trillion over the next 10 years, he said, but they fail to mention that the current system is projected to cost $49 trillion. He then argued that the bill would save money on hospitals (citing CEO pay), drug costs, and insurance costs.

H.R. 676 currently has 117 sponsors. Polls show it to be an increasingly popular option with the public, but consideration of the bill in the House has been blocked by Republican Committee chairmen. The Justice Democrats are seeking to up the pressure by campaigning for more Congressmen to take the pledge.