June 16, 2017—Eighty-four years ago today, President Franklin Roosevelt capped off a marathon 100-day session of Congress with the signing of the Glass-Steagall Banking Bill. That bill, which was actively promoted by some powerful Wall Street bankers as well as the general public, was specifically aimed at providing for “the safer and more effective use of the assets of banks, to regulate interbank control, [and to] prevent the undue diversion of funds into speculative operations.” It worked to prevent a systemic banking crisis for 66 years, until a bipartisan Congressional majority overturned its major features in 1999.

Ten years after the devastating Crash of 2007-8, the time is overripe for reinstituting this key element of a sound banking system. All the signs of a new major debt implosion are available to those willing to face facts, and a broad base of support for taking action to protect the commercial banking system from the collapse of the speculative bubble has been built up. That base includes big bankers, labor unions, academics, and others. This support even resulted in the inclusion of planks for Glass-Steagall in both the Democratic Party and Republican Party platforms for the 2016 Presidential election.

In this context, two of the leading fighters for reinstating Glass-Steagall—Representatives Marcy Kaptur (D-Ohio) and Walter Jones (R-NC)–decided to escalate their fight in the Congress. On June 2, they submitted Kaptur’s Return to Prudent Banking Act (H.R. 790) as an amendment to the Republican majority’s CHOICE Act (H.R. 10), a deregulation bill to replace Dodd-Frank. H.R. 10 was poised to go to the House floor, but both Kaptur and Jones were permitted to address the House Rules Committee on June 6 in support of their amendment. 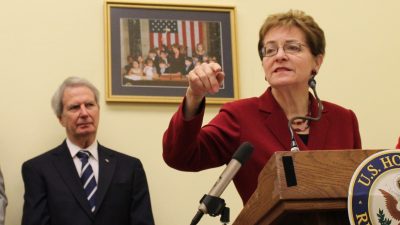 Rep. Jones led off the testimony, expressing once again his regret at having voted for the repeal of Glass-Steagall in 1999. By doing that, we created a change which created chaos, and then, when the crisis came, “we bailed out dishonesty and greed,” Jones said. He issued a personal, impassioned plea for the Congress to put Glass-Steagall on the table now.

Rep. Marcy Kaptur then took the floor. She asked the Rules Committee members to “set up a fair debate on reinstating the Glass-Steagall Act” in the House, to return a “healthier, more competitive, sounder banking system instead of rampant [Wall Street] speculation.” She said, “This rests on separating risky speculation from prudent banking … Glass-Steagall separation.”

Kaptur told the Committee that the decades in which Glass-Steagall was the nation’s primary bank regulation “have been referred to as a golden era” of economic growth, plentiful lending credit, and fair interest paid to consumers on deposits. She said that nearly two-thirds of the community banks which served that era had disappeared since the 1990s when Glass-Steagall was eliminated, and the number of credit unions has been cut in half. Kaptur denounced the six biggest U.S. banks, which are making $141 billion a year in profits while “Grandma Moses earns nothing on her CD.”

“Bernie Sanders campaigned on breaking up these banks,” Kaptur said. “So did Donald Trump. Both Parties’ platforms endorsed it, and the RNC wasted fewer words than the Democrats: `We support restoring the 1933 Glass-Steagall Act.'”
“Our nation has a chance to get this right before another looming financial crisis, perhaps anchored in corporate debt, hits,” Kaptur concluded. “Congress must not wait; the chance to restore Glass-Steagall is now.”

On the House Floor

The Rules Committee, on a party-line vote, refused to accept the amendment, or permit a debate on the House floor about it. Thus, two days later, when H.R. 10 came up for a House vote, Rep. Kaptur took the floor once again:

“Mr. Speaker, I rise today to oppose the Financial CHOICE Act, which abandons the American people, as well as safety and soundness, in favor of Wall Street.

“Six megabanks now control two-thirds of the financial sector in our country, and reaped record profits of over $170 billion in 2016. That’s too much power in too few hands….

“This week, Congressman Jones and I proposed to table the current legislation and replace it with our bipartisan bill, the [Return to] Prudent Banking Act, which reinstates Glass-Steagall protections by separating prudent banking from risky Wall Street banking that tanked our economy in 2008.

“The Rules Committee refused to allow our bill a vote. Nevertheless, we remain resolute. Glass-Steagall is something President Trump ran on, as did Bernie Sanders, and in 2016 both the Republican and Democratic platforms enshrined the policy of restoring Glass-Steagall protections.

“Americans should know there is a growing bipartisan consensus fighting to protect the progress we have made, rein in Wall Street, and keep the wolves at bay and out of your pocketbook.”

As Kaptur said: “Congress must not wait—the chance to restore Glass-Steagall is now.”