Conditions Overripe for an Infrastructure Bank

July 24, 2019—Conditions are overripe, so to speak, for the adoption of a $4 trillion dollar National Infrastructure Bank, whose updated text I reprint below. Indeed, any delay will only worsen the consequences of an inevitable collapse of an aspect of our crumbling basic infrastructure, our bloated-to-bursting financial system, and/or our body politic.

Infrastructure. While we have not seen any headline-grabbing, life-threatening infrastructure breakdowns in recent months, the results of neglect and non-investment are eating away our substance. The most prominent example is the effect of the massive flooding in our agricultural heartland, the Missouri and Mississippi River valleys. The recent power outage in Manhattan was also a serious harbinger of more massive collapses to come from our frayed electric grid. More hidden are the small failures—huge sinkholes in various highways, small bridge collapses, hospital shutdowns,[1] burgeoning homelessness in our major cities; the list goes on and on. These breakdowns erode our productivity, lives, and living conditions without fanfare. 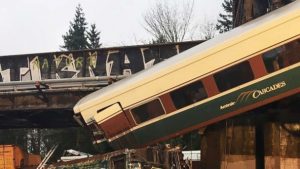 The 2017 Amtrak derailment in Washington State–more is coming without a massive infrastructure upgrade.

It’s been a minor miracle that we have had no dramatic failure in our transportation system around New York City, or in our water management system. Shall we waiting for such a disaster before we act?

As this blog has argued, successful economic growth, such as that carried out in the major periods of our history when the American System of economics has prevailed, requires fostering technological innovation on a broad scale, including in national infrastructure projects. Such innovation feeds new levels of productivity through the economy, an upgrading of skills of the workforce, and higher morale and conditions of life.

Finance: While some may delude themselves that the current financial bubble can keep growing indefinitely, that would be foolhardy indeed. A sound financial system is grounded in the physical economy of the country—and our physical economy is anything but sound. What good does it do to have millions of dollars if the economy is not producing the food, housing, or other goods and services which are required to live? Lacking a long-term perspective, the jobs that are being created are here-one-day, gone-tomorrow (not to mention that most are still too low-paid to provide a living for a family). Today’s Wall Street speculative bubble, increasingly based on junk bonds, shaky corporate debt, and other money-printing, is leading to new alarm bells being sounded for a crash worse than that in 2008. 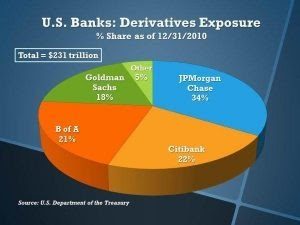 Where the Big Six U.S. megabanks are spending their money: derivatives gambling.

How will an infrastructure bank address this crisis? First, by re-purposing valid Federal debt into credit for physical production, and second by producing the value and productivity in the economy which will bring prices, and thinking, “down to earth.”

Politics. It would be foolhardy to presume that major campaign for massive investment in upgrading our nation’s infrastructure would quickly heal the deep fissures now renting our body politic. However, I would argue that there can only be national unity around a national purpose. Just wars, such as that against fascism, have often provided that purpose, but today no war is justifiable or necessary. Our national unity must involve coalescing around major national goals, such as extending man’s power in space, linking the nation with high-speed rail, and revolutionizing our power infrastructure through nuclear fission and fusion energy.

To carry out such a mission, we need a National Infrastructure Bank based on the principles of economy (not just finance) set out by Alexander Hamilton. You can read my book, Hamilton Versus Wall Street, for a fully-developed account. 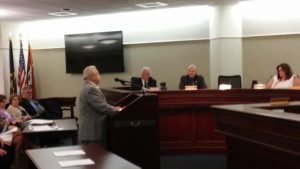 But what I present here is the latest version of a draft bill for the kind of bank that is needed.  City councils and national civic organizations (such as the National Congress of Black Women, the Democratic Municipal Officials, and the National Federation of Federal Employees) have endorsed this concept, and state legislatures have been discussing this proposal over the last years. Many officials and civic leaders have sent letters and even Memorials to Congress demanding action on this draft legislation.  I urge you to read it and circulate it as well.

To Create a National Infrastructure Bank

(e) The National Infrastructure Bank shall be chartered under the legislated means for carrying out the powers of Congress related to the purposes specified in Article I, Section VIII of the Constitution of the United States.

(a) By this legislation, the Congress authorizes the creation of a public corporation to be called the National Infrastructure Bank (“The Bank”) which is authorized to: provide credit for major national projects of infrastructure including, but not limited to surface transportation and ports, water management and supply, including providing safe drinking water, drought prevention, flood prevention and storm protection, emergency housing construction for low and moderate income families, electrical energy production and distribution, space exploration; make loans to agencies of the United States authorized for such projects; enter joint ventures with agencies of other nations to provide credit for major international projects of new infrastructure; provide credit to state and municipal capital projects by purchase of municipal bonds as issued; discount bank loans to businesses participating in such projects; and cooperate with the United States Export-Import Bank to provide trade credits to businesses engaged in international infrastructure projects.

(b) Projects funded by the National Infrastructure Bank would expand Buy America provisions, protect and encourage the use of Project Labor Agreements, require the use of Davis-Bacon prevailing wage standards, and ensure racial and gender equity in hiring.  The Bank will guarantee investment in disadvantaged communities most in need, in urban and rural jurisdictions. It will target high-poverty communities, including census tracts with high poverty rates.  The Bank will adhere to the 10/20/30 formula, as enunciated in Congress, to alleviate persistent poverty.

(c) Pursuant to Section 2, part b, the Bank will comply with the Civil Rights Act of 1964, Title VI, “that no person in the United States shall, on the ground of race, color, or national origin, be excluded from participation in, be denied the benefits of, or be subjected to discrimination under any program or activity receiving Federal financial assistance.”  Since the Bank will be backed by the “full faith and credit of the government of the United States”, this statute will be enforced.  This will apply to hiring practices and to awarding contracts to build the projects.

(d) The Bank shall also accept deposits from individuals and corporations.  It is authorized to receive repayment of loans into the Bank, and to re-circulate those funds into new or ongoing infrastructure projects.

(e) The Bank will be regulated by the Office of the Comptroller of the Currency.

(1) outstanding Treasury securities of three (3) years or greater maturity, and

who shall subscribe these securities as stock in the Bank, and shall receive in exchange, preferred shares in the Bank, callable during a period of 20 years only by the Bank, bearing fixed annual dividend to be determined by the Bank’s Board of Directors, but not to be less than four (4)% per annum; dividend and redemption payments on the shares of the Bank to be guaranteed by the U.S. Treasury.

(b) The Treasury shall be an “on-call” subscriber to the Bank in an amount up to $100 billion in new issues of thirty (30)-year U.S. Treasury bonds, and shall receive the same preferred shares in exchange.

(c) The Bank is hereby authorized to create circulating funds equal to the amount of each infrastructure loan made, subject to a total limit for all loans equal to the total capital subscribed to the Bank in the form of outstanding Treasury securities under Section 3 (a) (1) above.

(d) The Bank shall be authorized to receive U.S. government revenue deposits, specifically of the proceeds of the Federal tax on gasoline (the National Transportation Trust Fund), as a fund with which to pay the interest on its preferred stock.  The Bank shall also receive U.S. Government appropriations dedicated to service the interest on the preferred stock.

(e) The Bank shall receive into its circulating deposits, regular interest payments from the U.S. Treasury at intervals of one hundred and eighty (180) days on the outstanding Treasury securities which have been subscribed as capital in the Bank.

(f)  State and municipal agencies which receive capital project support through purchase by the Bank of municipal capital bonds, shall be required to keep on deposit at the Bank, five (5)% of the proceeds of such bond purchases, until the completion and final commissioning of the project involved.

(g) The Bank shall be authorized to borrow from the discount windows of the Federal Reserve Banks for periods of up to one year, against state and municipal capital bonds which it has purchased.

(h) The Bank shall be authorized further to raise borrowed capital for its project investments from the public, from commercial banks and business corporations, pension funds, and from investment funds, by issuing additional debenture bonds up to a total equal to its subscribed capital; these liabilities of the Bank shall have a guarantee from the United States Treasury; the bonds of the Bank shall be qualified for purchase by commercial banks operating under Glass-Steagall standards, and shall be discountable at Federal Reserve Banks.

(i)   Subscribers to the capital of the Bank who are not U.S. citizens or U.S.-based institutions shall be non-voting shareholders.

(a) The National Infrastructure Bank shall discount loans to participants in approved projects, made by commercial banks operating under Glass-Steagall standards of regulation. The rate of discounting of loans shall be determined by the Bank’s Board of Directors, but shall not be less than 50%.

(a) The majority of loans and discounts made by the Bank should coincide in maturities with the time periods of anticipated profitability and projected useful life of the projects and new facilities financed with such loans and discounts.

(b) The Bank may make loans to companies involved in manufacturing related to the purposes of Section 2 for additional needs of capital expansion, where those companies can show that the additional capital cannot be obtained from local or regional private commercial banks.

(c)  The Bank may extend the time for payment of a loan, through renewal, substitution of new obligations, or otherwise, with the maximum time for such renewal to be established by the Bank’s Board of Directors. The Bank may make such further loans for completion of projects or additions, improvements, and extensions necessary for the proper functioning of the project, or which will increase assurance of the borrower to repay the entire loan or loans.

(d) The Bank may make loans which are initially in cooperation with other lending institutions, participating in such loans by up to 50%.

(e) The Bank shall not purchase public debt of the United States as issued, nor make any loan on the pledge thereof.

(f)  The total amount of the debts which the Bank shall owe at any time may not exceed the capital stock of the Bank plus its deposits, unless the contracting of a greater debt shall have been authorized by an Act of Congress.

The Directors of the Bank shall establish an office of lending, discount, and deposit in each of the Federal Reserve Districts, and in any other state where Congress may require it by law.

SECTION 7: BOARD OF DIRECTORS

(b) The Directors of the Bank, at their first meeting, shall decide on the schedule of their periodic meetings, and on a rotating Executive Committee which shall have authority to approve infrastructure projects, including international agreements for projects of particular importance, between regular meetings of the Board.

(c) Investors in stock of the National Infrastructure Bank who reside overseas will be prohibited from membership on the Board of Directors of the Bank.  Only those stockholders of the Bank who are United States’ citizens will be permitted to vote at shareholder meetings.

SECTION 8: AUDITS AND REPORTS TO THE PRESIDENT AND CONGRESS

[1] 102 rural hospitals have shut down over the last year and a half, most in the South.