June 7, 2018–Fifty years after the assassination of Senator Robert F. Kennedy, on June 5, 1968, an historic tribute was held for the fallen Senator in Washington, DC.  A prestigious array of speakers, several of whom worked with Kennedy’s presidential campaign, and were at the Ambassador Hotel the night he was killed, shared their memories before a packed audience at Busboys & Poets in Washington, DC. (View photos of the event here.) 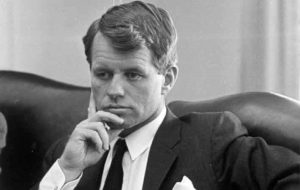 The event was organized to explore the turning point of 1968, in which the hope of civil rights and economic justice met the tragedy of assassination and the plunge into endless war in Vietnam. All of this converged around the courageous leadership of the Reverend  Martin Luther King, Jr. and Senator Robert F. Kennedy. That ended on June 5, 1968, when Sen. Kennedy was gunned down in California, two months after King met a similar fate in Memphis.  The forum revisited both the historic cauldron of 1968, and the urgency for a new progressive agenda for 2018 which can realize the dreams and policies embodied by the Kennedy Campaign.

The tribute convened with a fifteen-minute video clip from the time that both great men were assassinated: King in Memphis, with his “Mountaintop” speech the night before he was killed, and Kennedy’s acceptance speech in L.A. after winning the California primary.  In between these two videos, the audience heard the extemporaneous remarks RFK delivered in Indianapolis the night that Dr. King was murdered.

Congressman James Slattery: (D-KS) Former six-term Democratic congressman from Kansas, who was involved in the Kennedy presidential effort and present when Sen. Kennedy kicked off his campaign in his state. 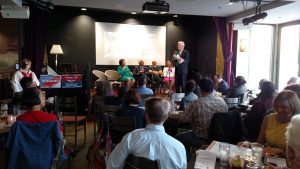 Delegate Elizabeth Guzman:  (D-VA) One of the two first Hispanic female members of the Virginia House of Delegates, and a dynamic spokesperson for progressive politics.  She was tapped by Democratic Leader Nancy Pelosi this year to deliver the National Hispanic rebuttal to President Donald Trump’s State of the Union Address.

Dolores Huerta: Founding member of the National Farm Workers Association with Cesar Chavez.  She is a national leader of the labor, civil rights, Hispanic, women’s, and human rights movements. She campaigned with Bobby Kennedy in California in 1968, and was with him at the Ambassador Hotel. 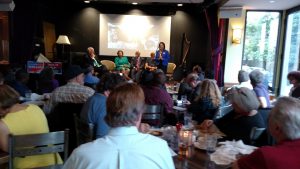 Hilary Shelton: Director of the NAACP Washington Bureau, and Senior Vice President for Advocacy and Policy. He is the lead legislative and policy advocate for the 500,000 person national civil rights organization, and has been in the forefront of all major civil rights legislation in the country for over twenty-five years.

Rudy Arredondo:  President, Latino Farmers and Ranchers National Trade Association.  He has worked for the Democratic National Committee, United Farm Workers, and many other organizations. In 1968, he was deployed by the United Auto Workers into Bobby Kennedy’s Presidential Campaign.

Congressman James Slattery began by saying “I think Bobby Kennedy would be very proud and happy to see citizens here this evening, assuming your duties and responsibilities as citizens by being involved in this conversation. Bobby believed very strongly that each of us has a duty as a citizen of this great country.”  He then recounted his vivid memories of Kennedy’s first campaign stop in Topeka, Kansas.  “As a young Democrat,” Slattery said, “Robert Kennedy was my first political inspiration….  I happen to be an Irish Catholic;  my father was a Kansas farmer, and an FDR Democrat to the core…. He used to recount to us the night that Franklin Roosevelt turned on the lights in rural America.”

“Bobby did what politicians rarely do,… He took responsibility for the role he played in the early days of Vietnam.” He spoke with great moral authority about the war in Vietnam and acknowledged that he had to take personal responsibility for what was going on there. Slattery then quoted Bobby saying, “That the greatest sin is the sin of pride; great men admit their mistakes and correct their direction.”  With one day to organize, 20,000 people showed up to hear RFK in the Republican state.

Delegate Elizabeth Guzman, although too young to know RFK, referred to the historic events of 1968, saying, “After fifty years, we wish we had made more progress.”  She quoted Kennedy on how unions built the Democratic Party and its values, and that the party is based on the working class.  She attacked Virginia as a Right-to-Work state, and laid out the agenda of the Progressive wing of the Democratic Party for the upcoming elections in 2018 and 2020.

Hilary Shelton focused on how Bobby Kennedy was ahead of his time.  He praised Kennedy for having the courage to change his mind and for making real the issues of poverty and racism by taking a camera crew to the Deep South.  He thanked Bobby for his unique role in preventing nuclear war during the Cuban Missile Crisis and for his fight to eliminate the death penalty.
Shelton then turned to the issue of gun violence, detailing the out-of-proportion statistics of gun violence and deaths among African-Americans.  He said that from 1964-68, Bobby was already calling for gun control. He was right, and he understood the problems we’re fighting today. As young people say today, “It’s not about a moment, it’s about a movement.” And that movement has to be against all forms of violence, Shelton said. When King came out against the Vietnam War, Bobby Kennedy said, “What Dr. King said on April 4, 1967 at Riverside Baptist Church in New York City, was that as long as men are driven by the call to patriotism to fight in wars and to lift them up in a way they did, that the war on poverty could not truly be fought. …  Kennedy had a true vision for the solution fifty years ago. . . Bobby was right then, and he is right now,” Shelton concluded. 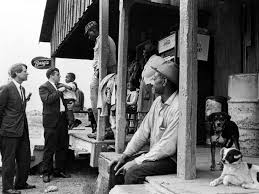 Bobby Kennedy visiting the Mississippi Delta during his campaign.

Dolores Huerta began by saying that this was the third commemoration of RFK’s assassination she had attended. One was where the Ambassador Hotel used to be, which has now been turned into a Robert Kennedy community school.  Earlier that day she attended an awards event with the Kennedy family, where three groups of young people were honored: Indigenous, African Americans, and DACA students. She urged the audience to help “keep Robert’s memory alive.”  “He was a uniter, not a divider.”  “He knew poor people.”  She referred to a new documentary named for her, “Dolores”, which includes wonderful footage of RFK.  Huerta spoke of her co-founder, Cesar Chavez, and how Kennedy visited him on his last day of fasting.  She said the farm workers were all shouting, “Kennedy for President.”  She said that in Los Angeles they had to close the polls early because everyone had voted.

Huerta encouraged people to listen to the speech RFK gave on the day he announced for president.  She implored the audience to “promote his words, his values; there is so much inspiration in those words.” She said “we are fighting the same battles today as we did in 1968, and much of what we gained is being rolled back.”  Huerta ended by quoting the Chilean poet Pablo Neruda: “They can cut off flowers, but they can’t roll back the Spring.” 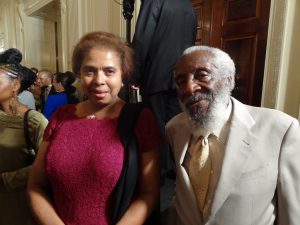 Dr. E. Faye Williams began by announcing that she is a disciple of Dick Gregory, and that Gregory warned her that if you don’t “Wake up and stay Woke,” the country would descend into violence and chaos.  Williams was in California in ’68, and she reminisced on the MLK assassination, and how she was still “reeling” when she started working for Kennedy. She delivered a powerful account of June 5, 1968, when she and her friends were on the lawn of the Ambassador Hotel singing, “This Land is Our Land,” and then we heard “pop, pop, pop.” She said, “We went from the highest high, to ‘Bobby has been shot’.”  She said: “We were living in chaotic times; they first killed, JFK, then MLK, Malcolm, Medgar, and then Bobby.” After Kennedy’s death she committed herself “to do everything Bobby would’ve done.” “We are going to make America great for everyone–not great again because America has never been great for many of us.”

Reverend Graylan Hagler unleashed with a fiery speech.  Although only fourteen in 1968, he spoke of how he, his father, and brother were standing at the railroad station to watch the arrival of the train with Bobby’s body.  As the station was not yet integrated, he was on the black side of the track.  Hagler professed, “We’ve never dealt with the race issue in the United States.”  He then shocked the audience by going into a big attack on Bobby, detailing his involvement with the McCarthy hearings, his attack on unions, and his calling for surveillance of Dr. King.  The Reverend attributed Kennedy’s problem to his New England background, being wealthy and white, and how he didn’t understand people of color, whether they be blacks or Latinos. 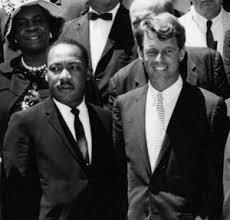 Hagler then shifted course. It took a tragedy to wake Bobby up to the fact that he was not part of a paradigm he thought he was protecting, he said.  And “that those were the elements that killed his brother, Martin Luther King, and would eventually kill him.” Hagler then praised Kennedy’s metamorphosis and said that that he had to grow out of that model of white supremacy.

The Reverend confronted his listeners: “That’s hard for us to hear, but we never challenged the system.”  He repeated that last part twice.  He said, “Here we are fifty years later, and we still have work to do.”  Reverend Hagler is currently the co-chair of the Poor Peoples’ Campaign, and is taking up the fight of Dr. King.  He attacked U.S. violence abroad, and called for “freedom for people at home and around the world.”

Anti-war activist Medea Benjamin began by quoting RFK, “We shouldn’t be the arms exporter of the world.”  She attacked both the GOP and Obama for sending arms to the Saudis.  She went on to attack both Obama and Trump for the atrocities ongoing in Yemen.  She said although Obama was good on the Iran Nuclear Deal, the Democrats cravenly hope that Trump fails on North Korea, because they don’t want him to have such an accomplishment under his belt before the November election.  She said, “This is not about party.”  “This is about human lives.”  “This is about seventy years of conflict.”  She said, “As we remember Bobby Kennedy, we need the kind of people in the streets now as we had in 1968.”

Rudy Arredondo identified himself as a DACA “Dreamer,” as he was three years old when his parents brought him to the U.S.  He said that he got into politics because of JFK.  Rudy talked about his membership in several different unions, and detailed the fight in 1968 between Walter Reuther and George Meany, on who they would support for president, a fight which split the AFL-CIO.  The Latinos and the African Americans went for Kennedy.  He thanked Busboys & Poets for hosting the event, as it was a busboy who held Bobby’s head as he was dying.  Arredondo said, “It’s incredible we have arrived at this juncture, where we have rodents in the White House, who only care about making money, and have no moral standards.” 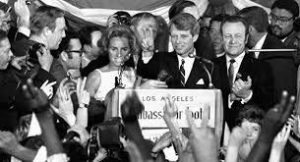 RFK in California the night he was shot.

Without question, the evening’s proceedings captured the revolutionary spirit of both Senator Robert F. Kennedy and Dr. Martin Luther King, and the events of 1968, and made it crystal clear what is lacking from U.S. politics today.

The event can be viewed on utube. https://youtu.be/PY0_vhgPryc