Feb. 15, 2019—Enraptured by the Hamilton musical? Eager to learn more about the Founding Father that many leftists love to hate? Or just downright disgusted with the fact that the U.S. Congress can’t seem to figure out how to rebuild our economy?

If so, I have the book for you. Its full title is Hamilton Versus Wall Street, The Core Principles of the American System of Economics. It is focused on the major contributions Alexander Hamilton made to creating and building the American nation, and how those principles can be applied today. Using Hamilton’s major state papers, especially his Report on Manufactures, I elaborate on the key elements of his system, and then pursue the trail of those great American statesmen who implemented his American System: John Quincy Adams, Abraham Lincoln, and Franklin D. Roosevelt. 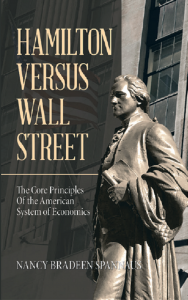 I present Hamilton as a “revolutionary visionary,” and consign the slanders that he was an advocate of British finance to the garbage can where they belong.

“In our time of crumbling infrastructure, anemic economic growth, and dysfunctional government, Spannaus points to a better path, the American System of economic policy initiated by Alexander Hamilton more than two centuries ago. Hamilton encouraged long-term investment and productivity growth, and discouraged short-term speculation and financial instability. His policies made America great, and a return to them can make America great again.”

This 244-page volume, complete with index, is being published by iUniverse, a self-publishing company, and will be available in soft cover and all varieties of e-books. iUniverse’s retail price is $13.99 for the print edition, and $5.99 for electronic edition.

Hamilton Versus Wall Street is expected to be available for order at iUniverse.com during the course of next week.  Shortly thereafter, it will be available through Amazon, Barnes & Noble, and other retail sites.