Aug. 20, 2020—Democrats looking for a comprehensive solution to the economic crisis that is threatening the very integrity of the United States as a nation, had a place to turn during the virtual Democratic National Convention this week. In a webinar featuring local union leaders, state representatives, convention delegates, DNC members, and political activists from coast to coast, the Coalition for a National Infrastructure Bank (NIB) presented a lively discussion of how such a bank can create 25 million jobs rebuilding the country. 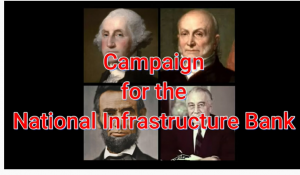 The chief thrust of the presentations was to explain and promote H.R. 6422, a bill for a National Infrastructure Bank which was introduced into the U.S. Congress on March 31 by Rep. Danny Davis (D-Ill). In four panels, the webinar speakers elaborated on the workings of the bank, what it can accomplish, and their organizing for its enactment. The prerecorded four-panel event was aired on Monday and Tuesday, and then was followed on Wednesday the 19th with a live panel discussion in which convention delegates could participate.

As of this writing, the webinar has recorded more than 600 views.

A DNC representative introduced the event, which had been advertised on the official Convention agenda. He cited that fact that the Democratic Platform affirms the party’s support for an infrastructure bank.  But what will be, and should be, the content of such a bank?  That was then elaborated in the panels that followed.

I should add that the Coalition’s board members  emphasized that the bill should not be seen as a “Democratic” proposal, but one for all Americans who are looking for a solution to the current crisis.

I highly recommend watching the event, which can be accessed in this youtube replay.[1] In the rest of this post, I will touch on a few salient points.

It’s Been Done Before

The first panel featured three members of the Coalition’s Advisory Board and an expert on FDR’s Reconstruction Finance Corporation. What came through loud and clear is that government financing for major infrastructure projects through national banking is a tried and true American tradition. Indeed, the approach advocated by the Coalition, and H.R. 6422, was inaugurated by First Treasury Secretary Alexander Hamilton, when he turned the crushing war debts of the young United States into capital for the First Bank of the United States. The Coalition’s bank proposal would be able to issue up to $4 trillion in credit, and thus is the only proposal under discussion with sufficient scope to turn the U.S. economy around.

All the speakers – especially Coalition Advisory Board members macro-economist Alphecca Muttardy, retired trade union organizer Bob Lynn, and retired Amtrak executive Stan Forczek – provided succinct, easily understandable outlines of how the bank would work. I was particularly struck by Forczek’s emphasis on how the shift of mindset of the American political leadership has sabotaged crucial infrastructure development.  Leaders like Hamilton and FDR were focused on what needed to be done for the health of the nation, not on the cost, he stated. Today we bicker over cost, and delay crucial projects, with disastrous results.

The second panel featured five labor leaders who discussed the role of labor in mobilizing for the Infrastructure Bank, and what such a substantial investment could do to revive manufacturing and productivity. Particularly exciting was the presentation by a rail expert who outlined the high-speed rail projects already underway which could be rapidly completed with adequate funding.

One of the leaders made an absolutely critical point during this discussion. She noted how the revival of the economy has historically led to a decrease of the kinds of tensions (racial and social) which the United States is now experiencing, as people get the opportunities to have good paying jobs, and to work together to accomplish worthwhile projects. Just one more reason to support the National Infrastructure Bank H.R. 6422.

Panel Three consisted of a discussion among five local and state elected officials. They came from Rhode Island, Pennsylvania, Michigan, South Carolina, and Virginia.  Many had already introduced, and in the case of South Carolina, passed, memorial resolutions urging Congress to establish a National Infrastructure Bank. In numerous cases, these legislators have been working for four years to educate their fellow citizens on the necessity for this move.

What became clear is not only that these localities are in urgent need of assistance, especially in the dramatic downturn caused by the current pandemic, but also that only a massive investment will be able to meet these needs across the nation. As I know from my own discussions with local officials, many localities have spent years applying for aid from the Federal government to meet urgent local needs; without a bank on the scale of the NIB, it just won’t and can’t happen.

I remember the case of Lynchburg, Virginia, in particular. The mayor told me back in the 1990s that the city’s water pipes urgently needed to be replaced; they were 150 years old. Yet in the competition for limited national funds, Lynchburg always seemed to lose out.  It was a disaster waiting to happen.

In the final panel, devoted to the urban and rural crises, spokesmen for organizations involved in trying to solve the infrastructure breakdowns in both cities and rural areas discussed how the NIB could meet their needs. There were representatives from the rural areas of the Southwest, the city of Detroit, and North Carolina, as well as a spokesman for the National Association of Minority Contractors.

This panel was moderated by Carl Holland, a young political activist who had been a delegate to the Virginia State Democratic Convention. Holland opened by saying how passionate he was about solving the economic crisis, especially for young adults.

In this discussion, I was especially struck by the participants’ emphasis on the importance of “thinking big” once again. One also usefully stressed the role the Bank’s program for training could play in giving a future to youth, who today are stuck between totally dead-end jobs (or idleness) and impossibly expensive college educations.

That’s a good note to end on: The NIB has the potential to give the United States and its citizens a prosperous future once again. As Advisory Board member Bob Lynn, who did the lion’s share of moderating the panels, emphasized again and again, the NIB is not just a good solution; it’s the only option on the table in this time of crisis. So, as he said, let’s get it done.

[1] The final panel, a free-for-all discussion of the Bank and its prospects, will be covered in a later post.