Jan. 16, 2018–It is inconceivable that the American System of Hamilton and Washington could have come into being without the role of elder statesman Benjamin Franklin. We celebrated Ben’s birthday on January 17; he was born in 1706 in Boston, and died in 1790.

Franklin represents everything unique and positive about the founding of the United States. A product of the republicans of Puritan New England, particularly the Mather family, Franklin developed as an ally of the Leibnizian faction in Europe, and participated in that faction’s political, scientific, and nation-building work. He established institutions for the general welfare of the population, from the first circulating library in this country, to the Constitution of the United States. He pulled together and coordinated an international network of scientists and political leaders, who not only helped win the American Revolution, but played a crucial role in advancing science, and the industrial revolution, throughout Europe, and for the world as a whole.

Yet Franklin’s crucial role has been suppressed. Why? Because anti-republican forces have taken over our culture, to the point where any “great man” (or woman) is denigrated as “anti-democratic.” This populist perversion has become particularly strong in the wake of the life of Franklin Delano Roosevelt, and among the current Baby Boomer generation. Yes, indeed, many individuals should take on the world-historical commitment of leadership in politics, science, and economics, but they have not done so. Instead, their efforts have gone into tearing down those leaders who have challenged them to restore our republic to the ideas of Benjamin Franklin and Abraham Lincoln. That makes them “feel” better, as they pursue their own petty concerns.

It’s long past time this idiocy be stopped.

Born in Boston, Massachusetts into a family of 17 children, Ben Franklin had the benefit of encountering the culture of that colony’s republican faction, around Cotton Mather, very early. He drank it in voraciously, and there is compelling evidence, presented by historian Graham Lowry in his invaluable book How the Nation Was Won, that young Ben became an agent of the Mathers, and their Leibnizian collaborators in Massachusetts, New York, and Pennsylvania, as early as 1722. Franklin was well on his way to becoming a world leader.

Franklin was 18 when he took his first international trip, to London, on behalf of this republican network. Ultimately, this man—who wanted to be remembered in his epitaph as a simple printer—spent about 20 years in Europe, all in service of securing the requirements for the revolution he was attempting to carry out.

Few have identified the scope and impact of this network. Most obvious are those whom Franklin, America’s premier ambassador, recruited to come to America, in order to serve the revolutionary cause—Mathew Carey, Tom Paine, the Marquis de Lafayette, and Kosciusko, among others—or whose direct support for the revolutionary war effort he secured, most especially in France. But the less visible networks of scientists and industrialists and political operatives must also be noted, and they are quite extraordinary, ranging from the English circles who made the so-called industrial revolution, to the scientific and pro-industrial circles in France, to the intellectual and republican elite in Germany. 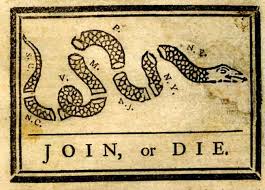 Franklin’s cartoon, published in the 1750s.

Of course, given the lack of unity among the American colonies, Franklin had to undertake the task of coordinating among them as well, building the scientific and political networks who would form the core of the new nation. This activity began as early as 1727, when Franklin established his Junto in Philadelphia, a grouping of citizens devoted to discussing scientific and political affairs, and how to spread their ideas. Between then, and 1743, when he established the American Philosophical Society, to coordinate among intellectual leaders in the various colonies, Franklin worked on establishing a network of scientific collaborators internationally, with whom he corresponded and shared hypotheses about matters of electricity, weather, and theoretical questions.

Increasingly, in the same period, the by-now-well-established printer was playing a role in the government of Pennsylvania, and establishing various institutions for the general welfare, from schools, to libraries, to the fire department. He took a hand in organizing a militia, when required to defend the citizens from the Indians, and, from 1737 forward, served as the Postmaster for Philadelphia.

By 1754, Franklin had begun to think of the establishment of a nation, as a number of the colonies came together to consider the Albany Plan of Union, in upstate New York. Franklin’s plan for unity under a single governor, with taxing power, was vetoed both by the British Parliament and local governors. It would not be until 1787, when Franklin played a quiet, but guiding role in the Constitutional Convention, that his vision of a united America would prevail.

Back in the 18th Century, Benjamin Franklin was lionized in Europe as the “American Prometheus.” The sparks of his intellectual genius, as well as the practical work which he had done on electricity, were understood as world-historical accomplishments. What a contrast this appreciation is, to today’s idea of Franklin as a dealer in “practical tips” of all sorts!

Sure, the publisher of Poor Richard’s Almanack did indeed dispense advice about “the way to wealth,” along with a wealth of wit. But, seen in the context of the nation-building and scientific-network-creating which this same man was engaged in, Franklin’s publishing has to be understood as an aspect of building a constituency for his life’s work.

What Franklin was committed to was doing good, and creating the institutions which would continue that good far beyond his own lifetime. His inspiration, as he himself expressed it, came from Cotton Mather’s Essays To Do Good, a book published in 1710, and was consistent with the work of the other universal genius of this time, the German philosopher Gottfried Wilhelm Leibniz, in attempting to improve mankind through science and statecraft. Leibniz, who was also a scientist, legal adviser, and economist, and who built an international network reaching into England and the American colonies, as well as the rest of Europe and Russia, died in 1716, and, in a real sense, Franklin can be understood as picking up on his work.

Thus, we properly understand Benjamin Franklin as our Leibnizian Founding Father, a universal genius who pulled together the cadre for building a republic with the potential to do good to all mankind. As we celebrate his birthday, we must commit ourselves to his mission, which he expressed, in a letter  written in 1753, as follows:

“For my own part, when I am employed in serving others, I do not look upon myself as conferring favors, but as paying debts. In my travels, and since my settlement, I have received much kindness from men, to whom I shall never have any opportunity of making the least direct return, and numberless mercies from God, who is infinitely above being benefited by our services. Those kindnesses from men, I can therefore, only return on their fellow men; and I can only show my gratitude for these mercies from God by a readiness to help his other children and my brethren. For I do not think that thanks and compliments, though repeated weekly, can discharge our real obligations to each other, and much less those to our Creator. You will see in this my notion of good works, that I am far from expecting to merit heaven by them….

“The faith you mention has doubtless its use in this world. I do not desire to see it diminished, nor would I endeavor to lessen it in any man. But I wish it were more productive of good works than I have generally seen it; I mean real good works, works of kindness, charity, mercy, and public spirit; not holiday-keeping, sermon-reading or hearing, performing church ceremonies, or making long prayers, filled with flatteries and compliments, despised even by wise men and much less capable of pleasing the Deity….

“Your great Master thought much less of these outward appearances and professions than many of his modern disciples. He preferred the doers of the word, to the mere hearers; the son that seemingly refused to obey his father and yet performed his commands, to him that professed his readiness, but neglected the work; the heretical but charitable Samaritan, to the uncharitable though orthodox priest and sanctified Levite; and those who gave food to the hungry, drink to the thirsty, raiment to the naked, entertainment to the stranger, and relief to the sick, though they never heard of his name, he declares shall in the last day be accepted, when those who cry Lord! Lord!, who value themselves on their faith, though great enough to perform miracles, but have neglected good works, shall be rejected….”