July 20, 2018—Forty-nine years ago today, the United States took a “giant leap for mankind” when its astronauts successfully landed on the Moon’s surface. They not only walked on that heavenly body, but within days returned safely to Earth once again.

It took an enormous nationwide effort to achieve this stunning result, as I laid out in a post a few months ago.  Americans everywhere felt they were part of the achievement, as they looked heaven-ward on July 20, 1969 and saw new worlds open up before them. 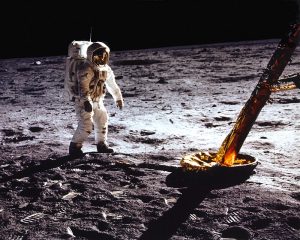 NASA still celebrates this milestone. Today it released a teaser for a film apparently 50 years in the making, entitled “Apollo 11.” It will document with never-before-seen footage one of humanity’s greatest accomplishments sometime between now and the Landing’s 50th anniversary next year.

Yet there are no national celebrations today appropriate to this occasion. Instead, despite some inspiring rhetoric from the White House early in Trump’s term, NASA’s mission of expanding human space flight and exploration is at a standstill, as Congress and the Administration seek to shift responsibility to the private sector for the next steps. There are even calls for “cutting bureaucracy” that are raising fears that safety will be compromised in future missions.

The appropriate way to celebrate the Moon landing is to once again commit our nation to a crash program similar to that of Kennedy Apollo program. That program itself was intended to be a stepping stone to broader space exploration, and going to Mars. Today’s objective should still be to use the Moon as a base for exploring the worlds beyond.

If you think we can’t afford such stunning achievements today, think again. American System economics has shown that investment in science drivers like the Moon Landing creates leaps in our productivity (especially of the human mind), making the impossible possible.  It’s much past time we did it again.