Beyond the Los Angeles Teachers’ Victory

Jan. 27, 2019—On Jan. 22 one of the largest teachers’ unions in the country won a significant victory after a six-day strike. United Teachers Los Angeles won a six percent raise, and a number of improvements in school conditions, including commitments for smaller class sizes, more nurses, more counselors, and more librarians. As with the strikes in West Virginia, Arizona, and Oklahoma last year, the union aggressively organized support among parents and students, utilizing the perspective pioneered by the Chicago Teachers? Union called “Bargaining for the Common Good.” 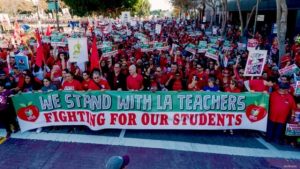 A demonstration on the eve of the LA Teachers’ Strike

The Los Angeles strike is expected to be followed by several other teachers’ actions this spring. Denver teachers have already voted to strike, but have been enjoined by the state, which invoked a mediation process which the teachers will contest. The Oakland, California Education Association has scheduled a strike vote for Jan. 29, and could go on strike as early as Feb. 2. Virginia teachers have called for a one-day walkout tomorrow, during which they will lobby the state legislature for raising teacher salaries and restoring education funding to pre-recession levels.

These actions reflect the extreme frustration of teachers and parents alike about the state of public education in the United States. As this blog covered previously, state education budgets took a huge hit during the 2008 crash, from which they have not recovered. In the meantime, the billionaire philanthropists who promote and fund the charter school movement have stepped in to capitalize on the miserable conditions of the public schools. In places like Los Angeles. Denver, and Oakland, privately run but publicly funded charter schools have undergone a huge jump in enrolment.

According to spokesmen for United Teachers Los Angeles who were interviewed on Labor Notes at the beginning of the strike, a moratorium on the expansion of charter schools was one of the major demands of the Los Angeles strike. Since 2008, there has been a 287% rate of growth of charter schools in LA, said Mark Ramos, a high school history teacher. Charter schools, which could also be called privatized schools, have great leeway in setting their own rules, are usually non-union, and yet receive the same monies per student.

Meanwhile, the public schools have undergone increasingly worsening conditions. Some high school teachers have 40-46 students per class, and 80% of the schools have no full-time nurse, according to Gillian Russon, a high school history teacher interviewed on the Labor Notes show.

According to Labor Notes, the new LA Teachers contract call for the LA Board of Education to move a resolution calling on the state to put a moratorium on expanding charter schools.

The Charter School Movement vs. the American System

The growth of the charter school movement—which currently represents 6 percent of the public school population (3 million students) today, but is rapidly taking over a number of urban areas like Washington, D.C.—represents a head-on assault on the philosophy behind the American System. It is heavily funded by billionaires on both sides of the political divide—Democrat and Republican—in the name of dealing with the miserable conditions in underfunded public schools, especially in areas of color. According to the UTLA, billionaire Eli Broad has set up a training academy dedicated to preparing professionals to take over school boards throughout the nation and expand the charter school movement. The Eli Broad plan for Los Angeles, now stalled, was to expand charters to 50% of all “public” schools. 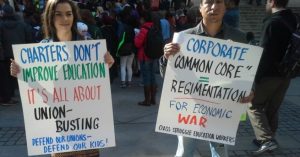 A demonstration against charter schools.

In effect, the charters end up pulling money away from public education, and exacerbating the inequality of educational opportunities. The “innovative” practices at the charter schools often lack public accountability, and most are non-union (a cost-cutting measure). In many cases charters have been known to screen out students with learning problems, and show much high suspension rates than public schools—which then are charged with taking on the more problematic students. (For a broader evaluation, click here.)

Public education has always been a hallmark of the unique American System of political economy and government from the earliest days. Literacy rates in America, and public support for educating especially the poor and working class, were notably high relative to that of Europe and other parts of the world, partly due to the value placed on education by Americans.

The Northwest Ordinances of 1785-87, for instance, made specific provision for education. The 1785 Ordinance, which laid out a grid of townships for the then-Northwest territory, stipulated that one section of each township be set aside for a school. And the 1787 Ordinance proclaimed that “Religion, morality, and knowledge being necessary to good government and the happiness of mankind, schools and the means of education shall forever be encouraged.”

That said, the availability of free public education, starting at the elementary level, was uneven at best. New England, especially Massachusetts, led the way in establishing free primary school education as early as the 17th century. Northern states pursued the program with energy after the foundation of the nation, although it took until 1870 for all states to have taxpayer-subsidized public education. The last region to provide for it, of course, was the South, where the slave system not only devalued, but actually stigmatized learning, especially among the African-American population.

Exemplary of the thinking of the Founding Fathers toward education was the devotion of men of such diverse political ideas as Ben Franklin, George Washington, John Adams, Thomas Jefferson, and Alexander Hamilton to fostering it in various ways. Franklin established the University of Pennsylvania, while Washington famously left a portion of his inheritance for the establishment of a national university. Jefferson founded the University of Virginia, and initially  attempted to pass a Virginia law mandating free primary school education, although his plan went only very partially into effect. Alexander Hamilton was involved in promoting the establishment of a national military academy, but also a school to educate African-American children. John Adams, who wrote Massachusetts’ post-Revolution Constitution, made provision for education an essential part. He is notably quoted, from 1785, as saying:

“The whole people must take upon themselves the education of the whole people and be willing to bear the expenses of it. There should not be a district of one mile square, without a school in it, not founded by a charitable individual, but maintained at the public expense of the people themselves.”

Adams’ provision in the Massachusetts Constitution of 1780 is also worthy of quoting:

“Wisdom and knowledge, as well as virtue, diffused generally among the body of the people, being necessary for the preservation of their rights and liberties; and as these depend on spreading the opportunities and advantages of education in the various parts of the country, and among the different orders of the people, it shall be the duty of legislatures and magistrates, in all future periods of this commonwealth, to cherish the interests of literature and the sciences, and all seminaries of them; especially the university at Cambridge, public schools and grammar schools in the towns; to encourage private societies and public institutions, rewards and immunities, for the promotion of agriculture, arts, sciences, commerce, trades, manufactures, and a natural history of the country; to countenance and inculcate the principles of humanity and general benevolence, public and private charity, industry and frugality, honesty and punctuality in their dealings; sincerity, good humor, and all social affections, and generous sentiments, among the people.” 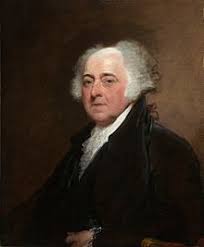 Of course, primary and secondary school education, and most college education, never became a Federal responsibility in the United States, having been left to the states and localities. But thoughtful adherents of the views of the Founders—such as Abraham Lincoln and FDR, for example–well understood the responsibility of the Federal Government to provide support for the localities, primarily by ensuring a thriving economy that could fund the efforts, educate the teachers, support premier scientific projects such as the Space program, and ensure that education was of a sort to contribute to the Common Good.

What the “Common Good” Demands

There is no question but that the teachers striking for better conditions for their students (and themselves) are concerned with the good of society.  But to be successful beyond the very short term, their sights have got to be raised beyond their local level, or even their state, and take on national economic policy.

While the idea of privatizing public education should be rejected, we have to deal directly with the environment that has led many to despair of the public schools, and turn to this corrosive alternative.

The miserable condition of such a large fraction of our public schools is a direct result of the collapse of our progressive industrial economy from at least the early 1970s. Financialization has taken over, with the results writ large in collapsing infrastructure, stagnant wages, and the huge swaths of social despair that has brought us the opioid epidemic and increasing death rates, among other ills. Without reversing that financialization process, our nation cannot afford to adequately fund a school system, and certainly not inspire youth en masse to contribute to the scientific and technological breakthroughs which we need to build a successful future.

There are two immediately accessible government measures which could begin this process. The first is restoring Glass-Steagall provisions to our banking system, those FDR-era measures that would separate commercial from investment banking and thus remove support for the big banks gambling with commercial deposits. Contrary to Wall Street propaganda, the repeal of most of the provisions of Glass Steagall with the Gramm-Leach-Bliley bill in 1999 was a major contributing cause to the 2007-2008 crash. Conditions for a repeat of that catastrophe are overripe today.

The second is the establishment of a source of public credit to rebuild the physical economy of the country, inclusive of providing for the education, training, and jobs that will be necessary to build a new modern infrastructure, solve the housing crisis, reduce inequality, and boost economic progress back to levels not seen for decades. The American System has established the principles needed to create such a source. A proposed National Infrastructure Bank based on those principles, currently circulating widely in political and policy circles nationally, can be found here.